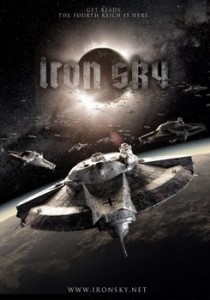 The best joke in the Finnish Nazis-on-the-moon movie Iron Sky is, ironically, also the one that best demonstrates the film’s weaknesses. Idealistic Nazi teacher, Renate Richter (Julia Dietze), shows her young class a sharply edited (ten minutes long) version of Chaplin’s The Great Dictator and, as the Jewish barber disguised as Hynkel dances with the globe, she proclaims to her pupils that it demonstrates Chaplin’s “wish that one day the entire world should be held in the great Fuhrer’s wise and gentle hands”. It’s a cute moment, but the problem in invoking Chaplin’s classic is that it reminds the viewer that if you’re going to make a comedy about Nazis, you really better have something important to say about them.

Iron Sky fails this test. Indeed the biggest problem with this film is that it doesn’t really understand Nazis at all, and certainly fails to grasp why we should continue to abhor them.

Iron Sky starts with an American space mission to the dark side of the moon that ends in disaster when the astronauts stumble across a secret Nazi base built in the last days of the war. The Nazis capture one of the astronauts, James Washington (James Kirby), and are shocked to discover, first, that he is black and, second, that his iPhone 1 contains more computing power than their entire base. The Nazis need computers to get their vast war machine operational so Nachrichtenubermittlungs-Oberfuhrer 2 Adler (Gotz Otto) and Renate go to Earth. However, Adler’s plans go beyond stealing some phones. He wants to dispose of the current Nazi leader, Kortzfleisch (Udo Keir), establish himself as Fuhrer and lead an invasion. On Earth Adler becomes entangled in American politics, using Renate’s naïve, well-meaning Nazi rhetoric (!) to deliver an election victory for a Sarah Palin-like American president (who comes complete with a stuffed polar bear in her Oval Office).

The key moment in the film’s clumsy attempt at satire comes when Renate delivers a stirring rendition of her ideology in the Oval Office, which morphs into the President delivering the same speech to the American people:

You can see what the film’s writers are trying to do. Right-wing Republicans are indistinguishable from Nazis! Geddit?

But, of course, this is bullshit.

For all the faults of America’s Tea Party movement – and they are far too many to enumerate here – they are not driven by a genocidal desire to pursue racial purity and a willingness to do anything, no matter how evil, to achieve their ends. They are not Nazis.

It is important to preserve the distinction between those whose politics we simply disagree with and genuine fascists. One of the goals of the current generation of fascists – groups like the English Defence League – is to make their extremism appear part of the mainstream of political debate. They are aided in this if we are careless with our identification of fascists and if we throw away the power of the words “Nazi” and “fascist” by using them casually. Worse, we make it easier for them if we do not understand what it is that marks them out as uniquely despicable.

For example, if you are going to make a film that features Nazis as your knockabout villains, you’d better make damned sure that your racial politics are carefully thought through. They’d better be impeccable.

That’s not true of Iron Sky.

Take the story arc of the film’s sole black character, James Washington. Washington is sent to the moon not because he is a qualified astronaut but because he is a model, designed to attract publicity. Washington is a caricature of a black man, he is a “jive-talking” idiot, irresistible to the Aryan princess Renate, who discovers responsibility and honour when he is turned into a blonde white man by Nazi scientists.  It’s so shockingly crude that you can’t help but wonder what the hell the people who made the film were thinking. 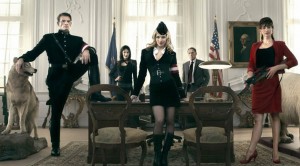 And then there’s the treatment of the Nazis themselves. Think, for a moment, about the purpose they serve in this film and their presence becomes distinctly disturbing. There is, of course, the crude satire on America but there are lots of ways that you could mock the Tea Party tendency in Republican politics without invoking German fascism. So: why Nazis? And the answer is depressingly obvious as you watch the film. Iron Sky displays a fetishistic obsession with the Nazi aesthetic that is, at times, deeply uncomfortable and extends to slow motion reveals of updated uniforms, as though in a fashion shoot. For all the film’s comic intentions, it is impossible to watch Iron Sky and not be aware of the glamour that it imparts to its space-Nazi villains and that is disturbing. It also undermines any element of satire that the team behind Iron Sky might have been reaching for.

To return to the contrast between Chaplin’s The Great Dictator and this film. Chaplin understands the enemy and mocks them at their weakest points – their pomposity, their cruelty and their stupidity. Chaplin, working in 1938 – before the worst evils of Hitler’s dictatorship were known, is never gentle with his target, never knowing, never remotely seduced by them. Chaplin’s final oration in The Great Dictator might weaken the film as a comedy but it reveals a filmmaker determined to use his access to an audience to say something brave and something profound. Judged against this standard, Iron Sky isn’t just a vapid, not-funny-enough comedy, it’s a film that makes a number of serious misjudgements and stumbles disturbingly close to endorsing the ideas it sets out to satirise.