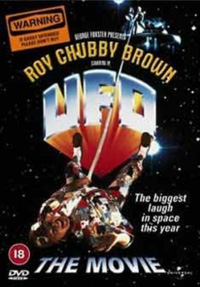 This issue we descend further into the pits of hell to bring Matrix readers the bad and the ugly in science ficton film. Join us as we reach a new level of terror and explore the tortured mind of troubled auteur Roy “Chubby” Brown through his seminal 1993 masterwork  U.F.O. The Movie.

This is just shit, isn’t it?
It certainly challenges one’s preconceptions of what is funny, but I think it is more enlightening to view the film as a post-modern challenge to what we call “the joke”. Take the opening sequence which features a supposedly humorous conjunction of bare arses and nuns, no one has laughed at anything like that since the 1970s. Assuming, as we must, that a modern performer will be aware of the inherent inanity of such a “joke”, we are forced to conclude that this is actually a deliberate attempt to create an inversion in our expectations, a post-joke, post-comedic commentary on what it means to be “funny” in the post-Soviet era.

So Roy “Chubby” Brown isn’t just a leering prick?
I think it is possible to see him as forming part of the great tradition of The Fool in motley, hence Chubby’s ludicrous clothing. It is a tradition that has passed down through the generations from the courts of the great kings of the Dark Ages…

I think you’ve mistaken an idiot for a Fool.
…The Fool is perhaps best known today through Shakespearean characters such as Bottom in A Midsummer Nights Dream, Touchstone in As You Like It and, err, The Fool in King Lear…

Maybe you’re on to something, none of them are funny either!
… And had licence to say those things that could not be spoken by others, Fools frequently caused offence by using bawdy language to undermine pomposity…

But they weren’t just repeating the word “fuck” in the hope of getting a giggle, were they?
… and to challenge the powerful. Such traits may all be identified in the work of their modern-day successors, such as Chubby.

Challenging the powerful? Jokes about women being bad drivers challenge authority?
Well, my theory may not be perfect.

Your theory might not be sane. How do his piss-poor song and dance routines challenge the powerful?
“The Back Scuttle” could be seen as a commentary on… no, you’re right, it’s piss-poor. It’s fucking awful.

And I suppose the cunning plot in which Chubby is kidnapped by leather-clad feminists from the future who he “satisfies” with his enormous sexual prowess is actually a commentary on the…
Stop you’ve made your point!

So is there anything good about this movie?
The brief snippit of Gloria Gaynor’s I Will Survive” is a rare moment of quality in an otherwise endless sea of shite.

Thirty seconds of decent music, is that all?
Well, it’s only 75 minutes long.

Does UFO: The Movie hold a lesson for fandom?
We should learn that believing that what women really want is the leering, pawing attentions of a sweaty, unfunny fat bloke with awful dress sense probably isn’t funny anymore.

Tread carefully, for you tread on my dreams.
Wanker.