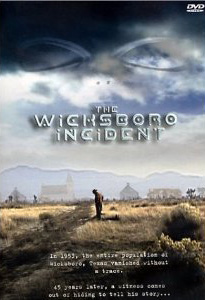 The Wicksboro Incident (2003) is “inspired” by The Blair Witch Project in much the same way that a drunk pissing his name in the snow is “inspired” by Picasso. And it is proof that low budgets don’t always mean smart film-making and better imagination. Watch it and see if you can guess which of the “actors” paid for the whole thing as a vanity project.

Incredible! How did you survive?
I went on the run, hiding for fifty years. I changed my – pause, looks down at script – name, kept on the move and told no one what I knew.

And now you’re telling the story to two imbecilic film students because?
Got – pause, looks down at script – bored, I guess.

This acting thing is tougher than it looks!
Sure – pause, looks down at script – is!

So, what are we going to do now?
Well, I’m going to lead you gormless idiots into deadly danger and you’re going to walk around carrying a video camera with endless batteries, endless film and no problem filming in the dark. It seems to be super-glued to your head.

That’s, like, so cool.
Not if you’ve seen The Blair Witch Project.

Can you tell us something about these aliens?
They all dress in black suits, which you think a cliché, but they just want you to think that so you won’t suspect that men in black are real. Psyche! They’re real cunning. And they are telepathic – but don’t use their powers to notice people pointing video cameras at them from a few feet away. They invented the Harrier jump jet and they chase you with helicopters of various types that might just have been flying around in the sky anyway. They don’t like to show off their advanced technology.

But you say they invented the jump jet?
Well you don’t think America is capable of creating such advanced technology do you?

But didn’t the British invent the Harrier?
British… aliens… is there really any difference?

And where will we find them?
In Texas. They’ve completely wiped out the population of a town called Wicksboro and flattened the whole site, except for its most obvious feature, a giant, shiny steel grain silo. Which is handy, otherwise we’d never find it .

I’m sure the last place the aliens will look for a renegade scientist and two documentary filmmakers making a film about alien conspiracies is a former research site and a place that they wiped from the map?
Mmm. Maybe we better think this through.

Too late! Do you think there’s any chance that the secret underground laboratory with the damning evidence of the truth about the conspiracy might have survived?
Not unless the aliens (or the script) are really stupid… On second thoughts, yes, yes I do.

If we get in trouble, do you think I should run for my life, staying away from authority and keeping out of sight or should I arrange to meet with a government agent who lied though his teeth to me at the start of the film? You really aren’t very bright.

Do you think I’ll die?
I think you’ll wish you had after 80 minutes of this hopeless drivel.