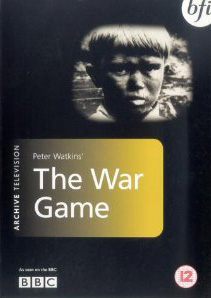 If the bomb had dropped in the early 1960s the English middle class would have been thoroughly inconvenienced — getting a decent cup of tea was going to be bloody hard if all the best china had been smashed for a start.

So what are we talking about this time?
The War Game.

Ah! I loved that film, didn’t you?
I’m surprised you enjoyed it. I wouldn’t have thought it was your sort of thing.

What? Matthew Broderick. Ally Sheedy. Tic tac toe. What’s not to like?
No you idiot, that’s Wargames. This is The War Game, the grim British docudrama about the aftermath of a nuclear war. It caused a huge controversy and the BBC shelved it.

Shocking. And what, exactly would be the aftermath of a nuclear war?
Millions of people would die. Some curtains would catch fi re. A cup would fall off a dresser. People would be very miserable.

Presumably because they really fancied a cup of tea and couldn’t have one, what with the cup being broken and everything? You know what the British are like when they can’t get a cup of tea.
There is something very British and middle class about director Watkins’ view of the apocalypse. There are going to be food riots but people will still be wearing neat suits and sensible coats. Their faces have got a bit dirty though, so things must be bad. And they will still take the time to make placards and write cutting, middle class slogans.

But it is horrible, isn’t it? Everyone says The War Game is terribly harrowing.
Sometimes. It isn’t like I’d want to disagree with the idea that nuclear war might probably be a bad idea. And there are moments when it is genuinely affecting. The sight of the mother and father crouched under a table hugging their children while their world shakes (or rather the director gives the cameraman a jolly good wobble) works surprisingly well. But sometimes it totters over into the melodramatic.

Such as?
Well, there are some real Star Trek moments when they try to portray a firestorm and have people jumping about pretending to being blown by one hundred mile an hour winds. No amount of fast cutting can hide the fact that they look a bit silly.

Oh dear.
And the food riot…

You’ve mentioned that.
I know, but it looks more like the first day of a House of Fraser sale than a riot.

The middle class can be pretty mean when they simply have to have that fondue set.
And sometimes I found myself objecting to the way the film attempts to manipulate the viewer. I didn’t like the way the film presents speculation as fact and uses fake vox pops to make a point. I know Watkins felt that a polemical film was justified given what he saw as the conspiracy of silence about the real impact of nuclear war, but sometimes even I felt this film was taking liberties.

So, the message we should take from The War Game is?
That nuclear war is a very bad thing.

Shall we play a game?
Tic tac toe?