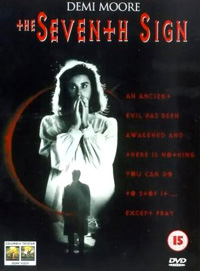 1988’s The Seventh Sign is a film in the tradition of Rosemary’s Baby or The Omen, but, y’know, rubbish. No one who acted in this film has been heard of since 1995. Is it cursed?

So, what’s the film this time?
Are you saved?

What?
Have you found your way to the Word of the Lord?

Errr…
Don’t you know that all the signs are being fulfilled? The end of the world is coming.

You’re talking about the film, aren’t you?
Either that or I’m writing biblical slash fiction again. Demi Moore is pregnant, the seas are boiling, the deserts are freezing, the rivers are turning to blood. Jurgen Prochnow is Jesus (though this time he’s disguised as a German tough guy called David), and Peter Friedman is The Wandering Jew, pretending to be a catholic priest who is determined to hurry along apocalypse so he can stop wandering the Earth for eternity and wander somewhere else.

So what’s going on?
Well, Michael Biehn enters and spends some time looking confused, but he might be acting. (Demi: “How was your day dear?” Michael: “Pff! The Supreme Court rejected my appeal. Again!””) Michael is the lawyer representing a very short person on death row for setting fire to his parents. The funny thing is, the short person wants to die.

I’ve never even heard of the “last martyr.”
Well, if you spent less time watching crappy religious-themed movies and more time reading the Good Book – or any book – you wouldn’t be the ignorant wretch you are. Anyway, when the last martyr is sacrificed, Armageddon can properly kick off.

Wait a minute, the short-arsed killer is a holy martyr? But didn’t he murder his parents, isn’t there something in the bible about that being a bad thing?
I think such an action contravenes both the fourth commandment (or fifth if you’re not a Roman Catholic or a Lutheran) and the fifth (or sixth – nothing’s simple when it comes to religion, is it?). Luckily, for the midget murderer his mummy and daddy were also brother and sister, and according to Leviticus, that means you can to chargrill them to a crispy finish without compunction (18:6-30).

Does Leviticus have any other good advice?
God loves salt. He’s very specific about it. Thou shalt not forget to salt my meaty sacrifices! Do not forget the salt. Put plenty of salt on my meat (2:13). But hold the yeasty bread and honey (2:10).

And this is the book that’s providing the justification for a guy to murder his parents?
I didn’t write this lousy script (or the Bible – I like yeasty bread and honey). And anyway, Leviticus is full of good excuses for killing people. Homosexuals (20:9), disobedient children (21:18-21) and blasphemers (24:16) are all fair game. It’s also the bit that says you can’t eat bats because they’re birds (11:19), four legged insects (11:22-23) and, of course, cud-chewing hares (11:6 – not sure where that leaves cows). It’s a good thing nobody takes this stuff seriously anymore!

So then what happens?
God may be omniscient, omnipotent, omnipresent and probably omnivorous…

Nope, we’ve established that, no honey or yeasty bread.
Oh, right. Well He may be those other omni-things, but His lawyer is rubbish, there’s a get-out clause.

I can hear him now… “Let there be light. Check! Create the world. Check! Creatures? Check! Man? Check! Set in train events that will lead to the destruction of humanity, war in heaven and my everlastng reign? Check! All done! What have I missed? Oh, phone lawyer? Oops!”
You know God is looking over your shoulder as you type this.

I know, I’m adding it to the pile of Catholic guilt I keep under the bed. My nose would touch the ceiling, if my belly didn’t get in the way. So, what’s this get out clause?
Stop the execution and you stop the Judgment.

And what cunning legal argument does Demi use to save the day? Do biblical scholars convince the boy that God just really wants us to be nice to each other and so he should give up this “I’m the last martyr” nonsense and go out and help old ladies across the street? Does she get him to plead insanity? Offer to walk the judge’s poodles for, like, a really long time?
Don’t be silly! She just rushes into the execution chamber and shouts: “Stop!”

That old one? Surely his lawyer should have thought of that months ago.
Well, like I said, Michael Biehn was looking confused for a lot of this movie.

Then what?
The satanic priest shoots him anyway.

We’re all doomed!
Luckily God changes His mind because Demi sacrifices herself.

I think it was His dad. And you just broke commandment number 2 (or 3) – you’re going to hell!
If there is one.

(This is a longer version of the piece originally
published in Matrix 169, Sept/Oct 2004)