THE NIGHT CALLER FROM OUTER SPACE 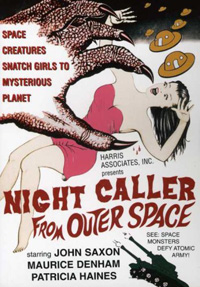 What is that terrible noise?
The niiiiight callerrrr
Is a mystifying maze
Or a dangerous, intoxicating game…

Stop! Stop! My ears are bleeding!
The niiiiight callerrrrr
Must be played with many skills.
As the stakes are met for Britain’s secret group…

What are you doing?
Leave me alone, I’m crooning!

I thought you were throttling a moose.
Philistine, you can’t appreciate a great theme song when you hear one.

So is this film is about a maze?
No. Not as such.

Is there a maze in it at all?
Not that I noticed.

But there is a dangerous, intoxicating game?
Nope.

Umm… is there a secret British group?
Hmm, let me think… No.

Do you think whoever wrote the song –
Albert Hague.

Right. Do you think he actually saw the film, or read the script?
It would appear not.

No maze! No game! What is it all about?
An egg falls to Earth, scientists pick it up, an alien appears, woman sees alien, woman faints, the alien hides, no one believes the woman, men see alien, everyone believes men.

Do we learn anything about British scientists in the 1950s?
They weren’t employing pretty secretaries for their typing. There is a display of two-fingered keyboard mangling that would reduce Mavis Beacon to tears. And it wasn’t for their brains, because frankly I don’t think they listen to a word the women say.

And what do we learn about the alien?
That he has an eye for a nice car. After arriving from Ganymede in a glowing egg, he pinches an E-Type Jag and bombs down the motorway like a neophyte Kray.

How does he kidnap the girls?
They are dragged through mysterious 3D photographs to distant Ganymede.

How does it end?
The alien kills lots of people then delivers a standard Cold War alien address to mankind (Version 2.1) – about mankind’s need to learn to live peacefully with others (which coming from a homicidal maniac, seems a bit cheeky) – then he reveals that he is half handsome, half cheap special effect and disappears in a ball of flame.

Typical. And the moral?
“Lets hope they find a cure, and tell us.”

How does that song go again?
The niiiight callerrrrr
Casts a hypnotising spell,
Fools who try to fight it, never live to tell.
Never live to te-eeeellllll!

One Response to THE NIGHT CALLER FROM OUTER SPACE