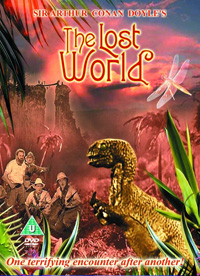 Adventure! Mysterious lands! Dinosaurs! Huge, impressive beards! The Lost World might be nearly 80 years old, but this movie has it all. It even has Arthur Conan Doyle. And he’s typing!

Wasn’t The Lost World was called the “most marvellous film ever exhibited” when it was released?
Well, it has got Willis O’Brien’s stop-motion dinosaurs and a rip-roaring plot from Arthur Conan Doyle and Wallace Beery’s beard. What’s not to love?

Wallace Beery’s beard?
Wallace Beery plays Professor Challenger and his beard is the most frightening thing in the movie. It’s an enormous bushy growth that dominates every scene. I was at once terrified and yet strangely drawn to it.

Forget the beard!
If only I could…

What about the film? It starts with a shot of Arthur Conan Doyle.
Hollywood doesn’t give writers much respect these days – unless they’re called Tom Clancy – but yes the creator of Sherlock and believer in fairies opens this film. In the original version, now lost, he was shown typing the first lines of the novel but in this restored version he is shown sitting in his garden.

So this will be a faithful representation of his book then?
Don’t be ridiculous! Hollywood was Hollywood even then. They changed the ending to have a giant dinosaur rampaging through London and they added a love story for the dashing young hero and heroine.

Nothing changes. But what makes The Lost World special?
Every monster movie you’ve ever seen owes something to The Lost World. Willis O’Brien’s monsters inspired a generation of film-makers and are even more amazing when you realise that he worked alone. His dinosaurs even breathe and slobber. The shining eyes of the allosaur as it emerges from the jungle is a great shot. Wallace Beery dominates as the blustering Professor and Lewis Stone is good as the refined gentleman, Sir John Roxton.

Anything good on the DVD?
The least informative DVD commentary ever. There is an amazing story to tell about the restoration of this version of the film. For seventy years most of The Lost World was considered, well, lost. But careful research has put back together 92 minutes of the 104 minute original. Yet the commentary is by someone whose only interest is in the book and who doesn’t speak at all for long periods of time. Where are the film historians and restorers and the special effects experts? Twelve minutes of special effects out-takes are quite interesting though and there are two musical scores – neither of which did much for me.

Any surprises?
Realising that, in the days before David Attenborough, the shots of leopards, crocodiles, sloths and spectacle bears would have been almost as exotic to viewers as O’Brien’s dinosaurs. And that black and white films weren’t shown in black and white but tinted blue for night, yellow for day and with different shades for sunlight and internal lighting. It adds a surprising amount to the film.

So is The Lost World marvellous?
It’s pretty much essential for anyone interested in monster movies – after all this is the film that inspired King Kong. Shame about that commentary though.