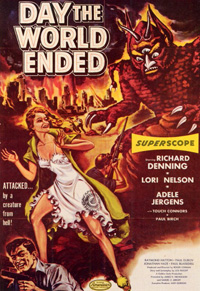 Surely nothing could be worse than waking up to discover that nuclear war has brought an end to civilisation as we know it? In Day the World Ended Samuel Z Arkoff and Roger Corman set out to prove that nuclear armageddon is just the amuse bouche in the menu of terror. Quake before horribly deformed monsters! Shudder at the creeping radiation! Weep at the terrible acting!

The names of Samuel Z Arkoff and Roger Corman together on a film – a guarantee of quality entertainment for all the family!
Well, if by quality entertainment you mean terrible stories, bad acting and the worst special effects in the history of movie–making, then Day the World Ended delivers on every front. Plus it has a fantastic selection of warbling theremin music to let you know when something “special” is going to happen.

So, briefly please, what’s the plot?
Seven stereotypes survive a nuclear war because they happen to be surrounded by hills containing lead ore. Gradually they kill each other or fall victim to a radiation-mutated monster until, in the end, only the hero and heroine remain to repopulate the earth.

Does Day the World Ended teach us any interesting science?
Oh yes. lots. Radiation, for example, looks a lot like the smoke from a smoke machine.

Fascinating. Anything else?
Well radiation mutates all living creatures in the same way. They grow wobbly horns, long fangs, a third eye and develop an unhealthy taste for flesh.

Extraordinary –
Wait, I forgot something. They also develop steel claws and bullet–proof skin.

Why on earth would that happen?
Nature’s way of coping with radiation, apparently. The mutant monster also develops an irresistible urge to run off with the prettiest blonde in the movie.

Any other effects of radiation exposure?
Well… the safest place to hide from a radiation-created monstrosity would be in a bath or shower because God’s good, clean natural rainwater is sure to destroy these wicked man–made beasts. Manchester is safe.

Anything good on the DVD?
Nine increasingly awful trailers for other Arkoff productions and a mildly entertaining Guardian/BFI interview/monologue by the man himself in which he reveals that the monster in Day the World Ended was originally meant to be played by a six foot tall, athletic actor. However, they got the suit made on the cheap by Paul Blaisdell, an out of work actor who made it to fit himself. Unfortunately he was only five foot three inches tall and weighed forty pounds less than Louise Maddison, the actress he was supposed to sweep off her feet and carry through the forest. He couldn’t lift her on his own. They had to have people off-screen holding the girl up when the monster was supposed to be carrying her.

Is there any reason why I should buy this film?
The theremin music is cool.

Wait a minute, this is The Day the World Ended.
That’s what they’d like you to think! Arkoff produced a 2001 TV movie “remake” that used the same name but an entirely different plot – one in which the world doesn’t end and they added a definite article to the title.