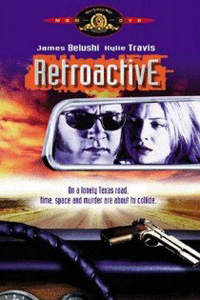 Retroactive? Great name for a time travel film.
Yeah, it’s like Principal Skinner said in that episode of The Simpsons where he gets together with Homer, Barney and Moe to form Bee Sharps, a Beatlesishbarbershop quartet. “We need a name that’s witty at first, but that seems less funny each time you hear it.”

I have no idea what you’re talking about.
Nothing new there.

So what happens?
Well there’s Karen (Kylie Travis), she is a police psychologist who has just got a load of people killed in a hostage situation gone terribly wrong –

Oh! I get it. She travels back and saves the day?
The thought never crosses her mind. She’s driving through the desert when her car breaks down, so she hitches a ride with two strangers.

Now I’ve got it. She’s a hitchhiker, so she must be a maniac. SHE killed the hostages and she’ll gradually kill the rest of the cast in unlikely but entertaining ways.
Not even close. Frank, (James Belushi) the driver of the car who picks Karen up turns out to be a psycho who kills lots of people, including his girlfriend Rayanne (Shannon Whirry).

You’ve ruined the ending, and what happened to the time travel?
I’ve only just started. Karen escapes from Frank and runs off into the desert and she finds a secret government facility where they are testing a time travel device. Not that this hugely important device is guarded or anything, there’s just nerdy Brian (Frank Whaley).

That is lucky. A time machine, in the middle of nowhere, with no guards? How lucky! What are the chances of that? She’s just so lucky!
Yes, it was very lucky. Sarcasm is a particularly low form of wit, you know.

So then what?
She goes back in time again.

And? Don’t think I’m guessing again – I’m not just here for you to make fun of.
Actually I think you’ll find that’s exactly what your here for, read your contract.

I have a contract?
No.

Just tell us what happens in the film.
What happens is that things get even worse. So she goes back in time again and again.

Cool. She must come up with a great trick to get herself out of this mess. What does she do?
Nothing.

Sorry?
She does nothing.

That sounds a bit dull.
Well, she goes back in time and smokes a cigarette and watches Frank drive past. It is incredibly dull. Infuriatingly dull! So dull that even your ideas sound better than the one the makers of Retroactive came up with. And you’re an idiot.

How do you know that?
Because we’re the same person, remember. We only pretend to be separate for the sake of this column.

That’s what they think.
Shut up.