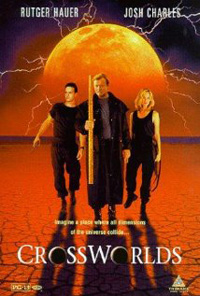 Crossworlds is the story of a young man who discovers that his father came from another dimension and that he is the key to mysterious crystal that could end a war. It may well be the most exciting science fiction film ever made. I mean it might be. I couldn’t actually tell you.

Hello! Are you there?
…zzzzzzzzz…

The column. We have to write the column.
Oh yeah.

So, did you watch it?
Watch what?

The film. Crossworlds. Did you watch it?
Yes. Well, I mean, I tried to watch it.

You tried to watch it?
I saw the first half an hour three times, but then I fell asleep.

You lazy sod! Go back and watch the film.
Only if you come with me, maybe if we try and watch it together we’ll be able to stay awake.

He was in Dead Poets Society!
– is at a party. And there’s Jack Black –

He was in High Fidelity!
Are you going to do that all the way through?

Just because he doesn’t have a girlfriend doesn’t make him a loser.
Have you got a girlfriend?

She was in… No, wait, never heard of her.
No, me either. She does, however, have long legs and a short skirt. She’s interested in Josh but just when he thinks he’s got lucky she disappears and Josh goes home alone and frustrated.

I know that feeling.
Of course you do. Loser.

People are shooting. Where did they come from?
Dunno. So Andrea does the “come with me if you want to live” speech from Terminator and takes Josh to meet Rutger Hauer.

He was in…
Blade Runner, The Hitcher, some Dutch films, more direct-to-video stinkers than anyone except Dolph Lundgren, and that stupid one where he played the blind, swordfighting, Vietnam vet.

Blind Rage. Please, leave this to a professional, I’ve had years of training in the art of seamlessly slipping film titles into magazine columns.
Have you ever thought of getting out more? It might make you less of a loser. The film is starting properly now. There’s the bad guy, English character actor Stuart Wilson –

He was the bad guy in Lethal Weapon 3.
Really? I didn’t see that one. So the bad guy wants the necklace Josh got from his mysteriously dead dad, and he’s really powerful in a low– budget Emperor from Star Wars kind of way and Rutger is his old enemy and they fight and…