BACK TO THE VORTEX 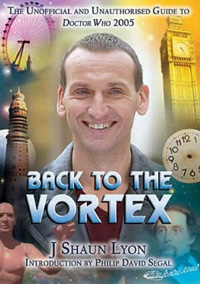 Facts are good! Facts are great! No, facts are fantastic! Aren’t they? Facts are what fans really want. With facts you can reduce everything down into neat categories that can be wrapped in laminated plastic and store for eternity. Take the thing you love, eviscerate it and pin it down so that it can never move and never change. You can’t do any of that without some good facts.

That’s why so many fans react so badly to changes in “their” worlds. It’s why the people who write Star Trek stories have to have manuals hundreds of pages thick on how warp engines work, so that they don’t contradict something that Kirk said a hundred years ago about the power output of dilithium crystals in an anti-matter matrix. It is why so much science fiction simply retreads what has gone before rather than risk upsetting the expectations of fans who know how these things work and don’t want anyone challenging their preconceptions. They’ve got the facts and they don’t want anyone changing them, understand?

Of course it isn’t just in science fiction that breeds this kind of interest in categorising, enumerating and delineating the world – there are plenty of fans of sport, music, soap operas and, for all I know, knitting, who share precisely these characteristics.

Back to the Vortex is a perfect example of a book designed to serve a market who care how many times someone says the word “fantastic” in the new series of Doctor Who or the number of people who die in each episode. As such the author, J Shaun Lyon, should be congratulated. I can’t imagine a more comprehensive volume. But it is not without its flaws.

The first half of Back to the Vortex is devoted to the story of Doctor Who’s return to television screens. It explores in impressive detail the rumours that emerged during the planning and production of the new series. Unfortunately Back to the Vortex does not offer any unique insights – there is little, if any, original research on display here. This is disappointing. Some basic journalistic techniques could have helped cast light on some of the incidents behind the stories. Instead, the first half of Back to the Vortex consists of the regurgitation of material from a variety of previously published (print, television, Internet) sources. No fair judge could criticise the scale of the research or the obvious devotion with which Lyon approaches his task, but the result still feels shallow – like an immense Whovian gossip column. A fact not helped by Lyon’s own sometimes breathless writing style.

The second half of Back to the Vortex features a chapter on each episode of the new series. It is in these episode guides that the fan facts machine really takes off, with Lyon breaking down elements such as the aforementioned “fantastic” count and “Bad Wolf” references under recurring subheadings in each chapter. There are brief attempts at a more serious critique of each episode under the section “Theme Analysis” but these are so brief and so poorly defined that they add little to our understanding of the revitalised Doctor. Then each episode is reviewed by a number of fans and finally by Lyon himself.

As an extended episode guide and gossipy look at the production of the new Doctor Who, Back to the Vortex is perfectly acceptable – even though the writing is sometimes awkward and the text is crammed pretty tightly into the four-hundred-odd pages, making for a rather uncomfortable read, it will find a welcome place on many fan’s shelves next to the new DVD boxset.

It isn’t, however, as publishers Telos claim on the back cover an “incredible critical analysis” of the new Doctor Who. Indeed it offers almost no critical analysis of the Doctor’s reincarnation at all. Despite the fact that Back to the Vortex is a hefty book with tightly packed text it remains remarkably shallow. There is no attempt to explore, for example, the differences between the modern Who and his earlier incarnations, or to look at sexuality in the new series (this Doctor is, for example, plainly in love with his assistant in a way not previously seen), or to consider the themes of violence, loneliness and loss that seem to be at the heart of writer/director Davies’s vision of this Doctor.

Back to the Vortex is a potentially useful piece of reportage (though its usefulness is significantly diminished by the unforgivable absence of an index) but it is in no sense a serious attempt at critical analysis of the new Who. This is a book for fans – and that’s okay – but anyone looking for something more than this must look elsewhere.