WORKING FOR THE DEVIL 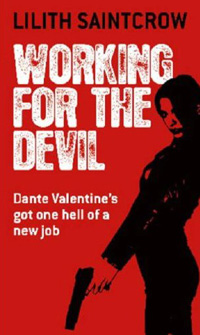 It’s only fair to Lilith Saintcrow that I begin this review by admitting that I fall well outside the target demographic for Working for the Devil. This novel’s tale of spunky women battling/shagging demons is targeted precisely at a post-Buffy market from which I am excluded by gender, disposition and, probably, age. Even allowing for that, however, this is not a good book.

In Working for the Devil the protagonist, Dante, is a necromancer who deals mainly in legal negotiations but who has an unlikely sideline in bounty hunting and private investigation. Dante lives in a world where magic and high-tech weaponry co-exist but, for some reason, people still carry swords (I say: hokey religions and ancient weapons will never match a good blaster, but I’m old-fashioned). Dante is summoned to hell by Lucifer and given the task of hunting down a psychopathic-mass-murderer/escaped-from-hell-demon called Santino and (sometimes) Vardimal who, it transpires, killed Dante’s former lover and permanently scarred Dante. Lucifer gives Dante a demon sidekick and she teams up with a ragbag of associates – including her former lover, Jace – on a tale of entirely predictable love, adventure and stuff.

Working for the Devil’s greatest weakness is the quality of Ms Saintcrow’s writing. At best this book plods, at worst it clots and clogs and drags the reader down into a mire of repetition and over-elucidation that stretched my patience beyond endurance.

Take, for example, Dante’s asthma. Our heroine must have some sort of respiratory disorder, because whenever anything happens in the novel everything stops so Dante can tell herself to “breathe, just breathe.” And, when she’s not gasping for breath, she’s fighting off inappropriate fits of giggles. Then there’s the demon’s “laser-green eyes” – a phrase that is repeated again and again and again. There are sunrises that happen more than once in three pages, people do things twice, everyone appears to be constantly stroking their swords and people do things twice. It’s all very sloppy and becomes increasingly annoying as the novel unfolds.

Worse, though, is the banality of the prose. Hell is a badly decorated hall with obsidian floors and red walls. Evil men cackle maniacally and the devil is reduced to a humdrum, third-rate gangster. Nowhere in this book is Saintcrow able to raise her game and convey any sense of the extraordinary – this is mundane fiction of the worst sort.

And finally there is the crude characterisation. Dante has had it tough. How do we know this? Because every element on the plot is intimately tied to Dante’s ludicrously tortured personal history.

Born with a genetic twist that makes her part of a hated minority she was sold into slavery by her parents. In a terrifying orphanage she was beaten and tortured. She befriended one teacher, who was murdered in front of her by drug addicts. After graduating as a necromancy she he is tortured by a gang of rogue magicians but saved by Doreen, a prostitute (heart of gold, obviously) who Dante then rescues and they fall in love. Doreen is slain by a homicidal maniac. Dante meets Jace – who doesn’t tell her he’s actually the son of a Mob boss and eventually disappears without explanation. Every new development of the plot brings a pause so that Dante can reflect on the deeply personal resonance the new event has on some dreadful part of her back story.

It is one thing to give a hero a tortured secret that haunts them or drives them on, it is quite another to have the protagonist of a novel incapable of connecting emotionally with the world without some overwrought drama in their past. Rather than adding to the relationship between the reader and the protagonist, Dante’s Pythonesque history (missing only life down the pits and eating gravel) accelerates across the line of believability and keeps going to the point where the reader can’t help but feel demeaned by these lazy attempts at emotional manipulation.

In this book’s “Acknowledgements” Ms Saintcrow thanks those who “read her work and call it bad” because we inspire her “to keep going just to prove you wrong”. Good for her. And good luck with that. I fear she has a long way to go.