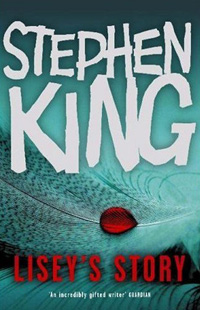 Stephen King stopped being a “writer” decades ago. These days Stephen King is a giant, steamrollering, cash-making machine that trawls across the landscape of our ecologically over-burdened planet raking off a vast slice of humanity’s combined wealth before one day – just as the final sliver of rainforest is gasps its last – Stephen King will unfurl its true self before us and ascend back to the stars whence it came leaving behind nothing but a fading maniacal cackle.

Which is to say: Stephen King is review-proof and faced with his awesome power many reviewers have buckled and decided to side with the alien invader – these quislings have infiltrated many otherwise reliable journals and claim that King is a master of storytelling and language whose novels transcend their roots in horror and belong in the literary canon.

Lisey is the widow of the late, fantastically-talented, charismatic, endearingly-fragile and, of course, much-lamented author Scott Landon. Scott died two years ago but Lisey is only now coming to terms with her loss and beginning to think of starting life afresh. Suddenly, however, strange things begin to happen. Her sister slips into a coma and starts speaking to Lisey in the voice of Scott. She finds herself threatened by a psychopath. Strange memories begin to surface of a place called Boo’ya Moon, the truth behind Scott’s childhood and the monsters that haunted him.

The plot, though, doesn’t much interest King. It is moved on by a series of “bools” – clues left for Lisey by her dead husband – and improbable coincidences. Despite the formulaic attentions of the book’s psychopath, any sense of tension in the story is built almost entirely on cheap tricks – convenient amnesia imposed on the characters and evasion on behalf of the author – making Lisey’s Story an infuriating read.

King’s focus is not, then, on an intricately constructed plot but on the relationship between Scott and Lisey and the nature of a long marriage. But it is precisely at this point that the novel feels the weakest. Scott is, frankly, a smart-aleck prick who prances around the world dispensing homespun (half-baked) wisdom while dragging his wife – unacknowledged, unheralded – along as a crutch for his emotional inadequacies. But Lisey is worse, a simpleton or a coward, she doesn’t just suffer Scott’s grandiosity, she revels in her place three steps behind her husband lacking not just personal ambition but any shred of personal dignity.

And then there’s the writing. Lisey’s Story is a fireworks display of writerly tricks –  chapters, viewpoints, time periods all change in mid-sentence – but none are so painfully irritating as the private language between Scott and Lisey. From “puffickly hoo-yuge” to “Manda bunny” being trapped with these two is like being stuck in a lift with one of those couples who wear matching cagoules, carry around Thermos flasks of weak tea and pictures of their cats and who, for years after a single chance meeting in Corfu, send you Christmas cards containing threats of impending visits. They are possessed of both terrifying inanity and mind-boggling insularity.

With Lisey’s Story Stephen King is revealed as an author who both believes his own hype and is unable to live up to it. This book is a misconceived attempt to tie his undisputed talent for telling an engaging story to a form that allows him to stake a claim to greater literary pretensions. But King, whatever his ability as a shifter of books and whatever the claims of fans and critics, is nowhere near as adept at offering emotional or psychological insight as he is at dispensing thrills. Lisey’s Story fails to offer the excitement of King’s best work but lacks the sophistication of character and theme of a truly literary novel.