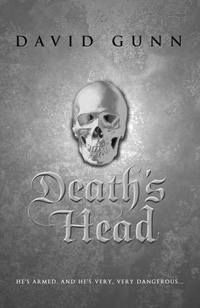 David Gunn’s debut novel, Death’s Head, isn’t going to win prizes for originality. Its galaxy-spanning setting, cast of stock characters, and plot that has a super-powered hero planet-hopping to save damsels in distress and prop up tottering empires, rehashes every trope in the military sf armoury.

Too much of Death’s Head feels overly familiar, especially the jokes. The eponymous elite Death’s Head regiment, in their sharp black uniforms and skull insignias, feel like an extended riff on that Mitchell and Webb sketch where two SS Officer examine their uniforms and wonder: “Are we the bad guys?” Then there’s the spaceship so utterly black that you can’t read the lettering on the controls – Douglas Adams would be proud. There’s even a talking gun with a wise-cracking artificial intelligence that wouldn’t be out of place in early Jon Courtenay Grimwood…

Not that the reader has time to worry about any of that. Death’s Head moves so fast and peppers its target with so many shots that some readers won’t mind that the vast majority of them scatter wide of the mark. Shit happens. Protagonist, ex-legionnaire and general tough-guy Sven Tveskoeg is dragged from a sweat box and sentenced to death, gets whipped beyond human endurance, watches his fellow legionnaires get massacred, is adopted by the fierce alien Ferox, discovers he (uniquely) can communicate with them, meets a human girl, shags her, eats her (for dinner), watches the Ferox get slaughtered, is “rescued” by elite Death’s Head troops and gets sentenced to death, again. All in the first fifty pages!

Death’s Head continues at a similar pace but it all too soon becomes wearing. Places and events flash by so quickly that Death’s Head feels more like an outline for a larger work than a finished novel. There are moments when Gunn’s writing seems to fail him. He invests little energy in describing this universe at the best of times but there’s a particular failure aboard the Death’s Head’s all black mothership (yes, he really calls it a mothership) when the word obsidian gets used a lot without real purpose.

Sven is all-but-indestructible and his hard-luck background, hard-bitten attitude and devotion to his squad draw on the blandest of mil-sf stereotypes. The “adventure” is divided up into three, barely-linked, segments spread across numerous planets, with various people passing through Sven’s life in a rush of names but with precious little characterisation. It’s a fractured structure that sacrifices both tension and credulity and it is made worse by a denouement that teeters on the brink of deus ex machina.

There are other problems. To call the book’s attitude to women Neanderthal would be a disservice to our low-browed ancestors. There really is a prostitute with a heart of gold who is amazed by the size of Sven’s knob (p96) and pretty young cousins (they could have been twins – p129) who are only too happy leap into bed with him. Yes, there are tough women soldiers, but they’re defined by how much Sven wants to shag them.

Violence is a given in this type of mil-sf, but Death’s Head’s detailed description of each act of murder or torture stand out because they’re the only time Gunn’s writing seems to come to life, the only time he really appears interested in language. Sadly, even here, the repetitive descriptions of bone-crunching and blood-letting soon lose their shock value.

As a first novel Death’s Head probably deserves some slack but it is too blunt to succeed as a comedy while as an adventure it lacks both compelling characters and narrative cohesion. I was glad to finish it and the promise of sequels leaves me cold.

One Response to DEATH’S HEAD