LAND OF THE HEADLESS 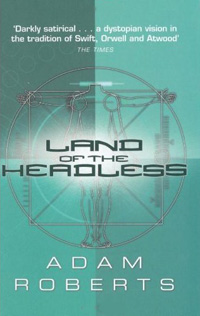 Do you want to know how smart Adam Roberts is? His latest novel, Land of the Headless takes its name from a story you don’t know by a writer you’ve never heard of, whose lasting claim to a footnote in history is mostly that he went to school with Pushkin, someone you’ve probably never read. Not that your ignorance, or mine, matters. Because even if you knew that The Land of the Headless was an early dystopia written by Wilhelm Kuchelbecker, romantic, Decembrist-revolutionary, failed assassin and buddy of Pushkin, I’m not sure it helps cast any light on this story.

Roberts, genre historian and professor of literature with an interest in the nineteenth century, plainly intends some of his study of two-hundred-year-old books to show beneath the sf veneer of his new novel. There are echoes of earlier literary forms throughout the book. There is the stiff formality of his narrator, who addresses the reader directly as though writing a letter – giving the story the flavour of an epistolary novel. Then there is the heavy reliance on misunderstanding and sudden revelation – moments that might not have been out of place in Dickens or Austen, had their novels featured headless protagonists enlisted into brainless armies on alien planets. There’s even a section that begins with a close paraphrase of Jane Austen’s most famous punchline, “Reader, I married him”.

Other reviewers, more learned than I, have suggested Proust as an influence for Land of the Headless but I thought I got a whiff of Thomas Hardy in the semi-tragic self-flagellation of a protagonist who allows an early lapse of judgment to haunt him until a brief period of hard won happiness is torn apart by a nexus of chance meetings and unlikely revelations.

Adam Roberts is amongst the cleverest of current British sf novelists. He is perhaps the most technically ambitious and certainly the most aware of the context in which he writes. But there is something missing. His words lack penetrating power. He peppers his targets with sharp phrases but none have sufficient force to bring down the great beasts that he has in his sights.

Roberts has none of the bitter, venomous precision of Swift and none of the righteous fury of Orwell. Both these writers possess an almost fearsome clarity in their writing. Their targets were tracked with laser-like accuracy and every volley of sentences battered home their larger points. This precision is entirely absent from this Roberts’ novel. Facing the massing forces of religiously-inspired intolerance, I would as happily be armed with a wet lettuce leaf as a copy of Land of the Headless.

And it’s not because Roberts lacks the capability as a writer or even that this book is particularly badly written – it’s not, there’s much to enjoy. In Roberts’ other work he has demonstrated that he can write passages of real power. Here he, very successfully, creates a pompous, self-delusional protagonist that every reader would happily throttle, if he hadn’t had his neck chopped off in chapter one. True the narrator’s constant whining won’t ingratiate Land of the Headless to the casual reader, but Jon Cavala’s universe, dominated by a theocracy that reserves the same punishment for sex outside marriage as it does for murder, is engrossing. As a simple tale of war, love, loss and a kind of redemption, Land of the Headless works well enough.

But, any novel that persistently claims to be a “simple tale” clearly wants to be much more than that. Roberts isn’t spooling out all these words just to distract us with a bit of bonce-free Mills & Booning.

Land of the Headless has a memorably absurd discussion about “God particles” making a spaceship travel faster than light and an intriguing but unsatisfactorily explored moment when Cavala mistakes a computer virus for heaven. Throughout the novel Panglossian characters, bouyed by faith, display a passive acceptance of dreadful events and fierce cruelty and this is obviously meant to prick the reader’s conscience. But Roberts’s critique of religion is too shallow to support the broader edifice of his story. The splodged together hodge-podge of Islam and Christianity that he welds onto the world he creates is too vague to be convincing and there’s no sense that Roberts has a genuinely specific axe to grind with the religious tyranny in which he places his characters.

There’s no indication of how this planet-wide (indeed galaxy-wide) religious tyranny has been enforced. People wander around from place to place without surveillance or apparent hindrance. There are police, but they are easily avoided. The clergy make no appearance at all. Military authority is arbitrary, and stupid to the point of farce, but there’s no sense of it extending beyond the barracks. There’s no indication of fear or oppression in people’s everyday lives and no sign of how a rigid order is enforced, though the characters seem to take for granted that they have no way of offering resistance.

To return, briefly, to the comparison with Swift or Orwell, both of these men saw great wrongs in the social order of their times. Their rage at these wrongs forced them to write. Their books were born of consuming anger and were launched against powerful targets.

By contrast, in Land of the Headless, there’s the sense that Roberts’ story has been dragged from a rather comfortable dislike of some rather blurred vision of religious practice and belief. There’s not much sense of anything being really at stake. The satire feels synthetic. The motivation seems to stem from an intellectual exercise rather than out of a deeply emotional response.

Because Roberts can’t construct a plausibly fierce orthodoxy or a realistic government capable of imposing a rigid order on the most intimate parts of human life, nothing else that flows from his story has real bite. Given the evidence on display, and apart from the apparently random acts of beheading (which are never satisfactorily explored), Cavala and his companions in Land of the Headless might as well be trapped in the cloying bosom of an over-keen Vicar of Dibley as beneath the boot of the ravening hordes of modern fundamentalism.

Effective satire requires not just intellect but focus and fury, Land of the Headless lacks either. It wastes its energy on an unsatisfactorily rambling narrative and, if Roberts really is angry about religion, he keeps his emotions too tightly reined beneath stylistic tricks and his protagonists missing stiff-neck.