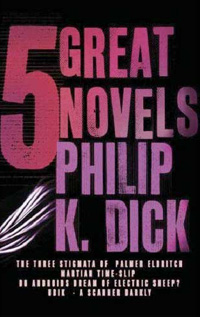 There’s something about being faced with a volume whose cover proclaims in large and luridly pink lettering that it contains 5 Great Novels by Philip K Dick – a book five centimetres thick (that’s two inches in old money), cumbersome and gaudy – that makes you wonder whether anyone in the publishing industry ever reads anything they put onto paper and, if they do, whether they ever feel the slightest hint of shame.

It’s not that the novels behind this garish covers aren’t good, but so much of the writing here deals with the issue of the commoditisation of human life and culture and the subsequent hollowing out of meaning that the presentation of these novels in this bumper “value for money” packaging, like so many toilet rolls or packets of cereal, might be the very definition of irony.

Inside are The Three Stigmata of Palmer Eldritch, Martian Time-Slip, Do Androids Dream of Electric Sheep, UBIK and A Scanner Darkly and it’s perfect for those who buy their books by the yard to fill shelf space. But, for practical reading purposes it’s unwieldy and I confess I dug out my old paperback copies of the novels to read on the train rather than lug this weighty tome around.

Ignoring the packaging, it is still hard to pick up a Philip K Dick story or novel without facing up to the baggage that now accompanies his work. There is Dick the Artist: his transformation from pulp hack to author of literary significance and his subsequent adoption as the acceptable face of sci-fi for those who normally frequent more rarefied literary environs. Then there’s Dick the Cultural Phenomenon: with ten Hollywood movies already released (plus adaptations of Radio Free Albemuth and King of the Elves in the works and a biopic, The Owl in Daylight, on the way) there are few other science fiction writers who have had such a profound influence on the popular imagination. Dick has become a brand as much as he is a writer.

It’s a commonplace but nonetheless accurate assertion that Dick is best described as a competent stylist. Even judged against the most pulpish of his contemporaries Dick’s prose hardly distinguishes itself. On occasion – especially when encompassing female characters – his writing can be downright clunky. It’s not how Dick said things that has caused his star to rise, but what he said that seems to have caught the zeitgeist.

Dicks once said his “grand theme” was:

“who is human and who only appears (masquerades) as human. Unless we can individually and collectively be certain of the answer to this question, we face what is, in my view, the most serious problem possible. Without answering it adequately, we cannot even be certain of our own selves, I cannot even know myself, let alone you”
(Collected Short Stories Vol. 3, 1987, p424).

Identity is the theme most often associated with Dick and it is, of course, evident in some form in all the novels in this collection. Barney Mayerson struggles to work out which thoughts are his own in The Three Stigmata…; Jack Bohlen scrabbles to hold on to the threads of reality in Martian Time-Slip; Deckard fights to tell android from human in Do Androids Dream…;  in UBIK reality literally falls apart around the cast of characters so that they can no longer be sure what to trust or what they have become; and in A Scanner Darkly Bob Arctor loses the battle to hold together his multi-stranded personality and is reduced to a blank slate.

Since, to an outsider, modern America can look obsessed with picking at the scabs of personal and collective psychoses, Dick’s fascination with what defines us seems a perfect match with that society’s obsessions. It clearly chimes in a culture (and perhaps specifically in a West-Coast subculture) that is deeply invested in masturbatory levels of self-analysis and “medicates” five million children every day with Ritalin.

But issues of identity are not the only recurring themes in these five novels.

Dick’s characters are almost universally miserable. There are no moments of unalloyed joy in any of these novels and even brief interludes of happiness are tainted with the knowledge that they are at best fleeting.

And the misery of Dick’s characters is compounded by their desperate but futile attempts to find some escape through the dubious pleasures of consumerism. In The Three Stigmata… the Martian settlers in their hovels buy Can-D and experience an ersatz, second-hand version of the American dream realised in the virtual, plastic world of PP Layouts. But the moments of escape no longer satisfy. The fake pleasures of the PP Layouts world are always undermined by the knowledge of what awaits back in their Martian hovels. In Martian Time-Slip all the illicit black-market goods and wealthy extravagance of life as a petty king cannot hold back Arnie Kott’s restless dissatisfaction. Ownership of an animal – as a status symbol, as a desirable object and as a confirmation of their connection with the “real world” – obsesses Rick Deckard (and all those around him) in Do Androids Dream… but the consummation of that desire leads only to guilt and further, deeper unhappiness. And, perhaps most painfully, the characters in A Scanner Darkly are burnt up and destroyed by their attempts to purchase an escape through drugs.

Whether through luck or a stroke of genius, the themes Dick seeded through his novels have become ever more relevant as time has passed.

As for the novels contained here, A Scanner Darkly and Do Androids Dream of Electric Sheep stand out as moments where Dick manages to combine both plot and thematic concern to deliver deeply satisfying novels. Martian Time-Slip has many interesting ideas and characters but the stylistic tic of repeating scenes from many different viewpoints slows the middle section fatally. The Three Stigmata of Palmer Eldritch aims exceptionally high, attempting to address the nature of reality and god, but it doesn’t quite deliver – getting bogged down in its own complexity and the shallowness of its central characters. UBIK does a better job of playing games with reality while maintaining a narrative drive but is, I think, let down by a ending that comes close to invoking deus ex machina.

All of these novels offer something – and at least three (A Scanner Darkly, Do Androids Dream of Electric Sheep and UBIK) should form part of any well read science fiction fan’s mental furniture. My selection of “great” Dick novels would have included The Man in the High Castle, Valis and, perhaps, Flow My Tears the Policeman Said.

Whether this volume is for you, however, probably depends on whether you can put up with the bulky and cumbersome format and the lurid pink lettering on the front. Most readers, I think, would be better served finding individual volumes of these novels.