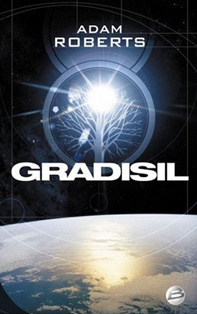 Gradisil is a novel of undeniable ambition. Adam Roberts has constructed a cast of complex, difficult characters and worked them into a dense plot that curls and twists itself around a set of intricate and challenging ideas. From one angle it is a novel about politics, from another it is a generational novel about a dysfunctional family, while from a third it is straightforward space adventure.

The action in Gradisil encompasses three generations of one family who become intimately entwined in the development of the Uplands, a new “state” in orbit around earth. At the heart of it all is the eponymous Gradisil – daughter, wife, mother – who will lead the fight for a free Uplands. It is a vision she inherits from her grandfather and it becomes her legacy to her sons.

The novel is presented as a triptych of connected stories. Gradisil’s mother Klara narrates the first, telling the story of the early days of the Uplands. The second section is partly narrated by Paul, Gradisil’s husband, and tells the story of the “revolution” to set the Uplands free from the influence of Earth’s governments. This story is intercut with the story of Lieutenant Slater, an American soldier battling against Uplands’ freedom fighters. The final section focuses on Hope, Gradisil’s eldest son, and his meeting with his estranged father years after the war.

There are three interesting conceits at the heart of Gradisil, which bear closer study.

The first conceit is science fictional. It posits a future where spaceflight has been removed from the control of nation states and big corporations by the development of “elemag” propulsion, a means of harnessing the Earth’s magnetic fields to allow standard aircraft to crawl into space. The comparison between the shape of the Earth’s magnetic field, swirling out from trunks at the poles and the Yggdrasil – the mystical tree of Norse legend – gives the book and its protagonist their names.

Gradisil’s second conceit is that its protagonists charisma is overwhelming. She dominates this novel – inspiring a fanatical loyalty in those around her – despite the fact that she shows no signs of deserving it. Gradisil’s husband Paul suffers endless humiliations due to his wife’s infidelities and apparent indifference and only breaks at the ultimate cruelty. But Paul is not alone, everyone in Gradisil’s life – her mother, her lovers, her allies, her sons – don’t just accept her cruelty and coldness, they bask in it and then they come back and beg for more.

The novel’s final conceit is political. With space opened, the Uplands become home to a class of wealthy libertarians. It is a class that, at the height of the first Internet boom, Paulina Borsook characterised as the “cyberselfish” – part burnt-out hippies, part ruthless businessmen, part anti-government conspiracy nuts. Against this background Gradisil and her family become the locus around which a revolutionary independence movement coalesces when the planetary powers begin to attempt to assert control over the Uplands.

How convincing these conceits are will depend on the readers perspective.

Elemag technology may be a load of hokum but, within the context of the novel, it feels like a rather smart invention that works for the purposes of the drama. It has specifically defined rules and its limits and advantages are consistently applied. Roberts also does a good job of creating an Uplands that feels believable – cramped, dirty, smelly and scattered – a proper space-frontier for the early twenty-first century.

Gradisil’s charisma seems more problematic. We are asked to accept that this woman is capable of winning the absolute loyalty of followers and of creating a legacy that will redefine the global political map, but we are given little evidence of where this mesmerizing power might come from. She’s a cold, distant and cruel character – which will be most problematic for those readers who need protagonists they can cuddle – but even for the more hardy she is prickly to the point of being untouchable. Since the reader doesn’t experience her charisma directly, there is a gaping hole at the heart of this novel that the reader must fill with faith in the author.

But it is in the presentation of politics in Gradisil is most problematic.

Roberts is well aware of the history of science fiction (he’s published two histories of the genre) so it is tempting to give him a degree of leeway when his writing takes as his subject the kind of anarchic frontier society that science fiction writers love so much. He is surely aware that this kind of frontier libertarianism is a science fiction stereotype that’s almost as prevalent in the genre as the omnicompetent engineer.

As Klara’s narration unfolds in the first section it is tempting to assume that Roberts is being playful in his presentation of the incompetence of government and the superiority of the rich colonists in his land of the cyberselfish. Klara is an unreliable narrator, biased and out to settle scores as she looks back on her youth from her old age, so it is expected that she will present a one-sided story.

But it quickly becomes clear that there’s not going to be any clever subtext to the politics in this novel. This really is just a simple retread of the “government bad, libertarians good” stereotype. Governments are politically inept, their technology is stupid and the individual representatives are casually cruel and incapable of independent thought. The Uplanders are clever, their technology is smart and they’re motivated only by the desire for freedom. There are moments when you sense Roberts’ unease with his “cyberselfish” heroes – he puts them through various stages of suffering, stripping them of their wealth, starving them, forcing them to work together against their individualistic instincts – rather as though he’s seeking to purify them. But victory returns them to their previous, sleekly wealthy, form and ultimately their independence is based on the profits they have sucked up from the world below.

Even for dyed-in-the-wool libertarians this crude presentation of government should feel inadequate. It isn’t just that the stereotype is overused, but like any stereotype, it obscures far more than it reveals. Worse, though, it detracts from the dramatic core of the novel. Where is the great achievement in defeating an opponent that is so clearly incapable and that, despite vastly superior resources, acts so stupidly? These governments, and their representatives, are straw men and there’s not much entertainment value in watching them get dismembered.

The one-dimensional politics of Gradisil undermines much of the good work in the rest of the book. A large part of the second section of the book is spent with Gradisil in hiding, plotting her eventual victory. We wait and wait and wait for her counter attack against the American occupying forces, expecting some stroke of tactical genius. But, when it comes, it isn’t at all clear what Gradisil does that she couldn’t have done right from the start. There’s much talk about potential legal moves, but it all feels like chaff and nothing substantial comes form it. In the end, Gradisil wins because the Americans are too stupid to plan for a predictable attack and too weak-willed to stand up to even one serious set-back. And so the war just ends, and somehow the Uplands are free and all the tension of the previous chapters dissipates.

As a novel Gradisil is ambitious and there is much to enjoy. There is, for example, a lengthy passage where Lieutenant Slater falls from space to the Earth that can easily stand alongside the most gripping and vivid scenes that science fiction has to offer. But, as a whole, the novel falls short of greatness. The crucial character of Gradisil is left too distant from the reader to allow us to appreciate the hold she has over those around her and the politics is too clumsily handled to deliver convincing tension.

Ambition can be an admirable quality but it can also be a tragic flaw, and while Gradisil is hardly a disaster of tragic proportions, it does fail to sustain the very highest standards that it promises to achieve.

Adam Roberts has a great book in him. This isn’t it, but he’s getting closer.