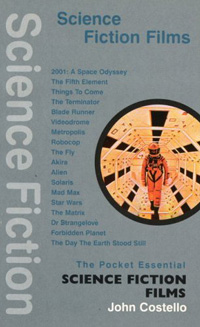 In the introduction to The Pocket Essential Science Fiction Films, John Costello mentions one of my favourite books about sf films, Bill Warren’s Keep Watching The Skies. I have shelves full of film encyclopaedias that have been rendered more-or-less redundant by the Internet Movie Database (www.imdb.com), but Warren’s book is one I return to often.

It isn’t because Keep Watching The Skies is particularly comprehensive, the book is impressively large but covers only the years 1950 to 1962, and even then it can be idiosyncratic. However, Warren’s personal perspective makes it irresistible. It is much more than facts, figures, dates and details. Keep Watching The Skies is as much a social history of geekdom as it is a reference guide to the glory days of sci-fi.

Which only serves to highlight a problem facing not just Costello’s Pocket Essential but all new film reference books. With the mass of information available, and constantly updated, on the Internet it is no longer enough to provide “just the facts.” Books like this need a unique selling point, something that sets them apart from the crowd. Ideally, all such books would be as indiosyncratic as Keep Watching The Skies but there aren’t many people capable of making their own engagement with film as compelling and entertaining as Bill Warren. Presumably the publishers are hoping that it is the Pocket Essential’s portability will help them find a potential audience.

To be fair to Costello, he maintains a strong and consistent personal viewpoint throughout this book. Costello likes films that can lay claim to strong intellectual credentials, so he heaps praise on Kubrick’s 2001 (“the best science fiction film ever made”) and Tarkovsky’s Solaris, but he also has a soft spot for the less cerebral John Carpenter (citing both Dark Star and The Thing in his top ten sf movies of all time). Though praising THX-1138 he is largely dismissive of Lucas, while Spielberg’s work is repeatedly rejected as childish. Waterworld, Independence Day and AI make it onto his list of worst ever sf movies.

However, the book’s small format, its unique selling point, necessarily limits its scope and that causes problems. First, Costello has nowhere near enough room to contextualize the films he discusses – America’s fifties’ “reds-under-the-beds” paranoia gets a single, slightly confused, paragraph. Second, given the limited space, the selection of films sticks pretty rigidly to the mainstream and so dedicated sf fans will find little here to lead them down paths towards new discoveries. There are asides for foreign language films like Solaris and Alphaville and a section on animated movies that at least lets Akira and Ghost in the Shell get a mention – though it (unforgivably) gives the desperately dire Final Fantasy: The Spirits Within four stars – but there are few surprises in this selection.

The result is that there are times when the book feels rather shallow. This, of course, may purely be down to the restrictions of the format (small pages, large type) but, even allowing for this, the choices can feel lazy. It may be, for example, that Waterworld, Independence Day and AI are bad movies, but to list them as amongst the worst of all time suggests that Costello just hasn’t tried hard enough to see really bad films. Kurt Wimmer’s Equilibrium is an offensive and stupid film, Marlon Brando’s The Island of Doctor Moreau is a terrible movie, and The Creeps, B-movie “legend” Charles Band’s worst film, is as bad a movie as most people will ever see. None of those make it onto Costello’s list – and even these are not the worst. There are many, many films that make Independence Day look intelligent, Waterworld feel fast-paced and AI hard-boiled. Those high profile, big-budget, blockbuster may be easy targets but they don’t come close to being as bad as movies like Recon 2020 or Bio Hazard or, Lord help us, Roy Chubby Brown’s UFO: The Movie.

Despite Costello’s engaging writing style, this book doesn’t appear to have a purpose. There isn’t enough that is new for the reader who already possesses more than a passing knowledge of sf film, but why would a non-fan choose a sf specific film guide over one of the numerous general references to film already available? The Pocket Essential Science Fiction Films will fit in your pocket, but it hard to imagine that anyone will find it essential.