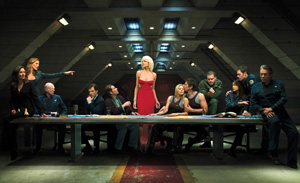 Television drama rarely specialises in big ideas. Amongst the comfortably circumscribed crises that litter soaps, medical dramas and police procedurals there is little room for questions about religion, identity or politics.

Which is what makes the new incarnation of Battlestar Galactica (BSG – season two now available on DVD) so unusual. Almost every episode contains some huge issue and BSG doesn’t just slip this stuff in under the radar as metaphor – questions about belief, faith and the nature of humanity are right in the frontline, driving forward the plot every bit as much as the battle between humanity and the Cylons. Most rewardingly BSG also contains a satisfyingly complex political streak that is contemporary, engaged and dramatically powerful.

Comparisons between Glen A Larson’s Battlestar Galactica from the 1970s and this modern incarnation are revealing. Larson, a conservative and Mormon, also filled his show with religious and political allegory, but it was one-dimensional. The original BSG transposed the writings of the Mormon faith to a futuristic setting but the politics remained firmly rooted in the Cold War. His Cylons were militaristic communists in shiny armour and the battle was simply good versus evil. His human community was wholesome and, apart from a pantomime villain, united.

The political drama in the modern BSG almost entirely derives from the conflict between “civil rights” and “military necessity” in the show’s fractured, space-faring polis. The ensuing struggles are clearly influenced by the ongoing “war on terrorism”.

In season two episodes “Fragged” and “Resistance” Adama’s second in command, Colonel Tigh, suspends the democratic constitution and imposes martial law in an attempt to impose control. The results are predictably disastrous, with Colonial troops shooting unarmed protestors aboard the ship Gideon.

The “Gideon incident” reverberates throughout season two, provoking the need to “manage” the media and increasing the tension between civilians and the military.

In “Final Cut” a journalist, D’Anna Bier (Lucy Lawless) is asked to make a documentary about the “human face” of the military. D’Anna’s scepticism, she fears that the price of access will be her editorial independence, reflects contemporary concerns about the reliability and credibility of the media under the conditions of war. Throughout the episode the tensions between the freedom of the press and the needs of the military are made plain, though perhaps the episode ultimately disappoints when the final “documentary” lets the military off the hook.

In the Pegasus arc (“Pegasus” and “Resurrection Ship” parts one and two) high octane space battles play second fiddle to an argument about the importance of civil rights during a military crisis. The discovery of a second surviving Battlestar, the Pegasus, commanded by Admiral Cain (who outranks Adama and who has no qualms about trampling the constitution) causes friction and brings what’s left of humanity to the edge of civil war.
Perhaps the most interesting conflict in the Pegasus arc relates to the contrasting way in which Adama and Cain treat their prisoners. Adama is hardly soft on Cylons but Cain has permitted maltreatment and the grossest torture on a captured female Cylon and seems set to do the same to a member of Adama’s crew who has been revealed as an infiltrator. Cain’s attitude to prisoners and her pre-emptory military justice creates a rift between Pegasus and Galactica and results in a fantastically tense “will they/won’t they” assassination sequence.

The question of the continued utility of historic civil rights in the face of a military threat has obvious contemporary associations in the era of the “war on terrorism”. It is clear that the sympathies of the writers are with Adama’s uneasy democratic compromise rather than Cain’s military dictatorship but BSG offers no pat solutions. The military are necessary, their work benefits all, but the maintenance of a balance between their need to act decisively and the needs of a political order to preserve the rule of law has no simple solution.

BSG is much more complex than most contemporary political dramas. The issues it addresses are not presented as simply “right” versus “wrong” but are expressed by characters who are complex, engaging and difficult to pigeonhole.

The warm, likeable President Roslin, is actually an arch conservative capable of making decisions that would have even Bush Jnr blinking – opposed to abortion (“The Captain’s Hand”), courting religious fundamentalism and executing captured Cylons –  she still remains the most vocal and influential voice for democracy and the rule of law. Adama, by contrast, appears straightforwardly authoritarian – he is the face of the military and the voice of authority – but by the end of the season he is able to see “humanity” in the Cylons, he demonstrates that he will fight to the death to preserve civil liberties and he saves the democratic system when Roslin succumbs to the temptations of expedience. Even the Cylons get complex and plausible characterisation with divisions and beliefs and distinct motivations.

BSG does two very rare things. First, it recognises that while politics is messy, annoying and full of political differences that may be forever intractable, the democratic political process remains crucial to any kind of good society. And, second, it asks the viewer to do a very difficult thing – to like and respect those with whom you fundamentally disagree. BSG contains characters and plot elements that can resonate with or infuriate those on both the left and the right, yet it almost never collapses into a cosy centralism that imagines that everything would be better if people could forget their principles and “just get along”.

BSG doesn’t offer solutions or manifestos – indeed it rarely editorialises – but, at a time when loyalty is demanded and dissent is suspect, this sf show is doing something rather radical – it is encouraging people to think.

This entry was posted in Journalism, Other reviews, Review and tagged Matrix, reviews, sf, tv. Bookmark the permalink.