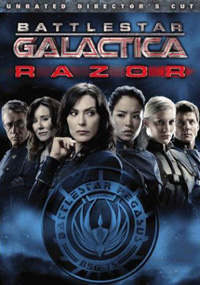 The real strength of the current incarnation of Battlestar Galactica (BSG) has been its ability to use its futuristic setting and the basic conflict humans and machines to place its characters in realistic, morally complex and ethically challenging situations. Its great achievement has been to create a set of multi-faceted characters who retain the audience’s sympathy even when they make horrible choices.

BSG: Razor follows the path of Kendra Shaw (Chaves-Jacobsen), a young lieutenant who, in the days prior to the devastating Cylon attacks on the human worlds finds herself posted to the Battlestar Pegasus under the command of charismatic, ruthless Admiral Helena Cain (Michelle Forbes).

Shaw falls totally under the sway of Cain and, as the Pegasus struggles to survive – isolated and apparently alone – following destruction of the twelve colonies, Shaw becomes the most loyal and unquestioning followers of the Admiral as she pursues the maintenance of order by any means necessary. Summary execution, torture and mass murder, Shaw is not just witness but willing participant in them all. She becomes a monster.

And yet, and this is why BSG is particularly admirable, she is no simple cipher. The viewer cares for Lieutenant Shaw. Each step she takes is carefully mapped out, plausibly explained and we not only understand her actions, we can feel sympathy for them. It is only when she takes the final step – when she commits the most heinous of acts – that the viewer becomes aware of how far we have all travelled from the ideals she once upheld. That realisation comes like a cold slap in the face for both the character and the audience.

How many of us would have taken the same path? How many would have done exactly as Lieutenant Kendra Shaw did?

Of course we know that Cain’s regime is ultimately doomed – that she will be removed by Adama when her dictatorship comes into conflict with the mixed democracy of the Galactica fleet. But here again, BSG Razor reveals a surprising twist. Because the new order can’t do without the discipline of Cain’s followers and, so, after her idol’s downfall, Shaw remains in a position of power – despite what she’s done in the past.

Mixed in with all of this there’s some fantastic space battles (as always with BSG), there’s the return of the original look Cylon warriors, the search for a mysterious Cylon hybrid that has been conducting experiments on humans and revelations that are likely to echo through the next full season of the series.

Ultimately, of course, Shaw gets the opportunity to commit an act of heroism that goes at least a little way towards her redemption but it’s almost beside the point. The power of BSG: Razor comes from the way that it places a sympathetic character in an impossible situation and makes us sympathise with actions that we could and should find appalling.

BSG Razor demonstrates why this series remains the most potent and intelligent sf to appear on the small screen. We’re going to miss it when it is gone.

This entry was posted in Journalism, Other reviews, Review and tagged Matrix, reviews, sf, tv. Bookmark the permalink.