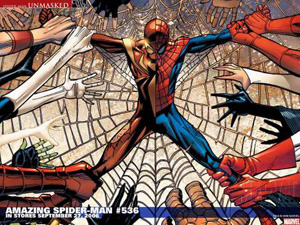 In a recent review of Heroes in The Times, Kevin Maher argued that it was a sign of the fundamental decline of American politics that superheroes were being used to address serious political issues. Can superheroes do politics? Does the very act of dressing serious issues in spandex and transplanting them into an artform that remains predominantly an enclave for juvenile boys cheapen the whole political discourse? Martin McGrath looks to some recent Marvel comics for answers.

“I find it both morally and artistically repugnant that the most urgent political crisis of our time, one that’s currently claiming thousands of lives every month, can be denuded of all context and cheerily co-opted by the wish-fulfilment fantasies of some insular adolescent jerks. It is, surely, a sign of growing American political apathy when the cultural response to the Iraq crisis is simply to send Magneto into Baghdad. What’s next? Spider-Man for president? Wonder Woman at the UN? Or would that just be silly?”
Kevin Maher, The Times, 20/02/07

It was Vector editor Niall Harrison’s excellent blog Torque Control that brought this review of new sf show Heroes to my attention. I thought the review was unfair in a number of ways – not least in impugning a political mission to Heroes that it simply doesn’t possess. But what struck me most forcefully about Maher’s comments wasn’t that he didn’t like Heroes but that he was outraged (not just morally but artistically – it really is quite something when a television reviewer is artistically outraged) and that he considered it appalling that a superhero story should dare to deal with serious political issues.

Maher spew of rhetorical questions – Magneto into Baghdad? Spider-man for president? Wonder Woman at the UN? – clearly reveals that he hasn’t been paying attention to comics in the last twenty-five years. Even if we set aside the high-brow end of the comic world inhabited by the likes of Maus or Watchmen – the use of the comic book as a medium to deliver political allegory is hardly new.

Stan Lee’s X-Men pitted the integrationist Xavier against the separatist Magneto right in the middle of America’s great civil rights struggle when the conflicting ideals of Martin Luther King and Malcolm X were battling for the soul of black Americans. Neal Adams and Denny O’Neil reinvented DC’s Green Arrow as a left-wing successor to Robin Hood in a seminal run of stories in the early 1970s. More recently the ante has been upped by writers like Warren Ellis and Mark Millar – who in bordering runs on Wildstorm’s The Authority imagined a world where a superhero team imposed itself as a world government.

At the same time as Maher published his review I was doing some catch-up comic reading of my own. Specifically I’ve been reading Marvel’s current company-wide crossover story Civil War – the story of the bitter divisions that rend the Marvel Universe’s superhero community when the government introduces a “Superhero Registration Act” that requires all costumed heroes to give their secret identities to the government and work on government sanctioned teams.

What is interesting about the story, and what I believe would utterly flummox Kevin Maher, is that this vast, commercial and populist enterprise takes as its central thesis the conflict between civil liberties and collective security in an time of fear and distrust sparked by a terrible act of destruction. The story is clearly intended to be seen as a commentary on America after the attack on New York and the introduction of The Patriot Act. And it addresses its topic with no small degree of subtlety.

The Superhero Registration Act is introduced when one of Marvel’s B-list superhero teams – The New Warriors – bungle a battle with a team of super villains. The result – in a genuinely shocking sequence – is the vaporising of a good section of Stamford Connecticut, destroying a school and killing 600 people – including many children and most of the superhero team.

Some superheroes, notably a group of Marvel’s plutocrats including Tony Stark/Iron Man and Reed Richards of the Fantastic Four not only go along with the Registration Act but take it upon themselves to commit to ensure its full realisation. Vast detention centres are built, not in Cuba but in the Negative Zone. Individuals are detained without trial and those who refuse to go along with registration are immediately branded as traitors accused of being pro-terrorist and hounded by the forces of “law and order”. But the pro-registration group are not simply dismissed as villains, they’re allowed to present themselves as patriots with the best interests of the whole nation at heart. They’re allowed to point to the tragedy at Stamford and most are given reasonable motivations for their stance.

Meanwhile the freedom-loving liberals, with Captain America as their figurehead, aren’t quite let off the hook as straightforward good guys. Several intermediaries plead with Captain America not to pursue a violent response to the new laws but his unwillingness to bend eventually leads to a battle that causes the death of a large, likeable, but hardly A-list Marvel hero.

In the end, though, the pro-registration argument is undermined. They are seen to be making increasingly murky deals with dangerous elements. There are suspicions of corruption, profiteering and manipulation. There good intentions are twisted by the proximity of power and the scheming of the wicked — not, in this case Donald Rumsfeld but Norman Osborn. As is so often the case in Marvel’s alternate universe it is Spider-man who acts as the conscience of his fellow heroes. At first he joins the pro-registration, but Peter Parker gradually becomes disenchanted with the choice he has made and his journey from one side to the other provides the narrative thrust that places Marvel firmly in the liberal camp.

Civil War is far from perfect. Some of the characterisation is questionable – Reed Richards in particular behaves in a way that grates against decade’s of continuity – and there are too many red sky additions (issues of comics that purport to be part of the larger story but are, at best, only tangentially linked – the main story simply a background detail, like a red sky).

But, at well over 100 issues in total – approaching 3000 pages of comic book art – and employing literally dozens of artists and writers, there can be few artistic endeavours that have enlisted so many talented individuals to construct a story that has such significant and urgent themes at its core. There can have been few more concerted artistic endeavours aimed at addressing the current political crisis. And all this in a unabashedly commercial medium.

This is not some elitist endeavour destined for minority interest television channels or art-house cinemas or even the dustier shelves of comic book stores’ graphic novel sections. The Amazing Spider-man is consistently one of the highest selling comics in America – it’s as close to prime time as a comic gets. So when Peter Parker states:

“The question isn’t what does a country stand for when things are easy. The question is what does a country stand for when standing is the hardest? When does the country we’re living in stop being the country we were born in. If the cost of silence is the soul of the country… if the cost of tacit support is that we lose the very things that make this nation the greatest in human history, then the price is too high.”

You can blush at the innate American nationalism (the greatest nation in history?) but you can’t avoid the fact that Peter Parker is here asking fundamental questions about the balance between security and liberty to the largest possible audience this medium can muster. It’s a little like one of the Mitchell brothers suddenly ponderng the nature of the human soul on EastEnders.

Should people like Maher be appalled or repelled by the willingness of writers and artists to use superheroes to tell serious, complex, political stories? Does it somehow cheapen the political debate? I honestly can’t see how that could be the case.

One may, of course, wish to be critical of the shortcomings of particular stories — not all of the politics evident in comic books does anything but reinforce the worst instincts of young men who may already be somewhat disassociated from social networks and prone to give to much credence to the possibility of achieving acceptance through violence. But to suggest that the simple act of framing political debate within a particular fantastic milieu means that it is somehow automatically “denuded of all context and cheerily co-opted by the wish-fulfilment fantasies of some insular adolescent jerks” is nonsense. It seems to me that, even for the most insular of geeks, the very least a story like Civil War can achieve is to slip the roughage of political debate into their everyday pap.

For me comics – and particularly Marvel comics – were a place where I first found a serious discussion of political issues that weren’t hidebound by traditional hatreds. Yes they were dressed up in spandex but the work of Stan Lee and other Marvel writers deliberately and regularly sought to tell stories that preached tolerance and acceptance and the basic equality of man. They were also stories of hope, that people could, when power brought responsibility, be counted on to try and do the right thing.

Growing up in 1970/80s in Northern Ireland there were few enough places to find stories like that and too few examples of heroes. Even as a child I could sense that something was wrong about the place I lived and so discovering a different mindset in the racks of yellowing US comics in the newsagents of Bundoran or in the monochrome reprints of Marvel UK was something like an epiphany. A moment that opened doors to new wolrds and new ways of thinking.

Mark Millar, Brian Bendis, Joe Quesada and the others behind Civil War seem to me to have placed their feet firmly in that Marvel tradition. In the real world we appear to have moved into an era where the bitter divisions, intolerance and hatred that I saw as a child have, in slightly different forms, engulfed the whole world. A few glossy pictures and speech bubbles won’t change this but it does make every voice speaking up for tolerance more precious.

Superhero comics won’t save the world, but maybe stories like Civil War will make a few thousand (or a few dozen or even one or two) impressionable young boys think a little harder about how the world is organised. Perhaps they’ll start to question the some things they’ve been told to take for granted. They might becone a little more open to that which is new or different or foreign. It might stop them becoming “insular adolescent jerks” in the first place.

Perhaps it’ll will open their minds to new possibilities.

And isn’t that what good art should do? Whatever the medium and whether the hero wears spandex or not?

This entry was posted in Feature, Journalism and tagged comics, Marvel, Matrix, reviews. Bookmark the permalink.