MARK STIRTON: WRITER/DIRECTOR OF “THE PLANET” 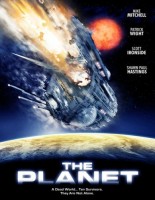 Aspiring film-makers with the ambition and drive to tell their own stories are, however, far less common. Mark Stirton is a very rare thing indeed, because he has crossed the boundary from making “fan films” to producing a genuine feature-length movie based on his own original story. The ambition evident in the making of The Planet is astonishing – most film-makers with no budget and no feature-film experience might aim to make something small scale and intimate. Very few people in possession of all their faculties would think of making a high-concept, special-effects-driven, monster movie (with space battles and giant creatures striding across an alien planet) for just £8,000.

So, when I interviewed Mark Stirton about the making of The Planet, the obvious question was: What were you thinking?

“Good question! This was a thought which ran through my own head quite a few times during the post-production period. I guess I was just thinking: if I can pull this one off then there is little else that would be out of the question. If I can make this, I can make anything.”

This wasn’t Stirton’s first attempt to make the story that became The Planet, a previous short film version floundered and was abandoned in the mid 1990s. What made it possible to tackle the film now?

“Technology. The first time everything was still “old school”. Composite effects were very basic indeed and editing had to be done by booking a suite and watching your money disappear. But with low cost digital editing, everything changed. And I’m not talking mega high specs, the whole of The Planet was made on two home Macs. But those computers were light years ahead of what I had available in 1994.”

The effects in The Planet are both ambitious and absolutely integral to the story – it’s impossible to imagine the film existing without them. Yet neither Stirton nor anyone on his crew had significant effects experience before production got underway. Wasn’t there potential for the film to be a total disaster if the effects didn’t work?

“No. It would never have been a disaster, it just would never have been finished! We were going to make it as good as we could or just dump it. The first creature attack was the key sequence. If that worked then we’d finish the film. We looked at it and felt it had worked well enough to continue, but it was fifty-fifty for quite a while. Even the stuff in space was expendable to an extent. If that had not worked I could always pick up the story on the planet. But the creature effects were key. Also (because I’m stupid) I only filmed it one way, so the special effects had to be done.”

Post-production took eighteen months to complete – with Stirton and two colleagues learning CGI techniques on the fly. Weren’t there times, I asked, when they felt like jacking it all in?

“One of the good things we started was the Thursday meeting, we’d get together every week and show each other a shot or a test or even just an idea. In a situation like that no-one wanted to be the first to say ‘Lets give up’. We kept each other going.”

The Planet is clearly made by someone who has watched a lot of science fiction, but were there any particular influences that he drew on for this film?

“I love sci-fi! I’m an old Dr Who fan, can’t get enough of it. As for influences, I looked a lot at The Thing. My film is not as good as The Thing but I wanted to aim that way, with sand instead of snow and an all male cast.”

The similarities with John Carpenter’s work (director of The Thing) struck me the first time I watched the film – the blue collar heroes and the unexplained monsters – but also in the music. The Planet has a very effective soundtrack which feels a lot like the music Carpenter composes for his movies.

“I would agree with that, but it wasn’t by design. Nicky Fraser, our composer, hates scary movies and refused point-blank to watch The Thing. So I just told her to go off and do her own stuff. The only music we listened to together was The Matrix for some of the action stuff. When the music came in, I recognised the Carpenter-like quality, but Nicky didn’t. It grew from the idea of the planet being alive – from heart beat to beat and from beat to Carpenter.”

Scotland is a bit of a hot spot for sf at the moment with authors such as Iain M Banks, Ken MacLeod, Hal Duncan, Charles Stross (and many more) who are Scottish or working in Scotland and enjoying success within the genre. Did Stirton think there was anything in particular about today’s Scotland that makes it such a fertile place for sf?

“I think it’s a reaction to what we’re constantly being fed up here, not the food, but the diet of (drab Scottish soap) River City and Trainspotting. Everything is bloody, gritty and dull, so some of us have started to use our imagination instead. I suppose we’re just trying to stand out from the crowd a bit and the easy way to do that is not to make films about single mothers and junkies.”

So taking a gang of burly Scottish blokes, putting them in space and making them fight monsters is a reaction to River City?

“Absolutely! It was always my intention to put working class Scotsmen into space. No one else had ever done that on film. The idea of a real Scottish accent is space is just great and I get a real impact by not doing very much, just letting the actors talk. And I wouldn’t make them scum just because they are working class. I’ve run out of hairs to pull watching Scottish films where the cast are all bastards, drunks, junkies and hard men. We’re a nation of clichés! And the daft thing is, it’s not true. We’re a nation of interesting, hard-working thinkers who have invented some of the best stuff in the world. Unfortunately the working classes are usually written and directed by people who’ve never met them, but think they know them. And that’s why it rarely rings true.”

Stirton didn’t have much luck when he approached the film-making establishment in Scotland for support – Scottish Screen rudely dismissed him as unworthy of their attention. Was that, I wondered, because he pitched a sf film or because he didn’t conform to their picture of a film director?

“Both. I’m working class, but I don’t want to make what they consider to be working class films. So that annoys them. Also it’s sci-fi! Look at how much sci-fi Scottish Screen had ever funded. It isn’t much and, when they do, it’s usually pretentious dribble. Not to mention, and I have some sympathy for them here, that the script looked impossible to make. Even I didn’t know if it was possible. So they have trouble making that leap of faith and trusting in a film-maker, it’s easier to go for the familiar project without risks.”

American film-makers who produce their own low-budget films get praised and pursued by big studios but the attitude in this country seems to be much more about following rules and working your way up “by the book”.

“I’m afraid that’s true. I don’t want to blow my own huge trumpet too hard, but if I was in America I believe I’d be working for a major studio right now. But here the attitude is quite different. It’s ‘Who does he think he is?’ and not ‘Well done!’ You can knock out a five minute black and white short and be called a director in America. Here I get a lot of ‘amateur director’ and ‘would-be film-maker’, that kind of thing.”

At the end of the documentary on The Planet DVD, Stirton suggest that The Planet takes his film-making as far as it can go with the technology and budgets at his disposal, and that this might be his last film. Is this still the case?

“As it happens The Planet has led to me being offered a six-figure sum to do a new film. Still a low budget, certainly, but at least I have a budget this time. The money has come from a millionaire oil CEO who saw The Planet and asked if he could be of any help. We cut to the chase and managed to get backing for a new project. It’s a comedy. I was tempted to do another sf film, but we’ve been given the chance to buy High Definition equipment this time round and doing special effects on HD is even more difficult! So it’s a smaller, funnier, but still a working class and heroic film.”

And then what? If money was no object, what would he love to do?

“A big budget American sci-fi film would be nice. I have a great idea for Alien 5! Lots of British directors are a little snooty when it comes to that sort of film. Not me!”

You can read my review of The Planet by clicking here.

This entry was posted in Interviews, Journalism and tagged film, interview, Matrix, sf. Bookmark the permalink.

One Response to MARK STIRTON: WRITER/DIRECTOR OF “THE PLANET”