DAVID PROWSE: THE MAN IN BLACK 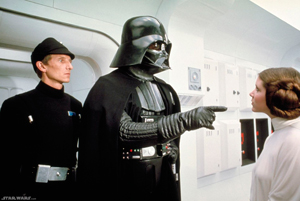 Martin McGrath talks to David Prowse about the benefits of being Darth Vader and why he believes performers should think carefully about protecting their future when they sign a contract.

David Prowse, it seems, was destined from the very beginning to spend his acting career dressed from head to toe in black, wielder of a mysterious force. Certainly that’s how he got started on stage – lifting Kenneth Griffith from his death bed in a production of Don’t Let Summer Come at the Mermaid Theatre – long before, as Darth Vader in Star Wars, he became the galaxy’s favourite villain.

His career as an actor followed time as a bodybuilder – competing in Mr Universe in 1960 – before becoming the British heavyweight weightlifting champion from 1962-64 and competing in the Empire and Commonwealth Games in Perth in 1962. He was working as a sales rep for a health and fitness company when Reub Martin, another bodybuilder who also ran Tough Guys stunt agency, suggested that there was always work in the acting business for someone of his formidable stature.

“Well, I never gave it any more thought,” David said. “But then one day a couple of weeks later I get a call saying can I go to the Mermaid Theatre. In the big finale of the play the main actor, Kenneth Griffith, was waiting for death to take him away and what they wanted was for Kenneth Griffith to be levitated up into the air. So they hit on the idea of doing it with wires but that didn’t work so they thought they’d try and get an actor in to lift him. So they got all these different actors in and no one could do what they wanted, but Bernard Miles got in touch with a stunt agency to see if there were any strong men around. So Reub got on the phone to me.”

Where others failed, David succeeded. ”I scooped Kenneth off the bed, held him out at arm’s length and said: Where do you want him? So they asked if I could do it twice nightly. And I said, if you pay me enough I’ll do it as often as you like.”

The last-minute casting meant that his name never got into the programme and the role saw him dressed from head to toe in black so that he was all but invisible to the audience. His first outing hardly brought fame, but it did get him an Equity card. “I was obviously doing a job that another actor couldn’t do so I got my Equity card. Then the stunt agency sent me out for various different roles and it sort of snowballed from there.”

The role that made David Prowse most famous was, of course, as the evil emperor’s apprentice Darth Vader in George Lucas’s Star Wars trilogy. By 1976 he was a regular on television and film but it was still a surprise to get call from a friend who was then head of Twentieth Century Fox in London. “Out of the blue one day I got a phone call and he says: I don’t know whether you’re interested or not but I’ve got a guy here called George Lucas who has come over from America and he’s looking for you.“

Lucas had seen David in Stanley Kubrick’s A Clockwork Orange, in 1971, and he’d remembered him for five years. Now, putting together the cast for Star Wars, he wanted his man. Lucas had two roles in mind – Chewbacca, the hairy gorilla-like creature on the side of the good guys, and Darth Vader, the main villain. David turned down Chewbacca, partly because he didn’t want another masked role and partly because he thought that everyone would remember the villain.

“Of course I didn’t know at that time that Vader was also a masked part. But it all worked out very nicely for me. Darth Vader became the cult figure of the series and a big role in the subsequent movies and it’s stood me in good stead for the last 30 years.”

Star Wars went on to become one of the biggest movies of all time spawning sequels and spin-offs to this day. The movie broke new ground in the way it sold merchandising, creating huge profits and in subsequent years the film’s owners have proven themselves experts in manipulating every new medium to make vasts sums of money from the original films.

It was the sort of success that no one could have expected and the contracts at the time made no allowances for the money that would eventually flood in. “We signed on for a fixed contract. The only thing other than the salary that you were going to earn was that we were going to receive a residual on earnings from cinema showings of the movie. Actually for the first one we just did it for a straight salary, which was typical of the time, the residual came in for the second and third films. Then when the first film came out and was obviously a big hit, George Lucas came back and gave me a $6,000 bonus.”

David is keen to stress that he has no axe to grind with Lucasfilm or George Lucas, he was very happy with the bonus at the time and over the last 30 years the role of Darth Vader has been good to him, with public appearances, conventions and signings providing a significant source of income. But he can’t help feeling a little disappointed that, as his performance contributes to the creation of vast amounts of wealth, he has received relatively little.

“The residuals that we were given for The Empire Strikes Back and Return of the Jedi were for a small percentage of the cinema take. But you only got any money when the film went out on the big screen. In the last thirty years you can count the number of times it’s been in the cinema on one hand and its never returned much money. I get these occasional letters from Lucasfilm saying that we regret to inform you that as Return of the Jedi has never gone into profit, we’ve got nothing to send you. Now here we are talking about one of the biggest releases of all time. Back then there was no sell through or home video market and our contracts didn’t cover anything like that. Now when you sign an Equity film contract they stipulate about DVD and video rights and then they add this line: Or anything yet to be invented – which I wish had been in my contract. But even in 1982, when Jedi came out, there was no way to predict how things were going to change.”

His advice to performers today is – take care with the papers that you sign and make sure that your contracts properly protect you for all eventualities.

He feels it’s a little unjust that performers who did so much work to make the Star Wars films such big hits and whose performances are still being used to generate substantial profits haven’t shared in the wealth.

“I’m eternally grateful to George Lucas. When Star Wars came out and I got the cheque for $6000 I was very surprised and very pleased. And there is a huge convention scene around the world. Darth Vader is the cult figure of the whole trilogy so he’s a very popular character and I can turn up at things like the Disney Star Wars weekends and people are queuing up overnight just so they can be at the front of the queue the next day to make sure they get a signed picture from me. It’s great to know that my performance is valued and appreciated by the fans.”

Those fans clearly believe that David’s performances were central to the Star Wars films and, even more than 30 years later, they continue to appreciate his work and they’re still queuing to see the “man in black” – but perhaps the lesson that all performers should take from his experience is that you can’t be too careful about the contracts you sign.

This entry was posted in Interviews, Journalism and tagged arts, equity, interview. Bookmark the permalink.