Posted on November 5, 2019 by Martin McGrath 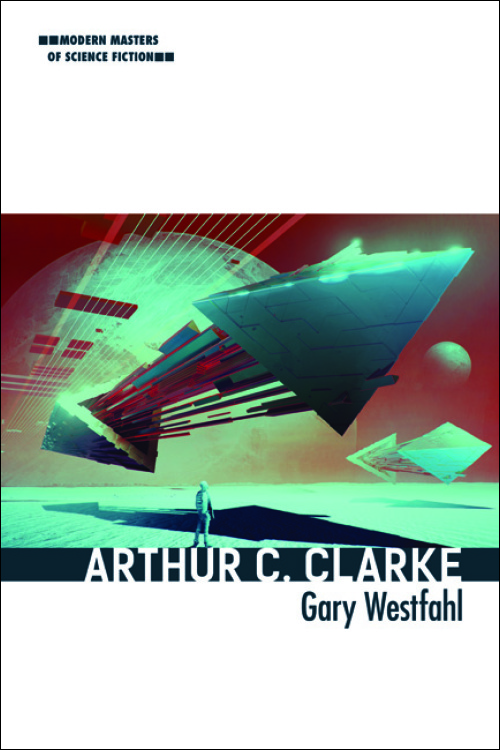 Gary Westfahl has been a bit unlucky. After reading his Arthur C Clarke – an instalment in the “Modern Masters of Science Fiction” series from The University of Illinois Press – and while I was trying to work out what to say in this review, I picked up two books. The first was No Laughing Matter, Anthony Cronin’s fine biography of Irish humourist Flann O’Brien. The second was Working by Robert A Caro, in which America’s greatest living biographer (probably, he’s certainly its most thorough) discusses how he gets to grip with his subjects. Both helped me crystallise the sense of frustration that  kept growing in me as I was reading Westfahl’s book.

For Cronin the city of Dublin is at the heart of the story, providing not just the background to O’Brien’s life and literature but immersing the reader in the world that gave birth to them. Caro, meanwhile, describes months spent in Texas winning the trust (with his wife’s considerable help) of the women who were the backbone of the rural community in which his subject, Lyndon B Johnson, grew up. He describes nights spent alone in the wilderness near the Johnson ranch. All done so that he might better understand the crippling poverty and loneliness of Johnson’s childhood.

By contrast, Westfahl’s book feels like an insular thing: a work that rarely steps outside the covers of Clarke’s books. Whether Westfahl is discussing Clarke’s juvenile (both senses) “indulgences in infantile humour” or the sense of impermanence (perhaps even futility) in his description of mankind’s attempts to control our environment, I never felt him get under the surface of his subject. Any author discussing Clarke is, of course, somewhat hamstrung by the fact that his personal papers remain sealed but this book’s lack of contextual weight bothered me throughout.

It’s not that I was expecting Westfahl to ape Caro and relocate to Somerset to grasp some of what it must have been like for a young man growing up in a rural community, without a father, in the depths of the economic and political crises of the 1930s. But this must have been important in shaping Clarke’s outlook. And so must have been the experience of being a gay man in post-war London. And of being an Englishman in self-imposed exile in Sri Lanka as his homeland declined from pre-eminent global empire to modestly influential European nation. I would argue all these experiences can be seen in Clarke’s work – indeed, give me the chance, and I can bore you at length about how Clarke – inheritor of Wells and Stapledon’s tradition of English socialist (small “s”) science fiction – is, perhaps above all else, a writer of the end of empire.

Westfahl touches on some these things, but his prime focus is very much on the texts and on their genre trappings. So there are discussions on Clarke’s predictive powers regarding technology, on whether he really believed in aliens, and on his attitude to space flight. There’s even a discussion on religion in which Westfahl seems determined to rescue a meaningful sympathy for religion from the scattering of polite words that Clarke, a public and avowed atheist, puts into the mouths of a handful of his characters. This literalism feels parochial and I don’t think it does Clarke’s justice.

None of this is to deny Westfahl knows his subject. He has done his research. His familiarity with Clarke’s work (novels, short stories and ephemera) is never less than prodigious and the book’s bibliography (not just of Clarke’s fiction but including poetry, non-fiction and even selected TV appearances) is a useful addition for anyone interested in Clarke’s work. Sometimes Westfahl could have been less keen to demonstrate that extensive knowledge, I would have been happier with fewer lengthy lists of plot summaries, but there’s no denying the depth of his knowledge, the seriousness of his intent or that he draws out of all this some interesting insights.

However, in never straying far beyond the pages of Clarke’s published writing, and in rarely seeking to place those works in a meaningful historic or social context, Westfahl’s book provides a useful introduction to Clarke’s work without ever convincingly demonstrating why it should matter.

This review was published in BSFA Review no.8, November 2019.

This entry was posted in Other reviews, Review and tagged 2019. Bookmark the permalink.