REVIEW: VIRTUES OF WAR AND GHOSTS OF WAR BY BENNETT R COLES

Posted on September 1, 2018 by Martin McGrath

The latest issue of The BSFA Review (no.4, Summer 2018) has been published. It contains two of my reviews.  The first one – of a pair of military sf novels by Bennet R Coles – is below. The second will follow shortly. 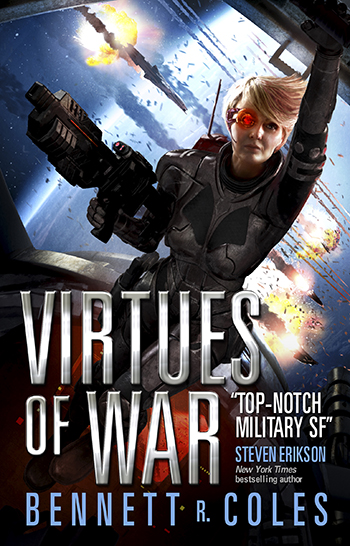 Bennett R Coles is a former Canadian naval officer. His first two novels (of a promised trilogy) are part of that military science fiction tradition that values “authenticity”. What that means, in this case, seems to be a fondness for three letter acronyms, recounting the petty frustrations of military life and detailed portrayals of brutal violence.

These books are set in a future where humanity has spread to planets around nearby stars and Earth is struggling to assert control over fractious colonies. In the first book a Terran task force, deployed as a show of strength in the Sirius star system, becomes the trigger for the start of a widespread rebellion and must fight its way home through enemy territory. Virtues of War follows the adventures of four core characters. Lieutenant Katja Emmes is the leader of a “strike team” of marines and scion of a military family who feels she has something to prove. Lieutenant Commander Thomas Kane is the ambitious but weak commander of her ship, The Rapier. Lieutenant Charity Brisebois is The Rapier’s communication officer, but she is also a ruthless, driven, intelligence officer with a nastily Machiavellian streak. Finally, Sublieutenant Jack Mallory is a puppyish pilot trained in stealth warfare and, handily for the plot, a savant in advanced, exotic physics. In Ghosts of War, this cast of characters find themselves back on Earth, some struggling to cope with what they’ve been through, and discovering that their distant war has followed them home.

Virtues of War has the advantage of featuring lots of action sequences which Coles delivers with reasonable gusto. Ghosts of War, however, features far too many dinner parties and lengthy digressions in which not much happens. The second book is supposed to make the reader ponder the price soldiers pay for war, but Coles handle neither human emotions nor ethics convincingly.

I had a number of problems with these books. The way they handle women, whose worth seems intimately linked to their physical attractiveness and the divide between white characters (the protagonists) and non-white (villains or sexual trophies) are both disturbing. There are problems with the plotting, too, which is heavily reliant on everyone being egregiously stupid – warships without defences against boarding and secretly constructed routes to and from enemy territory that are left undefended and unmonitored in times of war, for example.

But the most obvious question these books raise is: How should we react to books whose lead character is a war criminal?

In the opening pages of The Virtues of War, Katja Emmes leads her team on a raid to a small farming community, part of the human colony on a planet orbiting Sirius, believing it might harbour terrorists. When the local village leader, a man called Thapa, fails to immediately answer her questions, Katja blows the head off an innocent man, pour encourager les autres. Later, after Thapa leads a revolt against Earth (which, to be fair, includes brutal murder and a threat to have Katja repeatedly raped in a public square) she murders him while he is an unarmed and helpless prisoner. She leads a raid that destroys civilian homes, calling down devastating orbital strikes on inhabited areas and, later, she executes an officer in her own navy who is guilty of being a poor administrator. 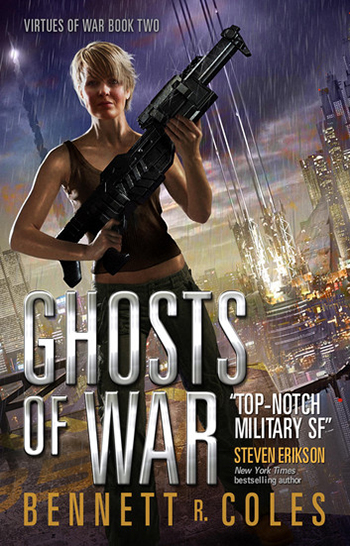 Coles makes use of bits of the philosophy of Thomas Hobbes throughout these books: the title of the first book comes from the claim in The Leviathan that “Force and fraud are in war the two cardinal virtues.” This sentence follows Hobbes’s description of a war of “every man against every man” in which no action is unjust: “notions of right and wrong, justice and injustice, have there no place. Where there is no common power, there is no law, where no law, no injustice.” In Ghosts of War, Katja’s commanding officer – Brigadier Korolev – absolves Katja of any wrongdoing in war using this defence. She did what was necessary in a situation where the rules of normal morality cannot be applied. And Coles goes further: for Hobbes individuals live under the protection of the sovereign (whether a monarch or assembly) and, in return, cede the right to question the sovereign’s actions. Earth’s government knows more than its citizens and, Korolev argues: “The people empower Parliament to act in the best interests of the State, and sometimes that means breaking the rules that rightly apply to the people” (256). Neither the rule of law nor petty morality apply to the state – or its agents, like Katja.

It is possible that Coles is playing with his reader. It is possible that the third instalment of the story will subvert all that has gone before and that Katja’s world, nasty, brutish and short as it is, will be turned on its head. Perhaps, in the end, the cruelty of the system she serves will be revealed to her (and to the reader) as an abomination. I have my doubts. But even if that were the case, there is no rescuing these books. Coles is too enamoured with his hero and her violence, he wants us to like her and to be on her side even as Katja is cold-bloodedly murdering innocent people. More than that, especially in Ghosts of War, he wants us to feel sorry for Katja – as if she is a victim. As if she, as an individual, has no moral responsibility for the crimes she commits. Even if the state’s actions were ultimately shown to be unconscionable her position as a subservient agent absolves her of wrongdoing. I couldn’t swallow it. Military veterans may deserve respect for their service but “just obeying orders” – even if coated in a veneer of Seventeenth Century philosophy – is no carte blanche.

How should we react to books whose lead character is a war criminal? With a distinct sense of queasiness.

This review was first published in The BSFA Review No.4, Summer 2018.

This entry was posted in Other reviews, Review and tagged 2018, bsfa, BSFA Review, sf. Bookmark the permalink.