The latest issue (no. 3) of the BSFA Review is out, and it contains my review of Alastair Reynolds’ Aurora Rising (previously released as The Prefect). This is a slightly extended version. 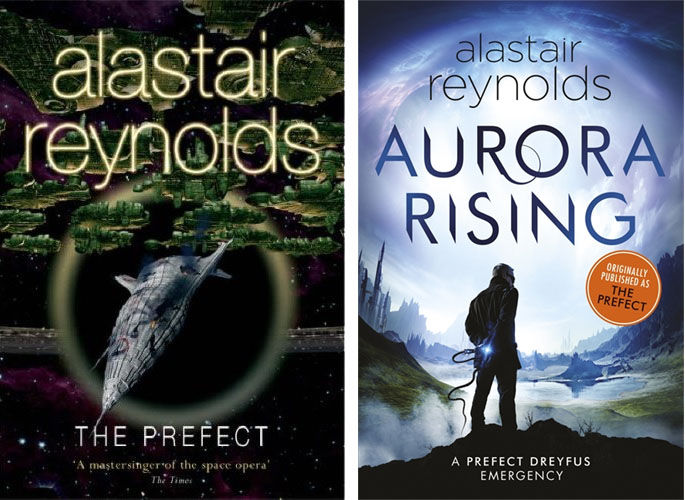 I jumped into the ebook of Alastair Reynolds’ Aurora Rising without glancing at the cover or paying any attention to any publicity or even the blurb on the back. I then spent the first fifty or sixty pages with a steadily growing concern that this was all a bit familiar. So, it was a relief, when I finally checked, to realise that Aurora Rising isn’t a new book, it’s a new edition of The Prefect (first published in 2007). It has been re-released ahead of a sequel, Elysium Fire, which is coming in 2018. To be fair to the publisher (and author) this is made clear on the cover, so this confusion was not their fault, it was mine.

However, despite feeling a bit foolish, it was interesting to return to a book I first read ten years ago. I remember quite clearly looking forward to the release of The Prefect. It marked a return by Reynolds to the universe created in Revelation Space for the first time since 2003’s Absolution Gap. Reynolds’ first four novels remain, for me, one of the most impressive achievements of British space opera and while I’d liked the two novels Reynolds had published in between (Pushing Ice and Century Rain) I was, fannishly, keen to return to the familiar.

Ten years on, my recollections of Aurora Rising/The Prefect was a little vague. I remembered some details vividly: the cool whiphounds – the Panoply’s multi-purpose weapon of choice; the crucifixion of a Conjoiner captain on the hull of his doomed spaceship; and the distinctly unlikely way one of the characters escapes from a siege inside an orbital habitat in a giant hamster ball. I had a less firm grasp on the details of the plot, a detective story that starts with the investigation of the destruction of a single orbital habitat and the murder of 960 citizens and quickly expands into an even bigger threat. Prefect Dreyfus uncovers a plot to take control of The Glitter Band – a collection of ten thousand semi-autonomous habitats orbiting the planet Yellowstone. He reveals multiple conspiracies within the Panoply, the closest thing anarcho-liberal The Glitter Band has to a police force, he battles one rogue artificial intelligence, Aurora, that is determined to protect her own existence at any cost and he solves the riddle of the Clocksmith, a tortured AI that went on a killing spree more than a decade earlier.

I remember liking, but not loving, Aurora Rising/The Prefect on first reading. I suspect, on reflection, that I was expecting a book that had the vast scale of previous Revelation Space outings and this is a more contained book. Also, I think, that in books such as Chasm City I had created for myself a vision of The Glitter Band before its harrowing that was grander and weirder and more complex than it was possible for this prequel to deliver. But then, from this distance, I can concede that it was probably impossible that any book could meet my expectations.

On rereading Aurora Rising I feel that my first impressions didn’t pay sufficient attention to what is good about this book. I am, most of all, struck by how much fun I had on my return. The plot moves quickly and builds intriguingly, unpeeling layers of deception and mixing in regular doses of set-piece action. I found Dreyfus far more engaging this time around – perhaps because I have gotten closer to him in age. I am now a lot more sympathetic to his grumpy impatience with the foolishness of others. But also in my first reading I missed how much Reynolds plays around with the novel’s central philosophical question: How much freedom should a society surrender to ensure its safety?

Dreyfus is rigid in his adherence to the rule of law and to the need to abide by the decisions of the democratic institutions the Panoply was created to protect. Aurora, however, has predicted that a crisis is coming that will destroy The Glitter Band. Her spy within the Panoply argues that freedoms are worthless if they allow civilisation’s destruction. Allowing Aurora’s superior intellect to keep everyone safe, even if it means abandoning democracy, is a price well worth paying. This argument – between freedom and security – is familiar to the point of cliché and regularly exhumed in a world where fear of terrorism and rising extremism are stressing our polities to the point of exhaustion. But what makes this novel more nuanced and more interesting – and what I think I missed fifteen years ago – is, first, Reynolds has let us know that the bad guys are right: The Glitter Band is doomed. We’ve seen in the earlier Revelation Space books that The Glitter Band will be destroyed and that it is at least plausible that Auroa could have saved it and its citizens from the coming cataclysm – even if at a price. And, second, in a side plot Dreyfus’s deputy, Thalia Ng, is forced to abandon the niceties of democracy and become a dictator to rescue a small band of survivors from a crisis created by Aurora’s plan.

But if the argument for security is given a hearing, the notion of benign dictatorship is soon undercut. Aurora is only really concerned with her own safety and her attempted coup quickly becomes a mass slaughter. Meanwhile, in battling Aurora, the leaders of the Panoply are also forced to make some difficult decisions, balancing the lives of some citizens against the chance of saving others, that can’t help but make the reader uncomfortable. As the Panoply stretches the limits of their authority and then, as the crisis unfolds, exceeds them, it becomes clear

Unlike most science fiction novels that rehash the argument about freedom and security, Reynolds avoids crudely simplistic responses. The reader is left in no doubt whose side they should be on – Prefect Dreyfus may be an inflexible curmudgeon but he’s where our sympathies naturally rest and his dedication to his cause is admirable.

I got much more out of Aurora Rising the second time around. Alastair Reynolds has steadily become an even stronger writer over the last decade and his recent books – The Poseidon’s Children trilogy and last year’s young adult novel Revenger – are amongst his strongest works. Having returned, once again, to The Glitter Band I am looking forward to going back to the Revelation Space universe in Elysium Fire, though hopefully with a clearer-eyed set of expectations. The next adventure of Prefect Dreyfus can’t come soon enough.