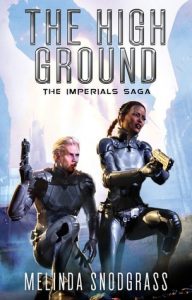 When I was a child I loved the breakfast cereal Ready Brek – instant porridge whose television advertisements used to feature a young boy protected from the winter elements by a warm glow of healthy goodness. I would eat Ready Brek for breakfast, supper and, basically, whenever I could persuade someone to give me a bowl. If I’d had my way I might have eaten nothing but Ready Brek. Recently, in a moment of nostalgic weakness, I thought I’d revisit my childhood obsession and made myself a bowl. I’m not sure what my seven-year-old-self saw in the stuff, but I can tell you that I was left wondering why anyone would eat this flavourless, textureless, pap.

Melinda Snodgrass’s The High Ground is a lot like Ready Brek – easy to consume and familiar but also bland and unappealing. Unlike Ready Brek this book does not leave the reader with a warm, protective glow.

The back cover of this volume introduces Snodgrass as an acclaimed novelist and noted scriptwriter on Star Trek: The Next Generation. This is the first time I’ve come across her work but she has written with George RR Martin in the Wild Cards series and her novel Circuit (published in 1986 – the first of a trilogy) was nominated for a Prometheus Award.

The High Ground is the first (of five) in a new series (The Imperials Saga) in which humanity has largely abandoned the environmentally ravaged, over-heated Earth. Beyond our own solar system we have encountered and conquered a variety of alien species to establish a “Solar Empire” which has existed for long enough that it has begun to slip into decadence, if not yet decline. The emperor of this confection has a problem – a family full of daughters but a genetic inability to produce a male heir that (perhaps improbably) this society’s advanced sciences seem incapable of curing. The emperor’s solution is to break with tradition and appoint Mercedes, his eldest daughter as his heir. But, to claim the throne, Mercedes must prove her fitness to lead by becoming the first young woman to attend and graduate from the empire’s elite military college, the titular High Ground, set in a vast station orbiting the imperial throneworld, Ouranos.

Meanwhile, Thracius (Tracy) is the bright son of an impoverished tailor who has – much to his dismay – been awarded a scholarship to The High Ground. Tracy’s position as an intitulado – a student from outside the aristocracy – is not unique but his low-born status attracts scorn and maltreatment.

Despite being sold as a “space opera” almost all of this novel (barring a brief prologue and a final action sequence) is a tepid school-based romance that weakly rehashes material that will be familiar from a host of more dynamic and more engagingly and elegantly written young-adult novels. There might have been some mileage in a story that sought to talk about expectations of gender and class in a rigidly structured society, but this is not this book. The “politics” of The Imperials Saga go no deeper than the average Hollywood high school teen romance and the plot unfolds with exactly the same sense of cloying inevitability. Mercedes and Tracy are, of course, bound to fall in love – though their difference in station means their love “must never be”. And, of course, both have misadventures due to their atypical status – forced to fight the prejudice and ignorance of others and the expectations of their society.

The major problem with The High Ground is that for around 350 pages nothing interesting happens and it doesn’t happen in very familiar ways. It’s very hard to care for a pair of protagonists who, despite the supposed obstacles placed in their paths, are so obviously and unquestionably destined to succeed. Mercedes may worry about whether she’s pretty enough or capable enough, but it is immediately clear that, of course, she’s really beautiful and, of course, her practical competence will be rewarded. Tracy might suffer from regularly-spaced bouts of insecurity but he’s also obviously destined for greatness and bound to outshine all of his higher-born classmates. That’s just the kind of novel this is.

Beyond the two lead characters, the book is full of insipid and wafer-thin cut outs. None of these people seem to have a life that extends beyond their relationships with the leads and none of them are destined serve any purpose beyond helping Mercedes and Tracy learn important lessons about themselves. This solar empire may extend to distant stars, but it has no depth

As for the plot – what there is of it – there’s not a single line or paragraph or page in the book that makes the reader doubt that it is going to deviate from a well-worn and regularly signposted path. Fifty or so pages from the end of the book a half-baked plot against Mercedes is revealed and there is some brief action but it’s unaffecting and what little tension is generated is quickly dissipated. The schemers of the imperial court are, frankly, blithering idiots and their plots have all unnecessarily silly complexity of a hackneyed comic book villain. Perhaps, as The Imperials Saga develops and extends itself into the wider universe Snodgrass has created, the story will gather pace and become more engaging, but the signs are not good – the aliens seem neither more interesting nor better defined than their human counterparts.

Snodgrass’s writing is polished to a glassy smoothness throughout, there’s no doubting her professionalism. The downside of this, however, is that so many rough edges have been removed that every feature that might snag the reader’s attention has been worn away. The text is it is easy to consume, certainly, but it also lacks anything to chew on, any real flavour or anything that would make you want to go back and consume some more: just like Ready Brek.

A shorter version of this review was originally published in The BSFA Review #2, January 2018.

P.S. If you are a fan of football (the proper, non-American kind), then one of the genuine “highlights” of The High Ground is a description of a game of “soccer” that is mind-blowingly wrong. Snodgrass’s description of the game is written as though not only has she never seen a game of soccer, but the person who described soccer to her had not only never seen a game either but had only read about it in a book that was written in a language that they only partly understood. It’s ludicrous… Anyway, there are no blockers in proper football.