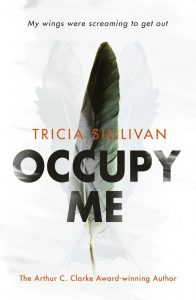 The overwhelming sensation left at the end of Tricia Sullivan’s strange, awkward, new novel is of things straining and stretching and struggling to be free. This is true of the characters, all of whom seem to be constantly pushing against something literal and/or metaphorical, but also true of the book itself – it feels as though the story, the very fabric of the book is stretching and struggling to contain itself. There’s so much packed in here, and at such conflicting, awkward angles, that it’s as though the paperback covers might, at any moment, tear themselves asunder and the whole lot will flop, exhausted and spoilt, on to the floor. That Sullivan juggles it all so deftly, so that disaster is not just avoided but that a sort of triumph is delivered, is to her great credit. But, for the reader, I have to confess, the journey was not always comfortable.

At one level this is a straightforward book – a nowish/near-futurish thriller in which money and oil and intrigue lead characters around the world from exotic locales to, well, Edinburgh. Pace Industries, a rapacious oil company, is trying to recover stolen money and a mysterious briefcase.  The briefcase is in the possession Dr Sorle, the physician who cared for the former oil executive, financier and embezzler – Austen Stevens. But Sorle is also – it quickly emerges – something much stranger than that. And, behind all the thriller elements, driving itself to the surface through the book’s thin skin, is a story about time travel, a giant flying dinosaur, alien birds whose habits include collecting the “waveforms” of the lost, entropy, the end of the universe and Pearl, the lost angel.

Normally, at this point in a review, it is customary to provide a brief summary of the plot of the novel under consideration. That is very difficult with Occupy Me. At its heart is Pearl, an “angel” with wings that fold into higher dimensions and an urge to mend people. Pearl works for the “Resistance” – a group of time-travellers pushing against mankind’s destiny, straining through small acts of kindness, we believe, to nudge humanity into a better future. But neither they nor Pearl know exactly who or what she is and there is distrust and confusion and, as noted, a lot of pushing and shoving and straining to understand.

Structurally, I found Occupy Me hard going for the first third and, I admit, I put the book down several times and resisted picking it up again. The opening sections are choppy, quite hard to follow and the story takes some time to begin to cohere – the struggle is clear but the purpose of all that grunting and shoving isn’t and I became frustrated with the book.

It is possible that, if I had not been sent this book to review, I might never have finished it. But, if I had walked away, I would have denied myself what becomes an intriguing, mind-expanding, often very funny and very effective science fiction thriller. The threads, at least most of them, pulled loose in the book’s opening do eventually weave themselves back together into a tapestry that isn’t just a recognisable representation of the world but a map that encompasses a complex and unstable multi-dimensional universe. This landscape tips and wobbles and pitches the reader across many plains of existence and yet still manages to dumps us, in the end, with a sense that we have been through something complete and understandable. It’s a very clever trick.

The fact that the novel does not shatter and scatter into incoherence is largely down to Sullivan’s success in creating engaging characters. Her protagonist, Pearl, is both a perplexing and frustrating puzzle and a rounded and convincing person – someone who the reader wants to succeed and whose story we want watch develop. Pearl, whose physical characteristics play with the iconography of angels, has parts missing and those parts have left a hole in her memory. Amnesia is an overused trope and I groaned slightly as it became clear that here was another hero with crucial blanks that can’t be filled until the plot demands it. But, actually, Sullivan does a rather good job in mixing things up so that the plot device doesn’t feel too familiar and the “reveal” – when we discover what Pearl is, where she came from and how she fits into the broader scheme of things – is so far out of leftfield that any accusation that this was just another retread of a Bourne-style thriller plot is left flopping helplessly like a hapless dinosaur in puddle of oil (possible spoiler there).

As the novel progresses it also gathers a memorable and intriguing a cast of supporting characters. Sorle was, and was not, scooped up half dead in Africa by Pace Industries and used as a poster boy for their “philanthropic” works. His detachment from his own culture – he was given a Western education and became a respected doctor – and his anger at the men and system that have pillaged his homeland, bringing war and disease, gives Occupy Me another layer of struggle and another layer of depth.

And then there is Alison, who I might have fallen slightly in love with. She’s a vet who – just when she believes her life’s ability to surprise had passed – grows into someone more confident and more capable and altogether more bad-ass then she ever expected. She’s a really nicely handled character and if her blossoming feels a touch unlikely, it’s one of the more pleasant stretches required by this book.

Occupy Me is not a book that grabbed me from the off. Reading it took work, it required me to give it the benefit of the doubt. In the end, though, it was a book that repaid my efforts handsomely. Once things started to click into place it accelerates quickly – the jumbled components of the opening coming together into a well-oiled and fast moving whole that offers both humour and excitement. It’s a memorable thriller, a mind-expanding lump of science fiction and, throughout, the writing is flecked with gemlike turns of phrase.

A book worth the struggle.

This entry was posted in Other reviews and tagged books, bsfa, review, reviews, science fiction, sf, Vector. Bookmark the permalink.

One Response to BOOK REVIEW: OCCUPY ME BY TRICIA SULLIVAN