A quick follow up to my last post. I’ve had people insist to me that it is perfectly valid to compare the latest local election results with the 2015 elections. So I want to make clear why this simply isn’t true.

Here are the results from the latest local elections presented in a map (see it in all it’s glory at Democratic Dashboard): 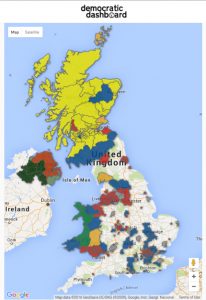 As you can see, there’s a lot of white space on this map. That’s because not everyone in the United Kingdom had the opportunity to vote in these elections.

That’s the main reason why trying to compare this election to the 2015 general election is silly. It’s different boundaries, a different electorate and, in places like Scotland and Wales, it’s even different electoral systems. It is, like your primary school teacher told you, wrong to try and add apples and oranges.

But the other thing it’s worth doing for Labour Party members (at least those who are genuinely interested in getting a clear view of where the party now stands and what we really need to do to win in 2020) is to look at those white spaces and think, for a minute about what kind of England they represent.

And if you can’t see what I’m getting at, compare those white spaces with the map of the 2015 general election.

See those broad swathes of blue that run across England from Cornwall to Kent, through the Midlands and East Anglia and all the way to Yorkshire?

Those are the places that didn’t vote last week.

So the 2016 local elections took place in places where Labour is traditionally strong. And, as Corbyn said, we held on. Just.

But we held on not because we did well – our share of the vote was (I’ll repeat) 7% down on the same elections in 2012 (worse in Scotland and Wales) and we secured just 31% of the vote overall – nowhere near enough to form a government. We avoided disaster not because we did well but because the Tories performed nearly as badly, dropping from 35% to 30% of the vote. But, in a general election, the Tories would have those vast, vast swathes of blue lining up behind them. And, without Scotland, to form a majority government Labour has to achieve a huge victory in England – something that looks further away than ever. 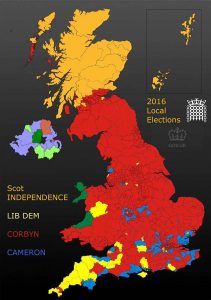 So, I’ll go back to the point of my last post: Labour members have a choice. They can lie to themselves, (spreading nonsense like the map on the left) to kid themselves that we are somehow storming to glorious victory. (It is worth noting the irony that many of the people spreading stuff like this weird misinformation are also attacking the BBC and mainstream media (MSM) for misrepresenting the facts about these elections.)

Or we can be honest with ourselves. We’ve lost significant ground and victory in 2020, always a pretty long shots, is now further away than ever. The strategy, whatever it was, that the current leadership have been pursuing isn’t connecting with the public. We’re doing worse than any Labour Party since 1985.

In a ludicrous local election poster, Labour told the British public that elections were about picking sides. Well if that’s true, then the British public looked at what we were offering and 70% of them chose someone else. This can’t go on. I hope that the bluster from McDonnell and Dugher about these results being a step forward is just that. I hope that someone, somewhere is responding to this failure with a reassessment of what we are trying to achieve, what messages we want the public to hear and how we deliver those messages.

I hope that’s true. But I have my doubts.

This entry was posted in Politics and tagged 2016, election, elections, Labour, Labour Party. Bookmark the permalink.