So, in my last post I responded to a post that claimed that there was a resurgence of Labour support identified in local election results. I thought I’d follow that up with a more detailed look at how things are going. 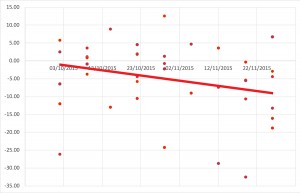 The chart above tracks the change in The Labour Party’s share of the vote in local authority by-election results since the beginning of October and the trendline marking the overall direction of travel.

The most recent results show a very definite decline in Labour’s electoral fortunes. This reflects some disappointing national polling and suggests that, brief and less impressive than his predecessors though it was, the Corbyn honeymoon period has come to noticeably swift conclusion.

No doubt everyone will have their own take on what’s causing the decline. For what it’s worth it seems to me that the left’s argument, that it’s all the fault of disloyal Labour MPs undermining the leadership, overestimates the amount of attention the public pay to internal party dialogue. I think there has been bloody awful news management by the current leadership team and some desperately stupid statements (and appointments) but there’s also a ridiculous hysteria surrounding everything Corbyn and his team does – he’s never going to get a fair hearing in most of the press – but we knew that when he was elected.

The news that the worse things get with the electorate the more popular that Corbyn becomes with Labour’s current membership does not at all surprise me. I said during the leadership election that the reaction that spawned Corbyn-mania wasn’t anything to do with politics and winning elections but that it was all about making a small section of activists feel better about themselves. That, I’m sad to say, appears to be exactly how things are playing.

The full details (taken from @BritainElects) are included below, in the interests of transparency.

This entry was posted in Politics and tagged 2015, elections, Labour, Politics. Bookmark the permalink.