REVIEW: THE BEES BY LALINE PAULL 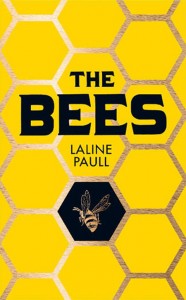 Why would an author write a story in which the main characters are bees? One reason might be simply that bees are interesting little creatures – fascinatingly social, successful, widespread and apocryphally busy – and we are intimately familiar with them. Their hives and lives offer the writer useful opportunities for allegory and metaphor. Or, perhaps, though we are familiar with bees their experiences are so entirely outside our own that they can also play the role of exotic aliens – seeing the same world as we do but in a radically different way. A third reason might be that as the bee struggles with environmental disruption – climate change, disease, pesticides – these little bugs offer the writer an opportunity to comment on humanity’s dysfunctional relationship with nature.

Laline Paull’s debut novel, The Bees, uses bits of all three of these elements, and part of its weakness is trying to do too much without being convincing about any one point, but it’s worth starting by discussing what the book does rather well. In imagining the bee society – dominated by females and with a central character driven by a powerful maternal instinct – this book’s most interesting aspect is the prominence it gives to the female view. The peculiar institutions of the hive are driven by sisterhoods and the central character’s concerns are distinctively womanly. Some reviews compare the book to Margaret Atwoods’ The Handmaid’s Tale and, while it’s a comparison which doesn’t do this slighter novel many favours, some resonances are clear.

But The Bees is only a partially successful novel. The plot is over familiar. A girl, born to low circumstances and living in a corrupt state that imposes rigid conformity upon its citizens, discovers that she has extraordinary powers. She travels through her society, magically excelling at everything she does, becoming embroiled in the machinations of the ruling elite and becoming the tool that smashes the existing equilibrium. Had Flora 717, the protagonist, been given a bow and arrows instead of wings and a stinger then she could very easily have dropped into this story from The Hunger Games. Flora’s hive often feels more like a Hollywood high school movie with the pretty girls in charge and competing for the attention of pomaded (the male bees actually wear pomade…) jocks who act like jerks. If a group of these bees had burst into a chorus of You’re the One That I Want” or Greased Lightnin’, I don’t think any reader would be entirely surprised. And, while Flora is well realised, the supporting characters are overly familiar, shallow, unmistakeably human and frequently buzz too close to caricature.

It is, however, the perverseness of taking a creature that is almost defined by their intensely social nature and using them to write a story of the primacy and ultimate triumph of the individual that is the most bewildering and disturbing element of this book. For much of the novel I kept expecting the other shoe to drop and for Paull to make some sort of point about the value of individual freedom versus the collective need, but if that’s her intention she does it in a rather odd way. Flora may overthrow the corrupt regime but she struggles simply to replace one sickly, but well-meaning, queen with another, more virile but violently ruthless one, who wrests control by force. Paull turns out not to be very interested in whether this is a good thing. Perhaps her point is that this is nature, the strong will prosper, but if that is what she wants us to think then it is a peculiar moment of ruthless realism in a book that plays fast and loose with other laws of nature.

Paull’s story is not one of revolution so much as it is one of individual exceptionalism, which is both a bit dull and a bit worrying. Dull because of the grinding inevitability of Flora’s triumph, she is magically brilliant at everything. Worrying because Flora’s superiority is revealed to be due to genetics, she is the product of the queen’s mating with “one of those fierce black wanderers from the far south”. The magical “half-breed” is an unpleasant cliché that I’d be happy never to read again and the genes-make-the-ruler idea made me deeply uncomfortable. And this sense of unease is made deeper by the way in which the actions of practically every character in the book are defined by what they are – wasps, bee castes, spiders and birds – all their behaviours rigidly conform to the fixed traits of their genetic programming. Only Flora, the uber-bee, appears to have agency.

Paull’s well-meaning but simplistic environmental message doesn’t help much. She relies on an almost childishly crude “man bad, nature good” dichotomy that is undermined by her simply getting things wrong. Crops sprayed with pesticide become a charnel ground:

“The earth was littered with bodies… a bloated mouse stared up with white eyes. Dead sparrows lay between the plant stalks, their beaks open and their tiny tongues dried grey. Between them were dead bees, countless numbers of them, and wasps, and flies, their bodies speckled with the pale grey film…” (115).

It’s a striking passage but it’s ridiculously overblown. Pesticides do damage animals of all kinds, but not like this, mammals and birds can be damaged but indirectly, for example. Nor, despite the Internet myth, are bees being confused, trapped and killed by mobile phone masts so that the ground is littered with hapless once-buzzing corpses, as Paull suggests.

The passage that (perhaps illogically) enraged me most is the moment when crows – those clever but lumbering carrion-eaters – are portrayed hunting bees on the wing, even snapping butterflies from the air as they pass. It seems preposterous that anyone that’s ever seen a crow (or a bee fly) could write down something like this, but there it is. The moment doesn’t matter in terms of the story being told, but it adds to the sense that this book, which puts so much emphasis on nature, has been written by someone who doesn’t have any deep connection to, or understanding of, the world she seems so concerned to save.

There are nice passages in The Bees and some interesting ideas – Paull’s writing is not irredeemable – but, fundamentally, I didn’t like the book. I didn’t like the Watership-Downing of these bugs, the flat supporting characters, or the lazy representation of nature. Our environment is important. Humanity needs to change a lot of the ways in which we interact with our planet, but I don’t see how it helps us to replace one set of wrongheaded ideas (man as the master) with another set of wrongheaded notions (animals are cute versions of us).

And so I come back to my initial question: Why would an author write a story in which the main characters are bees? Having finished this book I’m still not entirely sure that I understand what Paull hoped to deliver but, whatever it was, I don’t believe it has been achieved.

This entry was posted in Other reviews and tagged 2015, books, bsfa, review, reviews, Vector. Bookmark the permalink.

One Response to REVIEW: THE BEES BY LALINE PAULL