Reader, I have no answers to any of these questions. Indeed Dark Star is a riddle I have totally failed to solve. In many respects it is a very conventional novel. Its science fictional part – a human pioneer society gradually devolving on a strange planet – is every bit as familiar as its detective elements – a burnt out cop caught in a web of corruption that’s far above his pay grade. The setting is pleasingly peculiar – the story take place on Vox, a city on a world that circles a star that emits no light. Darkness presses in on all sides and this has created a society where light has become a conspicuous sign of wealth and privilege. There is an underclass, condemned to perpetual darkness, who are desperate, vaguely threatening, but ultimately helpless. This weirdness, however, is undercut by familiarity – the streets our protagonists (Virgil and Dante – I know, right?) walk are not alien, they have been worn smooth by the shoe leather of ten thousand hard-boiled shamuses who passed this way before. This rubbing together of the strangeness of place and the conventional familiarity of the detectives’ milieu – corrupt colleagues, dodgy dealing city officials and unworldly scientists – results in a whole that is an uneasy and not always satisfying compromise.

That’s not to say that the entire piece is entirely unsuccessful. Langmead plays with his light and dark world to conjure some occasionally startling images. If it’s not quite the chiaroscuro of the old masters, it is still often effective. The impact of the Prometheus drug is neatly imagined. And the moment of (literal) revelation at the story’s climax is a built around a series of affecting scenes. 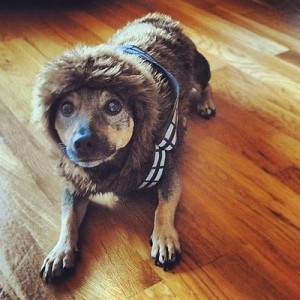 Dog, dressed as Chewbacca. Don’t do this to the ancestor of once proud wolves.

But then you have the form. I’ll confess my heart sank at the idea of two hundred pages of science fictional poetry. It seemed as ill-judged a decision as taking a perfectly respectable dog and dressing it up as Chewbacca. The first time you see a picture it seems cute, even mildly amusing. Then you look into the eyes of the dog – whether it is the smallest pug or some monstrous wolfhound – and you see pain and humiliation. And you remember, for a moment, that this poor, damned, thing had lupine ancestors roaming the steppes and terrorising every creature they met. It doesn’t matter how good the Chewbacca costume is, once you’ve looked into that puppy’s eyes it’s always going to change how you feel about the picture. So it is with this poem. At first it seems like a good trick, cute, even a bit funny. Then you look into its pages and you wonder if perhaps the proud ancestors of this beast might not look on what is being done to its progeny and feel a touch… miffed? Or at least slightly disappointed? Dark Star never quite overcomes the sense that the burdens of the past weigh heavily on its slim spine. The book isn’t quite squashed by these burdens but it does bend under the weight of never entirely triumphing in any of its constituent parts – and, particularly, I was never convinced by its poetry.

Indeed, one of the disappointments of Dark Star is that Langmead doesn’t make quite enough of his bold choice of form and doesn’t engage directly enough with the poetic traditions it invokes. Too often the words can zip by without making the impact that I hoped they would. It’s not that Dark Star is thoughtlessly written, but it’s too smoothed off – the words don’t poke the reader in the eye as often as they should. Too much of the weirdness of Dark Star is invested in the setting and not enough in the language. The text does not have the repetition or formulaic structures that my (limited) experience of epic poems led me to expect. Ultimately, Dark Star, a two-hundred- page poem just isn’t poetic enough, often enough.

All that said, it’s hard to be unkind to a book written with such preposterous ambition. Just having the idea, and the courage to make the idea real, gives author Langmead a significant degree of leeway. Honestly, how many two hundred page science fiction poems do you expect to be presented with in a single lifetime? As a detective story Dark Star is a reasonably engaging, unlikely tale and as a work of science fiction it’s got an interesting and imaginative setting. As a work of epic poetry it was neither quite epic nor quite poetic enough for me but, if Dark Star is no Iliad or Beowulf then Langmead is hardly the first author to fall short of that mark.

Dark Star by Oliver Langmead
(Unsung Stories, 2015)
A shorter version of this review was
originally published in VECTOR 281 (2015)

This entry was posted in Other reviews, Review and tagged 2015, books, bsfa, review, reviews, sf. Bookmark the permalink.