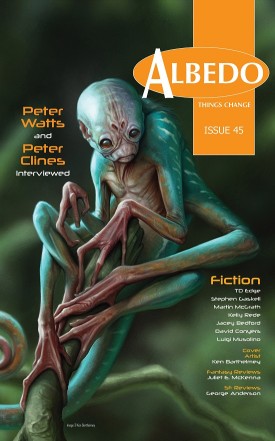 ed to be able to point you in the direction of the latest issue of Albedo One (no. 45 – available in ebook form from Smashwords and Amazon) which features my story, “King Rook”.

The story is one set in Northern Ireland in the mid-eighties and while none of the important stuff in the story is autobiographical, I really did grow up in a housing estate that was in the shadow of a rookery and it really was slowly sliding into a bog.

Anyway, as always when one of my stories is out there, I’m only too aware of its shortcomings and not about to suggest that my deathless prose will change your life but I would recommend that you pick up this (and every other) issue of Albedo One, it’s a very good magazine that deserves your support. And, at just a couple of pounds for the ebook version, it’s very reasonably priced.

I also realised that I haven’t mentioned on here that another of my stories, “And Dublin Wept”, was included in Pandemonium: Big Jim’s Shadow from Jurassic London. This is a flash story (just 750 words long) set in 1914 during the bitter industrial dispute that was the Dublin lock-out lead by the ITGWU You can get the book from Goodreads for free and for 77p from Amazon.

It felt a bit odd having this story in a collection dedicated to James Larkin, since the story pokes a some (gentle) fun at the trade unionist’s reputation as a great orator. It has as it’s central character a fictionalised version of William X O’Brien – a less celebrated figure in Irish labour history. The story is an alternate history that twists around the fact that Larkin at one point proposed sending the children of the strikers to E 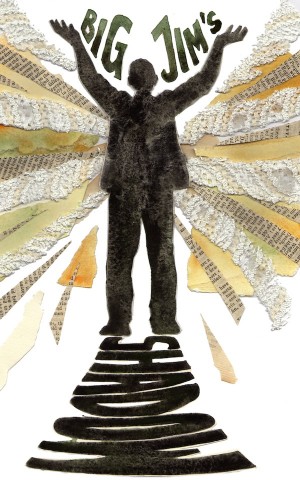 ngland and Scotland to live with the families of British trade union members. He hoped to ease the burdens on striking families but, more importantly, he hoped to spread support for the strike to the rest of the UK and thought the children would elicit sympathy. However, the combined forces of a hostile press and an equally hostile Catholic Church scuppered the idea.

The lock-out petered out in 1914, with both sides exhausted and forced to compromise. The ITGWU was badly damaged and things got worse when Larkin went off to North America and then, in 1916, James Connolly was killed by the British for his part in the Easter Rising (the leader of the bosses in the lock-out, William Martin Murphy, used his newspapers to agitate for the execution of his old adversary).

William X O’Brien was the man who rebuilt the ITGWU, turning it into a major force in Irish politics. There are songs about Larkin and Connolly but, as far as I know, no songs have been written about William X O’Brien.

The story also features a mention of the SS Connemara, a ferry that plied the route from Greenore to Liverpool. The ship did sink in Carlingford Lough, but not until November 1916. All aboard the real SS Conemara were lost, including my great uncle, Private Robert Kenna, who was returning to the war in France after recovering from injuries.

This entry was posted in Blogging, Writing news and tagged 2015, reviews, Writing. Bookmark the permalink.