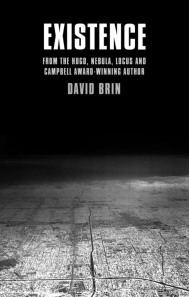 I did not like David Brin’s Existence. It is a book so distressingly unpleasant that it left me wondering – and this is no exaggeration – whether I had had enough of the whole of science fiction. I suppose you might say it caused something of an Existential crisis.

Boiled down to its basics, Brin’s novel is simple enough. An astronaut finds an alien artefact that immediately begins to attempt to communicate with humanity. Once the first artefact is discovered it is soon clear that Earth, indeed the whole solar system, is infested with these crystals – all containing the personalities of many different alien ambassadors, all offering radically different advice to humanity and many intent on destroying every other crystal they can reach. The overall message, however, becomes obvious. The Fermi Paradox – the fact that the sky is not ringing with the sound of thousands of alien races – is a result of the fundamental fragility of advanced civilisation. They have failed to solve the problems and threats posed by growing complexity and we probably will too. Brin weaves this basic story through a bewildering variety of, sometimes only marginally, interconnected threads.

There are many, many things wrong with Existence.

There’s the dully functional prose that reduces Brin’s world to an insipid flatness. Whether it’s struggling inside a doomed zeppelin, chatting with dolphins in an undersea base, creeping through the secret passages in an aristocrat’s mansion, or being chased through the teeming streets of Shanghai, Brin can find time for endless exposition but little or none for concrete detail. He relies, instead, on the fact that his readers will be familiar with these stock settings from a thousand other works. There’s something almost painfully apt in the way that the final passages of the book take place within one of the messenger crystals, in an environment that is blandly featureless: “An expanse of cloudy shapes spread in all directions… Light came from all directions… and none. Up and down, apparently, were only suggestions.” Existence is often utterly befogged.

Then there’s the hopeless structure. Existence is cobbled together from bits and pieces Brin has published elsewhere, the earliest elements dating back to 1998, and it shows. Threads of stories that run through the first half of the novel (intelligent dolphins, hunted Chinamen, an autistic cult) are simply discarded as the material runs out. By the final quarter of the book, Brin is skipping freely about in time and space as if he became increasingly bored with the story and decided to get the bothersome nonsense finished with all possible haste. In the opening sections Brin uses interludes between every chapter to give a flavour of a complex world beyond the scope of his book in a style similar to that employed John Brunner in Stand on Zanzibar. By the end, however, the pretence of using these interludes to expand the scope of this novel is cast aside and, instead, Brin uses them to shovel in lumps of plot exposition in an effort to hump the book over the finishing line.

These things contribute to Existence being a bad book but they are not the reason why I loathe it.

In the pompous afterword to the novel, Brin talks about coming to turns with and finding ways of nurturing humanity’s “newfound taste for diversity [that] is growing into fascination with the strange, even alien” and, almost the last words in the novel are a call for humankind’s diverse talents to be applied to the task of getting us safely through our collective “adolescence” and on to the stars: “It would take combining maturity with perpetual youthfulness—being joyfully ready for anything! Agility. And care. And work. From all of us, she thought.”

Brin is right, of course, we will need all our talents to survive the challenges we’ve constructed for ourselves, but this book demonstrates that he has little idea what diversity actually means.

Existence brings together men and women of all colours, super-smart dolphins, reborn Neanderthals, functioning autistic savants, aliens, cyborgs and enhanced intelligences. Beneath the characters’ superficial diversity, however, Brin systematically drives out every trace of difference from the “crew” of explorers he assembles. Hamish Brookeman, whose entire career has been built on undermining the influence of science to protect the interests of the rich, undergoes a dramatic (off-screen) conversion to the cause of reason. The ludicrous caricature, Professor Noozone, drops his Jamaican patois and adopts a more suitable image: “Now he resembled a real professor—tweed jacket, turtleneck shirt, and milder dreadlocks. Even spectacles. His affected accent was nearly gone” (My emphasis.) Even the gay astronaut, Gerald Livingstone, turns out only to have needed a woman who persisted in her pursuit of him and refused to accept “Gerald’s ‘inclination’ excuses, till at last he agreed they’d be lovers” to set him straight. The agency-free Chinese peasants disappear while the thoroughly Westernised scientist Emily Tang comes to the fore.

Existence starts in a world that has been reshaped by climate change and class conflict and massive inequalities are reinforced by an improbable political structure. Rather than exploring the consequences of this conflict, Brin simply wishes it all away: because conflict implies differences of opinion and differences of opinion imply that there are alternative, competing, visions of what a good society or a better future might look like. Brin, deeply invested as he is in narrow scientific rationalism and human (for which read American) exceptionalism and manifest destiny, simply cannot abide the notion that these views might have equal weight to his own. Convictions – religious, ideological or political – that don’t fit are edited out. Even the aliens, some supposedly veterans of thousands of first contacts, are easily undone by honest Yankee ingenuity and their agendas reshaped to serve humanity’s bidding.

This is a very peculiar notion of diversity.

Brin’s book is full of ideas – every gizmo and gimmick and special effect in the sfnal arsenal is thrown at the reader in a blur of world building – and that’s what I found most disturbing. Here, in Existence, is the entire science fiction fireworks display and yet behind the flashes and bangs is a fundamentally dishonest book that pretends to cherish diversity but only accommodates bland homogeneity and cannot tolerate the challenge of competing ideas. Beyond the dull prose, crude stereotypes and bodged structure there’s something profoundly wrong with Existence – something rotten.

Existence by David Brin (Orbit, 2012)
This review originally appeared in Vector No. 273

This entry was posted in Other reviews, Review and tagged 2013, books, review, reviews, sf, Vector. Bookmark the permalink.