DEREK JACOBI, SHAKESPEARE, THE EARL OF OXFORD AND CLASS WAR 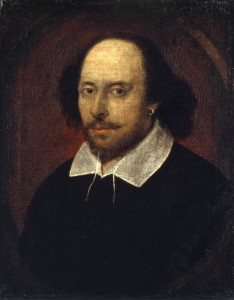 So last night I finally got around to watching Richard II, the first play in the Hollow Crown season currently running on BBC One. It was, I thought, a very strong production of what is quite a difficult play – lacking as it does an easily sympathetic protagonist and realistically portraying politics as a complex, knotty and morally uncertain business – which fails to provide anything that resembles a satisfyingly neat plot arc. Still, I enjoyed it and if you haven’t seen it yet, I recommend it.

Then I made the mistake of watching the accompanying documentary in which Derek Jacobi discussed the play. For the most part this was an interesting show, though perhaps it skewed too often towards the perspective of actors rather than talking to people who knew anything about the history of the era of either Richard or Shakespeare, or any real insight into politics. However it was spoiled, for me, by the ten minute diversion into the realms of Shakespeare-denial. I hadn’t realised that Jacobi was an “Oxfordian” – someone who believes that Shakespeare didn’t write the plays and attributes the works to John de Vere, 17th Earl of Oxford.

For the most part I put Shakespeare-deniers in the same category as UFO nuts and conspiracy-theorists who believe that NASA faked the Moon landings or that the Illuminati killed JFK with a death-ray. They’re vaguely annoying but their arguments are so patently daft that they’re not worth engaging with.

However, being forced to sit through Jacobi’s burblings, in which he was joined by some toff descendent of de Vere, the thing that struck me most forcefully (and annoyed me most profoundly) was their casual certainty that a man from Shakespeare’s “modest” background couldn’t have written plays of such quality or complexity and could not have understood the workings of the court or possessed an insight into the mind of kings. Shakespeare was, simply, too much of an oik.

I’m sure there are plenty of stupid flaws in the Oxfordian argument but it is the class-based argument that annoys me most, consisting as it does of ugly snobbery and assumptions of privilege. I deeply dislike the idea that it is, somehow, self-evident that only a lord could produce great plays or poetry. It is both pernicious and demonstrably nonsense.

Shakespeare (b. 1564) was son of a successful businessman, his father was a glover. He comes from exactly the same sort of background as many contemporary Elizabethan playwrights and poets. For example:

The main difference between Shakespeare and many of these writers was that they received a university education. Shakespeare attended a good grammar school which we know taught Latin using the classics but, where people like Marlowe and Greene then went on to university, Shakespeare, aged 18, married the older and (probably) already pregnant Anne Hathaway in 1585 and disappears from the historical record for several years. Sometime in this period he went to London and established himself as an actor, theatre impresario and, despite what the Oxfordians claim, playwright.

The first reference we have to Shakespeare as a playwright is Robert Greene’s attack on him – parodying his writing and calling him an “upstart” in 1592.  We might take this as an attack on Shakespeare’s lack of university education – Greene was one of the “university wits” with Marlowe and the rest. 1 It seems more likely, however, that it was Shakespeare’s status as a “Johannes Factotum” (Jack-of-all-trades – actor and theatre manager as well as playwright) that annoyed Greene most. In any case, his main concern seems not to be Shakespeare’s upbringing or class but his “bombast” and his belief that, he was “in his own conceit the only Shake-scene in a country”. Anyway, Shakespeare was not the only major playwright of his time who didn’t attended university. Ben Johnson received a good schooling but was then, on his own account, apprenticed to a trade (possibly bricklaying) before serving as a soldier. The lack of a formal higher education does not seem to have held back Johnson’s career as a dramatist either. There appears to be nothing in the man from Stratford’s history that marks him out as being radically different from most of the other writers plying their trade in Elizabethan England.

Of Shakespeare’s other contemporaries few were high-born. John Fletcher (b. 1579), with whom Shakespeare may have collaborated on some of his later plays, was the son of a Bishop while Thomas Lodge (b. 1558) was the second son of a former Lord Mayor of London. And this raises another obvious question. The Oxfordians argue that only the copious gifts showered upon the English aristocracy in this period (education, good breeding, leisure time, the ability to visit foreign lands, wealth, access to court) could provide the unique foundations necessary to create the works of staggering genius (and occasional stumbling mediocrity) we attribute to Shakespeare. But if this is true, where are all the other aristocratic geniuses of drama, verse and prose? Shakespeare and many of his contemporaries are plainly of a class – the product of ambitious, professional men who valued the opportunities education offered their sons. Where is the similar cadre of successful playwrights and poets who were the sons of dukes and earls? Are we to believe that they were all secretly beavering away behind the names of middle-class oiks – that Ben Johnson’s plays were written by Derby, that Christopher Marlowe was the nom-de-plume of Queen Mary?

What really annoys me about the Oxfordian argument as put forward by Jacobi isn’t so much that they want to credit someone else with the authorship of this group of plays. In the greater scheme of things it doesn’t really matter who first put all those words on paper so much as it matters that we actually have those words. The real problem with this argument is that it is based on a toadying notion that the aristocracy are inherently superior – that it is obvious that the privileged contribute more to society than the rest of us. Does this sound familiar? It should, because it’s precisely the same attitude that reinforces the notion that chief executives and bankers deserve every penny of the cash that’s poured into their bank accounts because their contribution is naturally more valuable than ours and to suggest otherwise is the product of ignorance or base jealously. But, with art as with business, the supposedly vast contribution of the elite is a mirage.

The most casual glance through history shows that despite – or perhaps because of – their privilege and their opportunities, great art rarely emerges from the elite (though I conceded they have often funded its creation through their patronage). Despite the Oxfordian claim that Shakespeare’s background make his achievements incredible it would actually be much more unusual if work of the quality of King Lear or Hamlet had emerged from the pen of a man of de Vere’s background.

This entry was posted in Blogging and tagged books, fiction, Politics. Bookmark the permalink.

7 Responses to DEREK JACOBI, SHAKESPEARE, THE EARL OF OXFORD AND CLASS WAR