This piece was written as part of the BSFA’s Vector Reviewers’ Poll for 2011. Vector reviewers get to nominate their five favourite books of the previous year. In 2011 my five were: 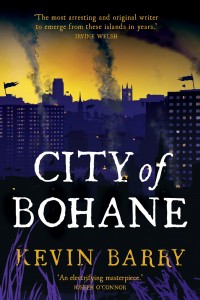 I chose to focus on just one of them. I picked Kevin Barry’s City of Bohane primarily because I expected there would be plenty of other people smarter than me to heap praise on the other books I’d chosen…

The thing that strikes me about my list of favourite books of 2011 is that none of them come from the genre ‘core’. This is unusual for me. Adam Roberts’s By Light Alone probably comes closest to being a straightforward science fiction novel but, being by Adam Roberts, it’s anything but straightforward. If I had to recommend one book from 2011, though, it would be Kevin Barry’s City Of Bohane, which just edges out Chris Priest’s brilliant The Islanders.

Although City Of Bohane turns around a gangster – Logan Hartnett, the Long Fella – as he struggles to overcome a series of threats to his position at the top of Bohane’s criminal underground, it is the city that dominates the book. Bound on one side by the grim, grey expanse of the wind-lashed Atlantic and, on the other, by the equally untamed Big Nothin’, Bohane deserves to rank amongst the most distinctive and most thrilling creations in fantasy’s prolific tradition of founding cities. The Bohane River, tainting the air, flows slow and thick past the feral Northside Rises, beneath the gentrified Beau View into Smoketown and the narrow alleys of the Black Trace, home territory of the Long Fella’s gang, the Hartnett Fancy, and on to docks and the great ocean.

Onto these streets Barry drops a cast of strikingly memorable characters. Hartnett battles with the women in his life: his scheming old mother, Girly; his increasingly estranged wife, Macu; and the lithe, ambitious Jenni Ching. He gets little help from his muscle, the hapless Fucker Burke with his Alsatian, Angelina, and the easily-led Wolfie Stanner. And then there are the external threats from the Cusacks, a Northside tribe bent on vengeance, the dangerous “Sand-pikeys” and, above all, Hartnett’s nemesis, The Gant Broderick, back after 25 years across the water and a man of uncertain intentions.

But the best thing about City Of Bohane is Barry’s writing, thick with slang and as flashy and arresting as the costumes in which his characters parade through Bohane town:

“A pale green suit, slim-cut, of thin spring cotton, a pair of burnt-orange arsekickers with a pronounced, bulbous toe, a ruffle-fronted silver shirt open at the neck, a purple neckscarf, a pallor of magnificently wasted elegance, and his hair this season swept back from the forehead and worn slightly longer, so that it trailed past the ruff of his jacket. Also, a three-day stubble. Was the Long Fella’s opinion that, if anything, his suffering made him even more gauntly beautiful. He had all the handsome poignancy of heartbreak.”

Barry has as created a novel that is both a futuristic vision of Ireland, wrecked and wasted, and a book that is nostalgic, redolent of the mythic Irish west. It is frequently laugh-out-loud funny and yet its cruelty is honed to a sharp point. It is, by turns, maddeningly erratic and spectacularly assured. It is also Barry’s first novel and proves him “a slugger of a young dude and as smart as a hatful of snakes.”