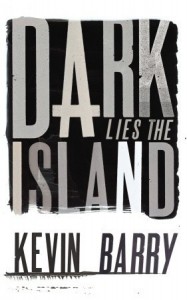 Dark Lies the Island (Jonathan Cape, 2012) is Kevin Barry’s second collection of short stories, following There are Little Kingdoms (2007) and his spectacular first novel, City of Bohane (2011). Given the long and rich history of Irish writers exploiting the short form, from the roots of the Irish oral storytelling tradition through the unavoidable James Joyce to the post-war Cork school, new writers are burdened with a weight of history that has the potential to crush flat their ability to express themselves. So when I say that Barry isn’t just a spearcarrier in that tradition but that he takes it forward and finds new ways of expressing himself within it, I’m aware that I’m ramping up the expectations to very high levels.

There are, of course, ways in which Barry’s short fiction reflects those that have gone before. You can, by turns, find in Barry’s writing those moments of epiphany, the concern with those struggling to stay afloat on the edges of our society and the flashes of humour that mark out the best of the Irish tradition (Joyce, O’Connor and Ó Faoláin, respectively), but Barry has a voice that is also distinctly his own. Not the least of his advantages is that he can offer a sometimes bitter reflection on the all-to-brief brush with economic good fortune that marks Ireland’s recent past as dramatically distinct from its deeper history.

The stories inThere are Little Kingdoms were notable for their frequent wanderings into the realms of the speculative. That tendency is less apparent in Dark Lies the Island, though “Fjord of Killary” might be read as a story of particularly damp, particularly Irish, apocalypse and two other pieces (“Ernestine and Kit” and the title story) do stroll casually towards the edge of the horror genre and look into the abyss with steely eyes. The continuities between the two collections are better reflected in the shared focus on the Irish west and its natives, the concern with the marginalised and those struggling to hold it together, the black-as-tar but often laugh-out-loud humour and flashing revelations that the author might be a frustrated, but not (yet) bitter, romantic.

There are a number of recurring themes in the stories of this collection. There is a certain cruelty in Barry’s merciless dissection of human frailty and failure, rambling excursions that lead to some kind of insight and a constant return to people whose minds have been twisted or torn by the sharp edges of modern society.

Some of my favourite stories in the collection include:

This is the story of a happy marriage but before you throw up and turn the page let me say that it will end with my face pressed hard into the cold metal of the Volvo’s bonnet, my hands cuffed behind my back, and my rights droned into my ear – this will occur in the car park of a big-box retail unit on the Naas Road in Dublin.

“Wifey Redux” may be my favourite story in this collection and it forms a fine companion to “Animal Needs”,  my favourite story in There are Little Kingdoms – both stories deal with middle-aged men driven to desperation and the edge of madness by sexual desire and both are wickedly funny. “Wifey Redux” is the story of Jonathan Predergast whose utterly unreliable narration gradually reveals a man falling apart as the things that he thought were sufficient to ensure his happiness – his wife, daughter and the wealth accumulated during the good times – betray him. The catalyst for the crumbling of Jonathan’s life is the blundering intrusion of the bulk of Aodhan McAdam, the first serious boyfriend of his adored seventeen-year-old daughter, the beautiful, spoilt, Ellie. Barry cleverly deconstructs Jonathan’s life, unpeeling the layers of self-delusion that underlie his claim to be telling the story of a “happy marriage” and breaking him down until the final, promised, unavoidable showdown in the car park of a DIY store. But it is the surprise run-in with a giant exclamation mark that makes clear that Barry isn’t just mocking Jonathan, there’s an empathy and, indeed, a sympathy for a man for whom every material comfort can’t protect him from the riptides that threaten to drag him from the safe harbour he believes he inhabits.

So I bought an old hotel on the fjord of Killary It was set hard by the harbour wall, with Mweelrea mountain across the water, and disgracefully grey skies above. It rained two hundred and eighty-seven days of the year, and the locals were given to magnificent mood swings.

A blocked poet seeks escape, and perhaps inspiration, by buying an old hotel on the west coast on the shores of Ireland’s only natural fjord. He finds himself trapped with the locals (and their obsession with the distances between random points on the map) and his (at-it-like-bunnies-on-Viagra) Belarusians staff. As the rain falls, the animals flee and the waters rise alarmingly, cutting the hotel’s inhabitants off from the rest of the world and threatening apocalypse, there is only one response: a disco, complete with Bryan Adam’s classic “The Summer of ‘69”. And, somewhere in all that, the poet finds a moment of release and a lifting of the “gloom of youth” that reignites his talent. “Fjord of Killary” demonstrates Barry’s cruel ear for the banality and crudeness of “his people” and yet, at the same time, there’s a forgiveness in the writing. You laugh at these people but it is also easy to recognise yourself in their ramblings and their small interests and Barry’s poet, for all his literary pretensions, his references to Thackeray and his belief in his own superiority over his fellow inmates, is no less trapped in narrow, repeating circles than they are.

It was a pig of a day, as hot as we’d had, and we were down to our T-shirts taking off from Lime Street. This was a sight to behold. – we were all of us biggish lads. It was the Ale Club’s July outing, a Saturday, and we’d had word of several good houses to be found in Llandudno.

Another beautifully observed story of male hopelessness and of the opportunities for love narrowly missed. And real ale fans. And trains.

Two ladies in their sixties made ground through north County Sligo in a neat Japanese car. The sky above Lough Gill was deep blue and the world was fat on the blood of summer.

Ernestine and Kit, the two ladies in their neat car, are not your average day-trippers, out enjoying the historic sites of the west. They are snobs, quick with their judgements on the imagined failings of the young women they pass and, it gradually becomes clear, they are also something far more disturbing. They are something horrifying. They are predators. The ending of this story is brutal and unblinking.

Camden High Street, Sunday morning, 11a.m. He stood with Manus by the elevator in the tube station as the crowds rose up in a great surge of bodies and voices.

The only story in the collection that deals directly with The Troubles – the central character is Stephen who has been recruited to the IRA and is in London planning to plant a bomb. “The Mainland Campaign” is the most difficult and morally ambiguous story in Dark Lies the Island. Barry’s handling of Stephen is interesting and troubling. Stephen is an outsider, finding acceptance amongst others on society’s fringes – the goths, punks and the rest of those who contributed to Camden Market’s peculiar character. He goes to clubs, meets a girl and begins to fall in love and imagines a future. And yet he is also able to dispassionately watch crowds of his peers and imagine planting a bomb that will blow them to pieces.

We are given a brief insight into Stephen’s childhood – growing up in a “broken home” on a Tipperary estate, listening to his mother having sex with “nordys” brought to stay with them by Manus. These are IRA men, presumably, on the run from the British. It reveals Stephen as a young man with no direct connection with Northern Ireland and gives no hint that he possesses any emotional or political attachment to the “cause” for which he is willing to kill. The nearest we get to Stephen’s beliefs is his statement that:

’Ireland is magical,’ he said. ‘England is ironical.’

And yet this is such an empty, silly, statement – tossed out to impress a girl – that it is hard to credit that Stephen can seriously believe it. And it is even harder to believe that this might drive a man to mass murder. Especially since he is far more at home with the other flotsam of London society than he ever was in Tipperary.

But, it seems to me, this disaffected, disconnected character is more typical of the kind of young men who become involved in terrorist groups than the foaming-at-the-mouth ideologues that feature in popular imagination. It isn’t the banality of Stephen’s evil that is so shocking so much as it is the absolute absence of it.

She sat in a pool of grey-blue light thrown by the screen. Beyond the high windows, it was darkening, the quick fade of an October day. She had not cut in nine days but maybe tonight.

Sara is a smart but troubled young girl with a history of mental illness. She has escaped her wealthy, broken family by taking up residence in the far-flung Irish west in their modern, stylish, sharp-edged holiday home. Struggling with the urge to cut herself and a slow internet connection, haunted by visions that linger on the edge of her consciousness and bearing the weight of the expectations of her online “peers”, Sara is in conflict with her distant parents and her own instincts. Barry uses the dark, blasted West to great effect as the environment presses in on Sara and reflects back her black mood. But “Dark Lies the Island” finishes on an unusually hopeful note as Sara finds untapped resources to resist the self-destructive impulses that lurk within.

This entry was posted in Blog reviews and tagged books, review, reviews. Bookmark the permalink.