FRIDAY’S WORDS OF WISDOM: A COUNTRY IS NOT A COMPANY BY PAUL KRUGMAN 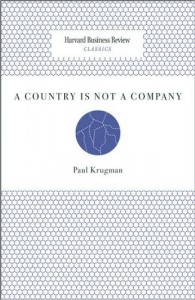 A Country is Not a Company by Paul Krugman, (Harvard Business School Classics, 2009) is a brief essay that highlights the fallacy behind the notion that success in business automatically provides individuals with the insight necessary contribute advice towards the management of a national economy.

A country is not a big corporation. The habits of mind that make a great business leader are not, in general, those that make a great economic analyst; an executive who has made $1 billion is rarely the right person to turn to for advice about a $6 trillion economy. Why should that be pointed out? After all neither businesspeople nor economists are usually very good poets, but so what? Yet many people (not least successful business executives themselves) believe that someone who has made a personal fortune will know how to make an entire nation more prosperous. In fact, his or her advice is often disastrously misguided. (1-2)

Krugman makes the point that the style of thinking necessary for success in business and success in economic policy-making are very different. He offers two examples of how the experience of running a successful business can actually lead people astray when they come to think about running national economies. First he looks at the relationship between exports and jobs and, second, at the relationship between foreign investment and trade balances.

Businesspeople tend to support free trade and believe it supports greater global employment. Businesspeople also tend to believe that nations are in constant competition for the jobs created by free trade. So, businesspeople believe, that the more a nation exports the more people it will employ and, conversely, the more it imports the fewer jobs will be available. This has the ring of a common sense truism and it often repeated in political debate.

However, economists in general do not believe that free trade creates more jobs worldwide (or that its benefits should be measured in terms of job creation) or that countries that are highly successful exporters will have lower unemployment than those that run trade deficits. (6)

And within nations, the constraint on the number of jobs isn’t the level of demand. Governments can generate booms – they can print money, cut interest rates – but they don’t, because they believe

the result would be unacceptable and accelerating inflation. In other words the constraint on the number of jobs… [is not]… the economy’s ability to generate demand, from exports or any other source, but the level of unemployment that the [government] thinks the economy needs in order to keep inflation under control. (8)

Investment and the trade balance

If a country receives a sudden influx of foreign investment, because foreign businesses have decided it is a good place to set up factories, business executives believe “almost without exception” that the country will start to run trade surpluses. In their experience, running a company, increased capacity leads to fewer imports (and more exports) and, played out across a whole economy this should, surely, mean trade surpluses. But economists believe, to the contrary, that such a country “will necessarily run large trade deficits.” (13)

The balance of trade is part of the balance of payments and in any nation the difference between sales and purchases from foreigners must be zero. A country can run trade deficits or surpluses but imbalances in trade must always be matched by imbalances in the capital account. Countries with trade deficits must sell more assets to foreigners than they buy, a country with a surplus must be a net investor abroad. Inward investment sparks demand for imports which leads either to an increase in the value of the country’s currency or increased inflation (depending on whether the currency’s value is floating or fixed). Under either scenario the goods produced by the country will be priced out of export markets and encourage an increase in imports. “Whatever the channel, the outcome for the trade balance is not in doubt: capital inflows must lead to trade deficits.” (16)

On issues such as exports and jobs and investment and trade, why is there a disconnect between the understanding of economists and the expectations of business people?

“The Parable of the Paralyzed Centipede”

Success in business is not built by developing general theories of the corporation but by finding particular products and strategies or organizational innovations that generate increased profits and by perceiving opportunities before anyone else. This is often an intuitive skill rather than relying on formal rules, and trying to codify it can actually be harmful leading them to act how they think they should rather than how they did when they were having success. (Krugman cites the joke about the centipede who was asked about how he coordinated so many legs and, when he started to think about it, could never walk again.) Even so, why isn’t the advice of practical people with practical business experience, useful?

Because, in short, a country is not a large company. Many people have trouble grasping the difference in complexity between even the largest business and a national economy. The US economy employs 120 million people, about 200 times as many as General Motors, the largest employer in the United States. Yet even this 200-to-1 ratio vastly understates the difference in complexity… A mathematician will tell us that the number of potential interactions among a large group of people is proportional to the square of their number… the US economy is in some sense not hundreds but tens of thousands of times more complex than the biggest corporation. (23-24)

And, while most corporations are not very diverse in their make-up, nations consist of wide varieties of “lines of business” (many of them in direct competition) that are united only by existing within common geographical boundaries. Unlike businesses a

national economy must be run on the basis of general principles, not particular strategies… But many businesspeople have trouble accepting the relatively hands-off role of a wise economic policymaker. Business executives must be proactive. It is hard for someone used to that role to realize how much more difficult – and less necessary – this approach is for national economic policy.(25-27)

Going back to school

Scientists recognise “great man’s disease” in which an expert in one field develops and espouses opinions about another field that she or he does not understand – businesspeople who find themselves acting as policy advisers often have the same problem. They struggle to recognise that their experience and skills do not simply transfer across from private business to public policy.

The general principles on which an economy must be run are different – not harder to understand, but different – from those that apply to a business. An executive who is thoroughly comfortable with business accounting does not automatically know how to read national income accounts, which measure different things and use different concepts. Personnel management and labour law are not the same thing; neither are corporate financial control and monetary policy. A business leader who wants to become an economic manager or expert must learn a new vocabulary and set of concepts… (30-31)

This can be hard for the successful businessperson to accept. They can dismiss the economic words and concepts as jargon but they may simply be failing to understand the fundamental difference between businesses and national economies. Business tend to be open systems, national economies are, even allowing for international trade, overwhelmingly closed.

Businesses – even very large corporations – are generally open systems. They can, for example, increase employment in all their divisions simultaneously; they can increase investment across the board; they can seek a higher share of all their markets. Admittedly the orders of an organization are not wide open. A company may find it difficult to expand rapidly because it cannot attract suitable workers fast enough or because it is unable to raise enough capital. An organisation may find it even more difficult to contract because it is reluctant to fire good employees. But we find nothing remarkable in a corporation whose market share doubles or halves in just a few years. (36-37)

It is not possible for a national economy, particularly a large one like the USA to expand in this way. Most US employment and “value-added” (70%) is in industries who do not export and do not face import competition (retail trade, for example) so increase in market share by one US company in this area must mean a fall in market share for another. And, as we have seen, even if a national economy becomes substantially more successful in securing shares of international markets, trade surpluses must be accompanied by the export of capital.

Businesspeople have trouble with economic analysis because they are accustomed to thinking about open systems. To return to our two examples, a businessperson looks at the jobs directly created by exports and sees those as the most important part of the story. He or she may acknowledge that higher employment leads to higher interest rates, but this seems an iffy, marginal concern. What the economist sees, however, is that employment is a closed system: Workers who gain jobs from increased exports… must gain these positions at someone else’s expenses.
And what about the effect of foreign investment on trade balance? Again the business executive looks at the direct effect of investment on competition in a particular industry; the effects of capital flows on exchange rates, prices, and so on do not seem particularly reliable or important. The economist knows however that the balance of payments is a closed system: The inflow of capital is always matched by the trade deficit, so any increase in that inflow must lead to an increase in that deficit. (39-40)

Feedbacks in business and economics

For a business, success in one area can help it expand in other areas.

…a company that does well in one area may end up hiring more people in other areas. But an economy that produces and sells many goods will normally find negative feedbacks among economic sectors: Expansion of one industry pulls resources of capital and labour away from other industries. (45-46)

What’s a President to Do?

There needs to be clarity about what businesspeople can actually offer as advisors.

Economics is a difficult and technical subject. It is no harder to be a good economist than it is to be a good business executive. (In fact, it is probably easier, because the completion is less intense.) However economics and business are not the same subject, and mastery of one does not ensure comprehension, let alone mastery, of the other. A successful business leader is no more likely to be an expert on economics than on military strategy.
The next time you hear businesspeople propounding their views about the economy, ask yourself, Have they taken the time to study this subject? Have they read what the experts write? If not, never mind how successful they have been in business. Ignore them, because they probably have no idea what they are talking about. (50)

This entry was posted in Friday Words of Wisdom and tagged books, economics, friday wisdom, Politics. Bookmark the permalink.