SOMETIMES IT REALLY IS ROCKET SCIENCE 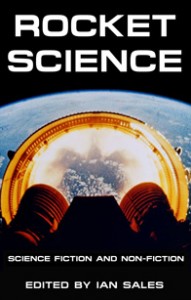 I have in my clammy little paws my contributor copy of Rocket Science, the new anthology from Mutation Press, edited by the estimable Ian Sales. This fine looking volume of short stories and non-fiction features my tale of a (sort of) Mars mission, “Pathfinders”.

The seeds of ‘Pathfinders’ came to me from a couple of lectures that were put on by the BFI as part of their Kosmos retrospective on Russian science fiction films. The first was in a comment by Simon Ings about the fundamental differences in Russian and American approaches to exploration and their national psychology. He suggested that the Russian attitude to space exploration can be traced, in part, to that nation’s geography. The Russian experience of attempting to expand into Siberia was a war of attrition and nature was never truly conquered while the American expansion west encountered a, generally, more benign landscape and engendered a pioneer spirit that favoured a gung-ho attitude.

And then I spent an afternoon listening to the Russian cosmonaut, Sergei Kirkalev, talk about his experiences aboard the Mir space station as the Soviet Union fell apart on the planet below him and his later career training Russia’s cosmonaut cadre. Kirkalev had an extraordinary grace, charm and composure. I found him very impressive and I tried to capture some of that as I introduced a character loosely based on him in ‘Pathfinders’.

When, not long afterwards, I read Ian’s pitch for Rocket Science, it set me thinking about the reality of the modern space programme in economically straitened times and all these threads came together to form the shape of the story.

So far I’ve read the first two stories in the Rocket Science – Leigh Kimmel’s “Tell Me A Story” and Stephen Gaskell’s “Fisher’s Gambit”  – and they’re both very good. I feel like I’m in fine company (and hope I haven’t let the side down).

The book is being launched tomorrow (Sunday) at Eastercon at noon and I’m on a panel at 3:00 on “The Science of Rocket Science” – which should be fun. You can buy the book from the Interzone table in the Dealers’ Room if you’re at Eastercon or it is available from all good bookshops – and a few rubbish ones.

One Response to SOMETIMES IT REALLY IS ROCKET SCIENCE