BOOK REVIEW: IN THE MOUTH OF THE WHALE 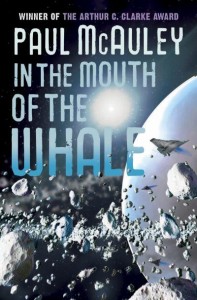 I always have more than one book on the go at any given time.  There is always one novel and one work of non-fiction work (usually something on politics, history or economics) on the go. Actually, I’m usually part way through several works of non-fiction at any given time and, when I commuted, I was always reading two novels (one paperback for the train, one hardback for home). Since I’m not travelling regularly into London any more, however, these days it tends to be just one novel. Added to that, I read comics (or graphic novels, or whatever) and  subscribe to at least two dozen magazines.

I’m not saying you this to brag about how much I read – actually it’s a stupid habit since I’d be far better off concentrating on one thing at a time, but I lack that discipline.

This is all by way of setting a context. I can usually tell how much I enjoyed a novel by how many other things I’ve finished reading while working my way through to the end. Very rarely, maybe six times a year, a book drags me in and I don’t even glance at anything else until I’ve turned the final page. More commonly I’ll finish a novel in about a week and read another non-fiction book and perhaps a graphic novel and half a dozen magazines in the same period. And sometimes, when a novel is complex or when it just doesn’t grab me, it’ll take me a couple of weeks and I’ll read a lot of other stuff.

It took me four weeks to finish Paul McAuley’s In the Mouth of the Whale. I finished two other novels, a stack of non-fiction books and a dozen graphic novels… And it wasn’t because it was a particularly complex novel  or particularly long – it’s less than 400 pages from cover to cover.

I like Paul McAuley’s work. Fairyland is a very fine book, so is White Devils and Cowboy Angels, and I loved the first book in this series, The Quiet War, so, although I had problems with his last novel (the second book in this series) Gardens of the Sun[i], I approached In the Mouth of the Whale with great optimism. For me McAuley sits in that (too rarely struck) sweet spot for the traditional form of science fiction where often excellent writing meets serious scientific speculation. McAuley produces finely wrought sentences, he picks his words, he constructs atmosphere, he can build characters with complex psyches and he does all this while writing “proper” science fiction with spaceships and neatly constructed future science. There’s an obvious intelligence at work in his writing and he treats his readers with respect, demanding that they work for their pleasure but frequently repaying them handsomely.

For the most part, these admirable qualities remain on display in In the Mouth of the Whale – there are passages that are wonderfully evocative, the people in his story have motivations and consistently constructed characterisation and the scientific detail (though neither as prominently on display nor quite as startlingly inventive as in the earlier books in this series) contains a rich thread of imaginative speculation.

In the Mouth of the Whale is constructed around three story threads. One features what appears, at first, to be the story of one of the protagonists of the earlier books in the series, Sri Hong Owen, as she grows up in a nearish-future Brazil. The other two stories untangle themselves in the midst of a war in the distant Formhault system. The True, unenhanced humans, dominate this system but the Ghosts, a human off-shoot that have developed a sort of hive-mind, want access to the gas giant Cthuga and the vast mind that, they believe, inhabits the core and will allow them to change history and make them the dominant branch of humanity. In between these two foes are the Quick, enhanced humans who first colonised the Formhault system but whose devotion to high-level intelligence and abstract thought made them vulnerable to the True, who exploited their weakness, robbed them of their enhanced capacities and bred them to be slaves.

Against this background McAuley tells the story of Isak and Horse and Ori.

Isak is a high-bred True, a disgraced member of a clan devoted to rebuilding the ancient knowledge of Earth that was lost when the Quick’s libraries were badly damaged by the war, and Horse is his Quick companion. Isak is given the chance for redemption when he is given a mission to find the scion of the Singleton clan who has disappeared after discovering potentially vital information – the quest leads Isak and Horse across the Formhault system to a discovery that will change the course of the war.

Ori is a Quick. She is a servant aboard The Whale, a vast station that orbits within the clouds of Cthuga. A strange vision that comes to her during an attack on the station changes her life, she becomes the subject in an experiment to contact the mind at the heart of the planet, becomes intimately involved in the war and finds a liberation from the servitude that she was, literally, bred to endure.

I found the first half of In the Mouth of the Whale particularly tough going. The individual threads felt slow to get up to speed but, crucially (for me), I just didn’t have enough of a sense in the first two hundred pages of where the book was going, how these threads were linked and why I was supposed to care about the events these characters were experiencing. It wasn’t clear to me what was at stake or why any of it mattered. I had particular difficulty with the section on the childhood of Sri Hong Owen. While there were interesting ideas here, and I think there’s lots of good stuff to be mined from this version of a future, environmentally-wracked Brazil, I never felt that there was enough movement in these sections of the book and my reading tended to grind to a halt in these early chapters.

Pacing, for me, was a problem, but so too were the characters. I don’t need a book to give me characters that I like or even feel empathy with, but I do need to feel as though I’m engaging with them, that they are revealing themselves to me somehow. I found McAuley’s writing is a little too cool and distant in this respect. All the characters are terribly self-contained, their emotions strongly in check, their sang is too unremittingly froid so that even when terrible things happen (Ori suffers many indignities, including being raped) there’s remains a sense of disconnectedness that worked against my feeling the events as powerfully as I think I should. Perhaps this was because my other problems with the book prevented me from immersing myself in the story, but I think that, at least in part, my reaction was a result of deliberate decisions by the author. McAuley’s uses a number of techniques (including addressing the reader directly) that seem determined to pull us out of the world he has constructed and keep readers at a distance. If this was his intention, I think it works against his book.

The pace (and my engagement with the book) picked up considerably in the second half – as plot threads finally begin to intertwine and the narrative develops a sense of purpose. Characters begin to unwind slightly too, revealing more of themselves to the reader – though there’s no sense in which this ever becomes a book in which emotions gush from the page. I certainly enjoyed this part of the book more (and read it much more quickly – getting through the last 170 pages in just three days).

I really wanted In the Mouth of the Whale to be great, but the process of reading was the very definition of a game of two halves. By the half-time oranges, which tasted more like lemons,  I had begun to worry that the problems would overwhelm the novel’s qualities and that I might end up hating the book, but the second half achieves some measure of redemption.

In the end, then, I liked the book – even when I was struggling to get through it, there was much to admire – but I couldn’t recommend it without significant reservations.

[i] I did review it on this blog, but the post got lost along with many others when an update of this site went dramatically wrong a couple of years ago. My main complaint was that I felt McAuley got bored with his cast of characters half way through and chucked many of them overboard. It is worth noting that In the Mouth of the Whale is set at some distance from the earlier two books and could, perfectly easily, be read as a standalone novel – though it does contain significant spoilers for the earlier books.