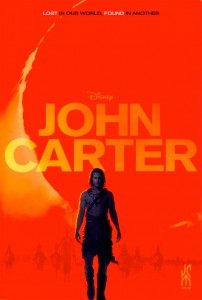 John Carter of Mars is going to go down in the history books as one of the biggest flops in cinema history . It might have been cheaper for Disney to actually build a pile of money and climb to Edgar Rice Burrough’s fabled Barsoom rather than make this film. The early reckoning is that the film will lose around $200 million – in simple cash terms, not allowing for inflation – that would make it the biggest flop in cinema history.

Which is notable, because while John Carter is dull – two long hours of unengaging piffle – it isn’t any more dull than a host of other blockbusters that justify their existence by raking back enough cash to keep the studio wheels turning.

There’s certainly nothing wrong with the talent working on the film – if one ignores the rather dull leads. Andrew Stanton’s Pixar films (A Bug’s Life, Finding Nemo, Wall-E) mark him out as a fine writer and film-maker and this piece is co-scripted by Pulitzer Prize-winning author Michael Chabon. The quality behind the words makes it all the more surprising that the final film is so poorly constructed – too many characters with too little motivation, too many lacunas and too much backtracking. There a long list of very good actors in the supporting cast though  – Samantha Morton, Willem Dafoe, Thomas Haden Church, Mark Strong, Dominic West, James Purefoy – who, even if they don’t all get to do an awful lot (and sometimes what they do get to do doesn’t seem to make any sense) give the film a solid foundation. The special effects are good. And there was no skimping on the promotional budget.

John Carter of Mars is not a good film, but it isn’t a disaster.  The reviews were tough – though not overwhelmingly bad (it scores a poor 51% on Rotten Tomatoes, with an average rating of 5.7 out of 10 with critics but some, like Roger Ebert, liked it on its own terms). And, while I was bored silly, the aggregate audience reaction has been rather more positive (it currently scores 7.1 on IMDB and 70% of viewers liked it on Rotten Tomatoes – rating it at 3.7 out of 5 – both are respectable marks).

But, crucially, in financial terms, it didn’t matter whether the film on screen was a masterpiece or a turkey because there wasn’t an audience for it.

Stanton/Disney’s decision not to cast a star with the capacity to “open” a movie was a brave move but I think it will come to be seen as a serious error. Blockbusters, especially when they tell stories as emotionally empty as John Carter of Mars, don’t often need brilliant acting in the lead role but they do need presence – they need charisma. Taylor Kitsch, who I like in Friday Night Lights, here delivers neither fine acting nor charisma as the eponymous hero. He’s a blank at the centre of the film and his name isn’t going to bring paying customers through the door – his family, presumably, will have got to see the film for free.  Lynn Collins (Dejah Thoris) is better in the female lead – brave, smart, occasionally funny – but it remains a limited performance which seems to involve an inordinate amount of voguing interspersed with a lot of gurning.

The biggest problem for John Carter of Mars, though, is that this was a film made by geeks, for geeks, without ever considering whether anyone else cared about what they were doing. Both Stanton and Chabon have confessed to being long-term fans of the Burroughs’ stories and it seems an awful lot of people making the decisions were blinded by an emotional attachment to the source material. My quick – and entirely unscientific – survey of some random people I know who aren’t fans of science fiction showed that while all of them had heard of Tarzan, none of them knew that John Carter existed before this movie came out (and some still hadn’t heard of him). These books might be cherished by a small group of fans who care about these things but there was no mass audience out there waiting for an adaptation, nor was there a general recognition of the property.

The history of the John Carter of Mars project stretches back a long way – sometime in the 2000s Harry Knowles (uber-geek at Ain’t It Cool News) was involved in an (unlinked) attempt to produce a film based on Burroughs’ Martian stories. His defence of John Carter of Mar is, I think, revealing:

I know, everybody and their brother has written article after article about JOHN CARTER’s box office death. The annoying part is that folks seem bent on blaming Andrew Stanton for this. Well, the film that ends with Directed by Andrew Stanton…   that film is pretty damn terrific. I absolutely hang this terrible performance on the marketing of the film. The movie was presented to the public with no context. No introduction to the genre significance and certainly very little sense of the true grandeur that Stanton had in his film.

Knowles includes a link to a fan-made trailer that starts with a slide show that informs the viewer how very important Burroughs’ stories were to the history of science fiction and then recuts the theatrical trailers, using slow motion and dramatic choral music, to drive home the film’s “significance”. The implication seems to be that people aren’t going to see the film because they don’t understand the place of John Carter in the history of the world of geek.

There’s something awful about this attitude – it stinks of a geekish sense of entitlement.  What Knowles, and the maker of the fan trailer and, I think, everyone who backed this movie are saying is that this thing matters to us, so it obviously matter to everyone else. The problem isn’t that geeks have made a film no one else cares about (regardless of whether it is actually any good). The problem is that ordinary people don’t understand it (us).

This is all, of course, nonsense. The public don’t owe it to a literary adaptation to educate themselves about its history before choosing what film to watch. If the literary importance of a story was the key to driving audiences to cinemas then the box office would be dominated by biblical epics and adaptations of Shakespeare and dead Russians. Nor do the public owe it to geeks to learn about, much less share, their fascinations and obsessions.

In the end John Carter of Mars is a mediocre film that not many people are going to see. It probably doesn’t deserve the box office hammering it received (when compared to some of the films that break even or make money) but nor does it deserve anything more. It is not a neglected classic. It is not misunderstood. It just isn’t much good.