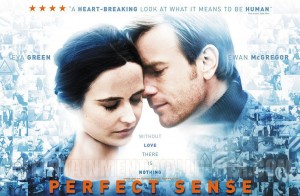 No one should go into director David Mackenzie’s Perfect Sense expecting a light-hearted romp. This apocalyptic romance is a slow-burn – despite packing four separate-but-linked disasters into a brief 88 minute. Its characters exist on the edge of the world (well, Glasgow) and can only watch and wait, essentially incapable of influencing the flow of events, as the end of civilisation creeps inexorably towards them. The film’s focus is not on impressive special effects or derring-do but on the emotional turmoil of a damaged couple.

Michael (Ewan McGregor) is a chef. He is also a selfish bastard. Susan (Eva Green) is an epidemiologist, who is similarly emotionally distant. They meet as the world starts to fall apart. People suffer emotional outbursts – first grief, next fear, then anger and finally euphoria – and following each outburst they lose a sense – smell, taste, hearing and then sight. The film isn’t interested in the scientific cause of the spreading disease, Susan’s role as an epidemiologist provides us just enough information to appreciate the hopelessness of it all. Nor is Mackenzie particularly interested in engaging with the unfolding drama, the action, such as it is, takes the form of what might as well be animated slideshows of moments of chaos from around the world with a sleepy voiceover supplying a slightly oblique narration. There are some street scenes of things falling apart in Glasgow that are quite effectively handled although the wandering horse, which I think was meant to be a striking image of things falling apart, garnered only an unintended laugh.

But none of this really matters, because what counts in Perfect Sense is whether the central characters make a connection with the viewer – whether we invest in their relationship and care about what happens to them. Mackenzie is aided here in two striking performances from McGregor and Green who make a handsome and interestingly flawed couple. However the film works hard to distance us from their characters. They are both self-confessed arseholes with a tendency to treat other people as objects. There is also an affected, tightly-repressed, distinctly middle class angst running through the film that hopes to appear profound but often teeters on the edge that abyss labelled “the gorge of po-faced self-importance”. Added to that is the film’s overwhelming sense of hopelessness, the way it revels in the inability of humanity to grapple with what is happening and the pitiless nature of the disaster that unfolds. It all means that a lot of people are not going to enjoy Perfect Sense. It is not a popcorn movie. It is not a crowd pleaser.

The film has other flaws. Adding a voiceover narration to a film is a dangerous thing. Sometimes it adds immensely to the atmosphere but, too often, a voiceover becomes a crutch for incapable storytelling or an outlet for a screenwriter’s unrestrained pomposity. In Perfect Sense the voiceover manages to be all these things. Green’s voice is sonorous and serious but there is a real sense that what she’s telling us is stuff that the writer and director couldn’t afford or couldn’t be bothered to film and there are times when the high-flown imagery of the words (which appears to have nothing to do with the character of Susan, who is utterly without such affectations) seems to have been dropped in from the sixth-form notebook of a particularly sensitive teenager.

And yet, despite all this, I find myself thinking that Perfect Sense is actually a rather wonderful film. Despite all the disasters, all the loss, all the helplessness, Mackenzie had created something that is surprisingly uplifting. Through all the chaos, life goes on. People find ways to continue to take pleasure in their lives. They continue, for the most part, to do their duty. They find ways to keep communicating and reaching out to each other. There is a danger that, if you look too closely, this film might actually appear optimistic about humanity and our base nature.

My reaction to Perfect Sense reminded me of why I used to listen to The Smith’s (back when I was, briefly, an angsty teenager myself and before Morrissey went totally batshit). There is, beneath all the misery and the two slightly horrible people having tastefully-lit sex in place of real emotional engagement, something like a Johnny Marr guitar riff in this film that transforms it into an artefact capable of raising hope rather than wallowing in despair. As the final disaster strikes – as people have a euphoric flash of common insight before blindness descends on the world “like a blow from a club” – it contain moments of simple joy. The lasting impressing is not the descending blackness but the moments of light.

Even here, though, Perfect Sense almost throws everything away. That ponderous narration returns in the final scenes, steadfastly attempting to strip away any wonder, intoning about how people receive a: “profound appreciation of what it means to be alive. A shared urge to reach out to one and other. To offer warmth, understanding, acceptance, forgiveness, love.” It’s almost as if the director and screenwriter have no faith in their actors, their images and the power of the story they are telling. Without that confidence they are reduced to screaming at the audience, in the crudest possible way, “THIS IS HOW YOU SHOULD FEEL!” and “THIS IS WHAT WE MEAN!” But the audience can see the joy in the actors’ performances. We can recognise the happiness on Susan and Michael’s face as they see each other for the final time. We can feel the tenderness. We have not been stripped of our senses.

So, Perfect Sense falls some way short of perfection but it is by no means a bad film. It is well-made, Mackenzie marshals his resources effectively, and features strong performances. It is ambitious enough to aim for something like emotional and intellectual depth. It is a science fiction film, though the publicity material contains all the necessary disclaimers about the utter absence of super-intelligent squid, spaceships and laser swords, and it was made in Britain and funded by BBC Films. Such things are rare, and Perfect Sense is certainly worth an hour and a half of your time.