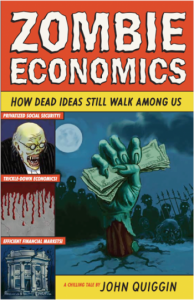 Despite the garish cover and silly title, John Quiggin’s Zombie Economics: How Dead Ideas Still Walk Among Us (Princeton University Press, 2010) is a book with a serious and timely intent – to rescue our societies from the disastrous effects of right-wing economic orthodoxy. Quiggin begins by quoting Keynes’ contention that practical men “are usually the slaves of some defunct economist” and that economists, philosophers and politicians tend to get stuck in patterns of thought that have long outlived their usefulness.

Ideas are long lived, often outliving their originators and taking new and different forms. Some ideas live on because they are useful. Others die and are forgotten. But even when they have proved themselves wrong and dangerous, ideas are very hard to kill. Even after the evidence seems to have killed them, they keep coming back. These ideas are neither alive nor dead; rather, as Paul Krugman has said, they are undead, or zombie ideas. (1)

Quiggin attacks five ideas that, he contends, played a crucial role in creating the conditions for the financial crisis that almost destroyed the world’s economy in 2008 and, at the very least, will be creating serious, damaging fallout for nations and their citizens for a generation to come. They are:

Taken together these ideas contributed to the ideology of “market liberalism” that has dominated economic theory and political policy since the early 1980s under the guise of Thatcherism or Reaganism or the Washington Consensus or neoliberalism. Each chapter of Zombie Economics takes one of these  ideas and looks at the history of their development or, as Quiggin has it, their birth, life, death and reanimation – demonstrating in each case how they contributed to the financial crisis and how their adherents are now attempting to rehabilitate them in the post-crash era.

The ideas that caused the crisis and were, at least briefly, laid to rest by it are already reviving and clawing their way through the soft earth. If we do not kill these zombie ideas once and for all, they will do even more harm than last time. (4)

Quiggin’s attack on these zombie ideas – essentially a restatement of traditional Keynesianism (with a renewed commitment to Keynes’ belief that government support for the economy during the tough times requires an equal determination to run surpluses during times of growth) – is detailed and convincing while the zombie motif is a (not always successful) way of trying to popularise sometimes complex economic ideas. But, actually, the most interesting thread running through Quiggin’s book is his critique of the modern discipline of economics itself. His attack on the dominance of the theory of Dynamic Stochastic General Equilibrium in economics papers is revealing. It yields, he says, a class of problems:

…of exactly the right degree of difficulty for academic economists. The problem is hard enough that solving it requires, and exhibits, the skills valued by the profession, but not so hard as to be insoluble, or soluble only by abandoning the framework of individual maximization… economists, as a group, had mistaken beauty clad in impressive-looking mathematics, for truth. (104-5)

Quiggin attacks market liberalism at its neoclassical foundations – the idea of perfect markets and unfailingly rational actors making fully-informed choices in pursuit of selfish interests that will, in aggregate, invariably deliver the best possible social outcomes. The problem is not so much that each of these assumptions has been, repeatedly, disproven by empirical studies of what actually happens in working economies. Each element in this construction is an abstraction. Models constructed from such abstractions have their uses but, in constructing policies, they should not be crudely substituted for reality. Time and again Quiggin explains how economists have looked on aghast as their work has been dumbed-down by followers or seen ideas designed as thought experiments applied with and uncritical literalness that distorts their original intent. To be a major economist, it appears, is to be betrayed by colleagues.

For many years economists have worked like the anecdotal drunk who searches for his dropped keys under a lamppost because the light is better there. In the future, and particularly in macroenomics, economists will need to look where the keys are and build tools that will improve the chances of success… We must model a world where people display multiple and substantial violations of the rationality assumptions of microeconomic theory and where markets depend not only on prices, preferences and profits but on complicated and poorly understood phenomena like trust and perceived fairness. (123-4)

Quiggin is, I think, convincing in both his basic assault on the underlying assumptions of market liberalism and in his concern that despite their thorough debunking, these zombie ideas still walk amongst us and that there is a significant body of opinion that wishes to see them re-established as guiding principles in a post-crash economic settlement.

As an alternative, Quiggin sets out a manifesto for a new way of doing economics in the twenty-first century. The field needs to focus more on realism, equity and humility and spend less time worrying about artificial rigour, efficiency and hubris.

The prevailing emphasis on mathematical and logical rigour has given economics an internal consistency that is missing in other social sciences. But there is little value in being consistently wrong. Economics must move on from the infinitely rational, farsighted and asocial beings whose decisions have been the central topic of analysis in recent decades. It will still be necessary to abstract from the messy complexity of human decision processes and focus on critical factors in decision-making. But the factors that are relevant in microeconomic analysis of goods markets may not be the same as those that matter in labour markets or in analysis of macroeconomic aggregates… it is time for the economics profession to display some humility. More than two centuries after Adam Smith, economists have to admit the force of Socrates’ observation that ‘the wisest man is he who knows that he knows nothing.’ While knowledge in the sense of absolute certainty may be unattainable, economists can contribute to a better understanding of the strengths and weaknesses of markets, firms and other forms of economic organisation, and the possibilities for policy action to yield improved economic and social outcomes.” (211)

While many on the right and left agitate for an ever smaller state, Quiggin makes the case for a mixed economy that recognises both the capacity of markets to deliver wealth and innovation in situations where there is genuine competition and for government where natural monopolies and long term investment make markets poor at delivering social needs. Most crucially, market liberalism has proven poor at managing risk – particularly in protecting people from the risks associated with deeply entrenched poverty.

The alternative, social democratic, program has to build on the idea that society shares and manages risk more effectively than individuals can achieve on their own. The policies that were traditionally associated with social democracy – the welfare state, the mixed economy, greater economic equality – can all, Quiggin argues, be recast as responses to the risks that individuals face in a complex economy. Inequality is a serious risk and social democrats need to return to a concern with equality of outcomes not just equality of opportunity.

Risk and inequality are closely linked. On the one hand, the greater the risks faced by individuals in the course of their lives, including the risk associated with differences in initial opportunities, the more unequal society is likely to be. On the other hand, as the financial crisis has shown, radical inequality in outcomes, such as that associated with massive rewards to financial traders, encourages risky behaviour. Inequality particularly encourages a search for opportunities to capture the benefits of risky actions while shifting the cost onto others, or onto society as a whole. (207)

From the chaos of the 1930s and the Second World War the era of social democratic governments created economies that were more equal, more stable and that allowed more social mobility. Using the tools created by Keynes and his followers, the mixed economies of this era rescued capitalism from the disastrous effects of gross inequalities and wild speculation. That this era ended in the instability of the mid-1970s does not negate its achievements. As Quiggin’s Zombie Economics sets out, market liberalism has led us to a disaster that is, by any measure, at least the equal of 1970s and it has done so while creating a society that loads more risk on the poorest, is significantly more prone to dangerous economic instability and has made societies less able to harness the talents of all their people by limiting social mobility.

A social democratic response to the crisis must begin by reasserting the crucial role of the state in risk management. If individuals are to have security of employment, income and wealth, governments must act to establish and enforce the necessary legal and economic framework. The fact that government is the ultimate risk manager justifies and necessitates action to mitigate inequalities in both opportunities and outcomes. Grotesque inequalities characterise unrestrained capitalism and were increasingly resurgent in the era of market liberalism. (208)

Zombie Economics is almost two years old. It was written at a time when governments were still pursuing policies to pump significant sums of money into their economies in an attempt to stave off the worst impacts of the financial crisis. It appeared that lessons had, at least amongst policymakers if not economists, been learned. Quiggin, therefore, was able to be relatively optimistic about the chances of finally killing off these undead ideas. Two years later, with Obama’s administration in full retreat from economic intervention and conservatives in power across Europe, the picture looks less hopeful. The thing about zombie films is that, despite the valiant efforts of their protagonists, the shambling, brain-eating monsters usually destroy civilisation. They win by sheer weight of numbers and a devoted pursuit of a simple, clear goal – the massacre of all those who get in their way. A paperback edition of Quiggin’s book is out later this year and it will contain an updated chapter dealing with recent developments. It will be interesting to see of the Australian economist remains hopeful.

This entry was posted in Blogging, Friday Words of Wisdom and tagged books, economics, friday wisdom, Politics. Bookmark the permalink.