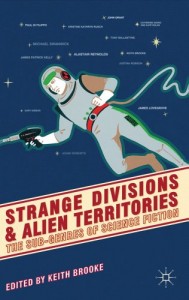 This week I read Strange Divisions & Alien Territories: The Sub-genres of Science Fiction (Palgrave Macmillan, 2012) edited by Keith Brookes. It’s a collection of essays that, the blurb on the back says:

explores the sub-genres of science fiction from the perspective of a range of top SF authors, combining a critical viewpoint with exploration of the challenges and opportunities facing authors working in SF today.

I can’t honestly say that the book fulfils that blurb. As with most collections the quality of the essays varies – although in Strange Divisions & Alien Territories that range is broader than most with some very good pieces and some that, well, just aren’t[i]. A few too many of the essays descend into long lists of books that fit into various categories, lacking any critical framework. And a number of the essays (indeed many of the better examples) deal with topics that don’t seem, to me, to represent a “sub-genre” by any definition of that term. Adam Roberts writes about religion and sf, Paul di Filippo discusses people possessing superhuman powers and Tony Ballantyne considers post-humans in SF – these essays are interesting, but they seem to me to be discussions of themes within SF, not sub-genres.

Quibbles aside, there are some thoughtful essays here. Alastair Reynolds, Justina Robson, Kristine Kathyrn Rusch, James Patrick Kelly and Keith Brookes all write very different essays – the brief for the book seems to have been interpreted quite loosely – but they offer interesting insights.

For me, though, the most thought provoking essay was Adam Roberts’ “Does God Need a Starship: Science Fiction and Religion.”[ii]

Roberts starts by rehearsing an argument that he made in his book The History of Science Fiction (2006) that “SF as a mode is intimately complicit with religion” arguing that:

At a basic level, religion is in the business of extrapolating elaborate and fantastical narratives out of reality, making them not only internally consistent and credible (as far as possible) but also beguiling, offering people magic and meaning, consolation and a sense of wonder lacking from the mundane. SF is in exactly the same business. (112)

Roberts concedes that those with religious beliefs, the vast majority of humanity, would disagree with this assessment – most particularly the “fantastical narratives” – but his intention is not Dawkinsinian hostility. Indeed, as we shall see, Roberts goal is the rescue of religion from its errors. This kind-hearted regard for the future of religion, offered by a self-confessed infidel, is unlikely to endear his analysis to believers but it is an unusual position.

The title of the piece comes from a moment in Star Trek: The Final Frontier [thanks Immano] when the crew of the Enterprise break through a wall at the centre of the galaxy to discover God, who then demands that Kirk hands over his ship, which prompt’s the captain to wonder: “Why would god need a starship?”

Since the number of points of theological doctrine upon which adherents of the world’s many religions can agree is vanishingly small, it is worth pausing to note that any person of faith will agree with the proposition: God does not need a starship. Omnipotence puts the entity beyond need, conflict or (from the point of view of the writer) dramatic interest. He makes poor copy… Perfect certainty is incompatible with the creation of effective works of art. (118)

Roberts then goes on to explore the later fiction of Philip K Dick, inspired by his peculiar religious visions, and in particular VALIS, which Roberts describes as “a novel of prodigious, almost heroic, tedium”. The banality of the religious revelation in VALIS does not, necessarily, mean that it is worthless. As Roberts argues the banality of a work like VALIS echoes the nature of religion itself – religious inspiration is not a rare miracle. Billions of people believe in god: “Devine revelation is, in fact, the most ordinary human thing of all.” (122)

Having considered how SF shares fundamental impulses with and has drawn inspiration from religion, Roberts then sets out how SF could repay that debt by offering religions a model that would allow it to escape from its greatesr flaws.

A problem with actual religion is the profound, structural difficulty it has shedding its own mistakes. In this respect at least, SF is simply better positioned. And this is the particular – relatively little discussed, it seems to me, but vital – upon which the future of religion hinges. This is why (to pick one example among many) homosexuality is such a crucial problematic for the big monotheisms at the moment. I take it as axiomatic that the condemnation of consensual homosexual sex, or of a homosexual orientation, is, simply, an error. The extent to which Christianity and Islam persist in this error is the index of a kind of conceptual pathology. Finding ways of moving religion past its mistakes may well be the great challenge of the age. Inerrant seems to me one of the most terrible terms of dispraise in the lexicon, though often taken otherwise. The concept religion could usefully take from its cultural offspring, SF, is: the retcon. (123-4)

I’m not sure that religion is quite as unfamiliar with the retcon as Roberts supposes. Most religions have a long history of reworking their central tenets to fit with changed circumstances and while it does not always follow that changed practices are accompanied by a public concession that past practice was “errant” they have often managed, through a process of creative double-think, to hold both old dogma and new reality in their teachings simultaneously. In some areas, some religions have shown a remarkable faculty to adapt their core ideas – the Catholic Church (having learned its lesson from Bruno and Galileo) has been very careful in the modern era not to paint itself into dogmatic corners regarding scientific discoveries, retrofitting, relatively painlessly, its official teachings to encompass theories such as “the big bang” and evolution.

It is, of course, possible to identify areas where religions have failed to move far enough or fast enough to keep up with the liberal transformation of society and Roberts is right that these “conceptual pathologies” are serious problems for both believers and sceptics. Equally problematic, sadly, is the fact that the ability of religions to retcon their beliefs has not just operated in a liberal direction in the modern era.

The purportedly literal readings of core texts that inspire today’s fundamentalist movements in various faiths are actually based on modern interpretations of texts that, far from representing a continuity of thought, involve a wholesale reimagining of doctrine and rewriting of history. These illiberal movements are often at odds with long dominant traditions within the faiths whose truths they claim to be upholding. They are frequently insurgent movements doing battle not just with the modern, liberal, world but with the elders of their own religions.

Sadly, I think, Roberts is wrong. Religion has a long and proven ability to retcon its own teachings, the problem is that the things they choose to retcon are not always those that liberal writers like Roberts (and I) would wish.

[i] One, in particular, annoyed me so much in its rambling vagueness, that this was nearly the first Friday’s Unwise Words… But calmer, more polite, heads prevailed.

[ii] Sometimes I worry that this blog will end up devoted solely to my stalking of Adam Roberts. It isn’t my fault that he keeps writing stuff that interests me.

3 Responses to FRIDAY’S WORDS OF WISDOM: ADAM ROBERTS “DOES GOD NEED A STARSHIP?”