HUGO AND OTHER NOSTALGIC MOVIES 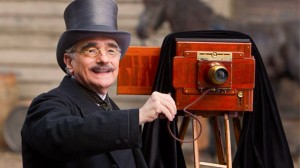 Hugo is a beautifully made film with a big heart. Every frame is overflowing with the director, Martin Scorcese’s, obvious love and enthusiasm for the medium in which he has immersed himself during his career. Every part of the film fits together as neatly and as intricately as the clockwork mechanisms that feature so frequently through the course events. The wonderful cinematography, the precise framing and the spectacular use of 3D effects mean that Hugo is a magnificent spectacle, and a fitting monument to cinema as a medium of sensation.

But that’s not to say that Hugo is a particularly good film.

The amazing visuals and the clever technical wizardry can’t disguise the fact that this is a mushily sentimental film and the best efforts of a talented cast can’t bring to life characters that lack depth. The young leads have their charm, but after two hours Hugo’s (Asa Butterfield) damp-eyed, hopeful staring and Isablelle’s (Chloë Grace Moretz) enthusiastic naivety just aren’t sufficient compensation for the emotional flatness of the rest of the film. The supporting cast includes predictably classy efforts from the likes of Ray Winstone, Christopher Lee, Frances de la Tour, Richard Griffiths, Jude Law and even Kevin Eldon but, apart from Ben Kingsley and Helen McCrory, the supporting cast has nothing to get their teeth into. The one notable exception is Sacha Baron Cohen’s performance as the Station Inspector, the hero’s nemesis, whose is part Childcatcher, part Clouseau and part homage to ‘Allo ‘Allo. And yet he is oddly affecting and he does deliver the one laugh-out-loud funny line in the film, struggling to describe the charms of the Bordeaux countryside, he praises the virtues of “the cows and such… mooing… perfectly formed udders.”

There’s also something strange about Martin Scorcese, of all directors, making a film that celebrates the spectacular as film’s greatest attribute. If one were making a list of European filmmakers that Scorcese (so powerfully influenced by Rossellini and the Italian neorealists and Godard and the French La Nouvelle Vague) might have lionised on film, Georges Méliès would not have been highly ranked. Scorcese himself has noted that the re-emergence of a commercial cinema of the spectacular in the late 1970s and early 1980s was an almost fatal blow to his career – which had first prospered in the more auteur-friendly early 1970s. Even in the most commercial films of his later career, Martin Scorcese has never been a filmmaker who appeared to fall for the seductive charms of empty spectacle.

But what struck me most, watching Hugo, was how many of the films I’ve watched recently have not just been nostalgic for past eras but have been about nostalgia. Young Hugo Cabret spends much of the film watching the meticulously reconstructed 1920s Paris through the faces of clocks and it isn’t just that every major character is unable to break from their past but that so much of the film about reconstructing history. Whether it is seeking to rebuild relationships, repair broken mechanisms or restore lost films, Hugo is essentially backward looking.

But it is hardly alone. Midnight in Paris shares Hugo’s Parisian setting and its obsession with the past. Woody Allen’s film is a little sneaky, encouraging the viewer to revel in nostalgia by taking us to a past filled with great figures and momentous events while, at the same time, arguing that nostalgia is always a mirage. As an aside, both Hugo and Midnight in Paris share a tendency to use Paris and Parisians as a shorthand for romance while populating the city with essentially Anglo-American cultural references (the Fitzgeralds, Hemmingway and Porter in Allen’s film, Harold Lloyd and Christina Rosetti in Scorcese’s).

Recent films as diverse as The Artist, The Iron Lady and Drive have built their appeal on different audiences’ nostalgia for different eras. But perhaps the most extraordinary example is The Muppets, a movie that applies nostalgia on so many different levels that it is almost an exercise in post-modern deconstruction of the idea of nostalgia.

It is a film for children but it relies, for much of its appeal, on the fact that it revives a franchise that their parents (or grandparents) once loved. The film itself is practically a collage of earlier Muppet movies, continuing running gags and in-jokes that most of its (apparent) target audience will completely miss. The levels of nostalgia heap up. The film opens with a musical number set in a small town America, complete with white picket fences and a flag on every home, that would have seemed nostalgic in any part of the Twentieth Century and the America that the story traverses is a curious mix of the past and present. The show that Kermit and his friends put on might, according to the plot exposition, be a television fund-raiser but it all meaningful respects it is a Vaudeville show and The Muppets harks back to an era of entertainment that predates television and film. As an old-fashioned musical, The Muppets uses a nostalgic format to revive nostalgic characters in a nostalgic milieu for a nostalgic audience. Luckily most of the jokes are good and the songs are catchy, so it remains a charming experience.

I don’t suppose we should be surprised that, in difficult times, popular entertainment should pander to people’s desire for simpler, safer times.

But, for me, that’s enough of the past.

This entry was posted in Blog reviews and tagged film, films, review, reviews. Bookmark the permalink.