FRIDAY’S WORDS OF WISDOM: THE COST OF INEQUALITY BY STEWART LANSLEY 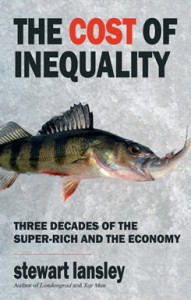 The Cost of Inequality: Three Decades of the Super-Rich and the Economy (Gibson Square, 2011) by Stewart Lansley is an interesting book that seeks to build on recent works, such as Wilkinson and Pickett’s The Spirit Level, by arguing that the case for a more equal distribution of national wealth isn’t just ethical and social but also economic. The grossly unequal distribution of wealth found (especially) in America and Britain has a destabilising effect that undermines profitability and economic growth and destroys industrial dynamism.

Lansley begins by rehearsing the increasingly well-known, but none-the-less strikng evidence for growing inequality in the UK and the US. Lansley identifies a “limit to the inequality that is consistent with economic stability and dynamism” and goes on to identify the creation of a two-track economy.

“The first track, one which makes money out of money, that has provided the superfast route to personal wealth. The ‘money economy’ has and is still being used to deliver big returns to those who control it – a small, powerful group of a few thousand top bankers, financiers and corporate executives running the world’s largest economies. Nearly everyone else, in contrast, has ended up in the second track – the slow lane of the economy. This track – the ‘productive economy’ where new businesses are built, new products devised and wealth and jobs created is the one on which economic success depends… but while the first track is thriving, this one is floundering.” (6)

In 2011 Forbes counted 1210 billionaires (a record, up 28% since the start of the economic crisis in 2007) with a combined wealth of $4,500 billion (up from $3500 bn). Just over one thousand people command wealth to the value of one third of the entire US economy. In Britain the pay of chief executives of the largest 100 companies rose 55% in just six months at the start of 2010 to an average of £5million per year. In 1997 the City “pool” of bonuses was £1 billion a decade later it had risen to £9 billion, with 4000 people receiving bonuses over £1 million and 20 with bonuses above £10 million.

While the rich accelerate away, the rest of the population are being left behind.

Lansley focuses on the share of GDP that is paid in wages. In the 1950s and 1960s this figure hovered around 59% there was a brief spike in the mid-seventies as the oil crisis, stagflation and union power drove the wage share up to 64.5% but by 1980 the figure was down to 59% again and it has kept falling, and now is closer to 52%

“By 2008 the net effect was that wage-earners as a group were receiving around seven per cent less of national income – the equivalent of some £100 billion a year – than they were in the post war decades. It is this shift that has been one of the principal drivers of the increasing economic polarisation of recent decades.” (45)

And the official figures may underestimate the true level of decline for ordinary workers as they include the wages of the elite bankers and financiers whose earnings have rocketed while the rest have stagnated.

The decline in wages as a share of GDP is important because, in a mass market economy, the purchasing power of the mass of  wage earners is crucial. If wages don’t keep pace with productivity then profits are concentrated with owners and there is a reduced market for goods produced. Both outcomes have damaging effects.

“Purchasing power in a domestic economy is determined heavily by the course of real wage growth. If productivity – which determines the scale of output – grows more quickly than real wages, then a dangerous productivity-wage gap develops, one which acts as a powerful deflationary force. Ultimately, this gap is likely to lead to supply rising faster than demand, overproduction, unemployment and recession. The increasingly uneven division of the spoils of growth that has triggered the growing gap in many mature economies has led to a slowdown in the purchasing power of large sections of the workforce, generating a new structural imbalance in the economy.” (57)

Meanwhile the system of rewarding top managers with stock options has encouraged short-term profit taking based on accountancy tricks, asset-stripping and the rapid buying and selling of businesses, all of which has warped the finacial culture.

“The pull of big money quickly transformed boardroom ethics and corporate values. Today’s chief executives have been nurtured in a business culture that values buying and selling above the organic growth that can be too slow to bring success in today’s frenetic climate. Companies sought to grow not through innovation but through acquisition. In the process, many company bosses and boards have become more distant from their businesses, much less focused on long-term strategy and much more on delivering improvements in the short term share price.” (120)

The result of this increased distance and the encouraging of greater risks is greater instabitly. Lansley calls the era of ‘money capitalism” since 1980 as “the age of turbulence” – an era of longer, more extreme recessions that, as inequality continues to rise, may yet result in a disaster even greater than that of 2007. The characteristics of this era are fundamentally different from those experienced in the period of “managed capitalism between 1950 and 1973.

“The most recent recessions have nothing to do with inflation or soaring wage demands. They have much more to do with rising prices driven by excess profits and unsustainable credit, fuelled by financial deregulation.” (149)

Growing inequality and the heavier concentration of wealth, with the accompanying transformation of business and financial cultures are putting the economic system at risk. Lansley identifies four mechanisms by which inequality is threatening our economic security.

While some commentators have sought to present the financial crisis as an unpredictable and external event, similar to the oil crisis of the 1970s, Lansley dismisses this view:

“The forces that drove economic instability were not external shocks that could not have been foreseen, but ones implicit to the great shifts in policy decisions instituted from the late 1970s.” (163)

We live in a political economy that has encouraged the rapid increase in consumer lending to fuel consumption in order to disguise the declining spending power of the mass of the public. These people are struggling to defend their standards of living because there has been a long-term decline in the level of their wages. This demand has created a mountain of debt that has been sustained by increasingly risky financial instruments built with the cash from an elite who have extracted their surplus wealth from profits that were largely generated by squeezing the income of those people who have now become dependent on borrowing. Every link in this horrifyingly circular chain has been created by public policy and deliberate decisions.

The new class of the ultra-wealthy frequently claim that they deserve their wealth because they create wealth in the economy. Lansley distinguishes between the “deserving” and “undeserving” rich.

The deserving rich are:

“a group who deserve their hard-earned places, those who through a mix of exceptional skill, effort and risk-taking, have contributed to increasing the size of the cake, by creating new wealth and in ways which benefit others as well as themselves… Yet the evidence is that an increasing proportion of today’s super-rich fall in to the category of the ‘undeserving rich’ a group who rig the system to enrich themselves by unfairly grabbing a larger size of the cake at the expense of someone else.” (241)

But how can this newly entrenched class of “modern day rentiers” who enrich themselves by skimming off the wealth created by others be challenged.

It won’t be easy. Lansley calls for a set of interlocking measures that aim to tackle the problem at the level of “pre-distribution, the distribution of rewards before the application of state income support.” Inequality is best tackled not by state transfers through the tax and welfare system, which has limits on what it can achieve, but through a new contract with labour: “a guarantee of work and decent wages and the capping of excess rewards at the top. This would require putting inclusion at the heart of national economic policies by raising earnings  floors, securing a better balance between wage and profits, closing productivity-wage gaps and breaking up the excessive concentrations of income and wealth at the top.” (288)

Lansley’s book is wide ranging – it covers a far wider scope than the three decades suggested in the subtitle – and offers an interesting take on the issue of inequality. The key point, which I think can’t be repeated often enough, is that the reforms that created a fairer and more decent society in the post-war period didn’t have widespread support amongst rich and poor because everyone had succumbed to an overwhelming philanthropy. The lessons of the 1930s was that unregulated, unfettered speculation made possible by the concentration of an overwhelming share of national wealth in the hands of a tiny elite was fundamentally unstable. The welfare state wasn’t part of a plot to destroy capitalism, with was a construct designed to support a market economy that wouldn’t continually tear itself apart.

It seems extraordinary that so many of today’s neo-conservatives can’t seem to grasp that their insane worship of unproductive wealth is going to do them, and their class, far more damage in the longer run than accommodation now. They could do with reading and internalising the lessons of Lansley’s book. Or does their self-interest really not extend beyond the end of the noses they have, so firmly, buried in the ‘money capitalist’ trough?

Some may look at Lansley’s programme of reform and dismiss it as too ambitious, impossible even, in an era so dominated by rentier wealth. But, of course, Western democracies have achieved a similar reining in of speculators and the “undeserving rich” before in the aftermath of the crisis in the 1930s. The economic disaster of 2007 was almost in the same class as 1929 but it would be a mistake to assume that we are out of the woods. The trends suggest that, rather than the “credit crunch” proving to be a setback to the elite concentration of wealth, it may actually have accelerated the process and there’s certainly no sign that lessons have been learned by those who have been personally enriched. If Lansley is right that high levels of inequality are likely to make capitalism even more unstable then, if we continue down the path we are now on, our societies may soon be facing a crisis that dwarfs what has gone before.

[UPDATE: This paper from Emmanuel Saez suggests that the proportion of income controlled by the top 1% is rising again in 2009 and 2010 after the set back of the recent crisis.]

This entry was posted in Blogging, Friday Words of Wisdom and tagged economics, friday wisdom, Politics. Bookmark the permalink.

2 Responses to FRIDAY’S WORDS OF WISDOM: THE COST OF INEQUALITY BY STEWART LANSLEY