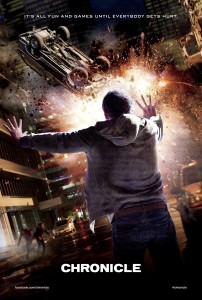 Chronicle is the story of three high school kids: Andrew, a “troubled” loner from a poor family with an abusive father and a sick mother; Matt, his smarter, more popular cousin; and Matt’s friend Steve, the token ethnic character. “Troubled” Andrew has recently taken to carrying around an improbably large video camera, which is lucky because almost at once Matt finds a mysterious hole making strange noises[i]. Displaying the utter lack of an instinct for self-preservation required of characters in lazily-scripted teen horror films, our witless trio plunge into the hole and get impregnated by a (presumably alien) monster. Instead of dying, or having something interesting leap from their chest, our boys get a superpower – telekinesis – and, in a single leap, they cease to be a group of annoying, whiny teens and become, instead, a group of annoying, whiny teens who can juggle Lego, crush things with their awesome brains, fly and get regular nosebleeds.

At first it’s all fun and games (and nosebleeds) and there are some nice scenes where they learn about their powers. But then “troubled” Andrew – in the most blindingly obvious plot development since that iceberg hit that big ship in that movie about that iceberg hitting that big ship – becomes “even-more-troubled” Andrew. First he pushes a tailgating truck into a lake, then he uses his powers to rip the legs of spiders and then he starts killing people, including Steve, who was always doomed because, unfortunately, he kept being black in a film about white people.

“Increasingly-unconvincingly-bonkers” Andrew is faced with his mother’s worsening illness and, needing cash to buy medicine, he first mugs some people who obviously don’t have any cash and then attempts to rob a gas (petrol) station[ii]. The robbery goes astonishingly wrong, the gas station attendant blows the place sky high with a single shotgun blast, and Andrew gets badly burned.

This passage of gross idiocy moves the action to the hospital. “Lying-quite-still-but-still-quite-barking” Andrew is in a coma but his dad comes in and shouts at him anyway. Dad isn’t mad that “silent-but-deadly” Andrew has beaten people to death. Nor does he seem to care about the blown-up gas station. All the carnage and the alien brain powers bother dad not a jot. It turns out that “don’t-think-he-can’t-hear-you-just-because-he’s-wearing-bandages” Andrew chose to start his moronically-minor-league supervillain career at the exact moment that his mother died[iii]. Dad is mad because his son was being selfish, or something. Actually, it’s not really clear what’s bothering dad because his character is utterly incoherent but it doesn’t really matter because he’s only there to move the plot forward along its all-too-predictable path. “Now-somewhat-more-than-troubled” Andrew wakes up and blows up half the hospital, killing shouty dad.

Matt, who has decided he should only use his powers for “good”, arrives and there’s a big fight and all the special effects money gets used up. “Now-not-so-much-troubled-as-completely-batshit” Andrew smashes the police, rips the city to pieces and beats Matt to a pulp. But then, in a last desperate act, Matt uses his powers to chuck a conveniently placed and impressively enormous spear through “no-longer-troubled-because-he’s-dead” Andrew’s heart. And that’s it, except for a nonsensical coda in the Himalayas.

The first lesson is quite narrowly focused, but remains worth bearing in mind for special occasions: if you are a supervillain on the brink of establishing your crazed dominion over the planet, don’t tempt fate by standing beneath giant statues of a man pointing a huge spear at your heart.

The second lesson is a warning for Britain. No council in this country would allow a giant statue to stand in a public place holding an enormous and obviously dangerous pointy stick that wasn’t securely welded in place in case it fell out and pinned an innocent bystander (or even a psychotic-teen-supervillain) to the ground. So, if Chronicle had been set in the UK, Matt’s last desperate stratagem would have failed and the bad guys would have won. It turns out The Daily Mail is right, health and safety regulations really are a danger to us all!

But the really important thing that Chronicle teaches us is also lifted from the pages of The Daily Mail: all the stereotypes of black people and young people and poor people they pedal, and the prejudices that go with them, are absolutely accurate.

The film’s portrayal of Andrew’s father is particularly unpleasant. Director Trank and scriptwriter Landis assume that there is no need to explain why this man is a violent, ignorant and cruel drunkard, it is enough that he is poor. We cannot expect a man like him to be capable of any other response to his situation. The idea that the relationship between a working class father and his son can only be expressed through violence is so taken for granted that some reviewers have felt that it added a layer of realism to a fantasy film. But there’s nothing realistic about the character of Andrew’s father – he’s a paper-thin collection of hand-me-down assumptions that reveal only the knot of prejudices at Chronicle’s core.

So Chronicle is as dumb and unpleasant as a bucket of shit, but it is made worse by having to sit through 90 minutes of jittery, fake, found footage. Has any cinematic trick ruined more recent movies than “found footage”? Not even 3D is as consistently distracting. It was a half-baked and annoying idea when it was adopted by low-budget horror movies like The Last Broadcast and The Blair Witch Project in the late 1990s and by the time of Cloverfield it had been done to death. It has been used to good effect once or twice (the Spanish horror REC and the Norwegian The Troll Hunter spring to mind) but there has also been a seemingly endless stream of duds.

Then there’s the fact that Chronicle cheats with its faux footage. First time director Josh Trank regularly abandons the handheld feel so he can have the camera swoop around in dramatic fashion – using his character’s telekinetic powers to justify the camera’s movement – and he’s often forced to fill in gaps with footage from other sources (like faux-CCTV) that only draw attention to his inability to structure the film within the limits he’s created for himself. By the climactic final battle the found footage gambit is dropped completely. This battle features multiple camera angles cutting back and forth between close ups and long shots with only a perpetual, sea-sickness-inducing wobble persisting as a nod to the original conceit. It is another example of the lazy thought-processes at the heart of this very poor film.

Chronicle is profoundly annoying, it is full of lazily sketched characters making stupid decisions solely to advance a by-the-numbers plot and filmed with a slapdash disregard for coherent visual storytelling.

[ii] It’s not a display of great intellect or ambition by Andrew or the scriptwriter and it did make me wonder why he didn’t just steal the drugs from a pharmacy.

[iii] If only “you-thought-he-was-a-nutjob-before-look-at-him-now” Andrew had waited a few hours before embarking on his brief, murderous, campaign, he’d never have needed to rob the gas station! That’s irony… or pathos… or bathos… or something too complicated for this film to grasp.