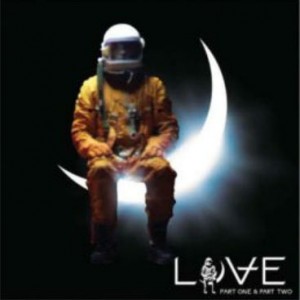 Somewhere in the heart of Love is a very good short film being brutally battered to death by a writer/director intent on driving home his “VERY IMPORTANT MESSAGE” without subtlety. That’s not to say that there aren’t good things in Love, but you have to work to dig them out from a film that is almost buried beneath a landslide of indulgence, borrowed imagery and sloppy thinking.

Love is the story of an astronaut, Captain Miller, abandoned on the International Space Station in 2045 as a mysterious disaster engulfs the planet below. Miller is forced to come to terms with the fact that there will be no rescue and then try to cope with the extreme isolation. There’s a subplot that features an American Civil War Union soldier who escapes certain death in a bloody battle when he is sent to investigate something strange in the wilderness. The action in the film is also intercut with faux interviews of people opining about their experience of the wonders of love and the importance of relationships.

Newcomer Gunnar Wright (previous credits include a handful of TV shows and a lead voice in the videogame Dead Space 2) carries the film as Miller with remarkable poise. For much of the film he’s on screen alone and he manages to be convincing as the practical astronaut in the opening sequences and, as Milller’s moods slips from confusion through anger to desperation, Wright portrays the character’s disintegration with a commendable but affecting restraint. The temptation to slip into histrionics and a welter of actorly tics must have been very tempting but Love is stronger for Wright’s stillness.

Love also looks good. Cinematographer, and first-time writer/director, William Eubank obviously had a very clear vision for what he was trying to achieve with this movie and he manages to maintain a strong visual style on what is clearly a limited budget.

But it is the effort to maintain this visual gloss that marks the point where Love starts to falter. It is all very well that director Eubank should seek to reference Kubrick’s 2001: A Space Odyssey in his movie, he’d hardly be the first director to do so, but there are sequences when Love goes beyond allusion or reference. Indeed there are passages that might have been lifted directly from Kubrick’s work – if Kubrick had been sloppier and less talented. Where, for example, Kubrick went to extraordinary lengths to get the presentation of spaceflight as realistic as possible, Eubank can’t be bothered (or perhaps couldn’t afford) to maintain such rigour (there’s normal gravity aboard the ISS, the space shuttle is still flying in 2045) or avoid plot inconsistencies (a magically repairing life support system, a disappearing space shuttle that leaves a desperate Miller contemplating trying to return home in a spacesuit).  One might overlook these errors in a film that did not take so much, so blatantly, from Kubrick’s superior work but Eubank, in taking as his template a movie that is so fervent in its attention to detail, invites comparisons that cannot help but bring into the sharpest focus every shortcoming in his film.

Love’s greatest failing, however, is that while it strives for profundity and ambiguity, it is actually a rather one-dimensional and obvious film that batters the viewer with its simplistic message.

All the trippy visuals in the world can’t disguise the fact that the intellectual payload that they’re seeking to deliver is nothing more profound or original than the rather bland admonishment that “people need people”. This homely homily is rammed home at every opportunity during the film. It is in the (over-used) narration, in the faux interviews (distractingly reminiscent of sequences in Rob Reiner’s When Harry Met Sally) and by an extraordinary music track/voiceover that plays as the credits roll and actually instructs the audience on the moral of the film and how they should feel as they leave the cinema.[i]

Here, again, Love’s shortcomings are particularly painfully exposed because it draws attention to the debt it owes better, more subtle, movies – not just 2001, but also Solaris (although it’s more Soderbergh than Tarkovsky) and Moon.

Last year was a pretty extraordinary year for art house sf – Malick’s wonderful The Tree of Life, von Trier’s complex, beautiful but vile Melancholia and the artful Another World all made their own impact. Love is not in their league. While its visuals are often strong, it is intellectually and emotionally slight in comparison. Love is not, however, a total disaster. Had Eubank exercised a little more restraint in his wholesale homage to older, better, movies the flaws in his debut would probably not have seemed so stark and its strengths might have been better served.

Love was, at least in part, conceived as an extended promotional video for an album by the American band Angels and Airwaves[ii] and there’s a distinct sense that the weaknesses of the film stem from its origin as a vanity project or, at least, from the indulgence of a friend (Eubank is a childhood friend of the band). Even at just over 80 minutes there are times when Love feels slow because Eubank can’t resist another montage or trippy visual trick. Despite its origins the film doesn’t work particularly well as a promotional tool for the band’s music because, apart from the irritating tracks over the credits, the soundtrack is so minimalist that it almost disappears completely. It’s hard to imagine Love selling many records.

Nevertheless, Love is certainly worth checking out on DVD (a Region One disc is available with the Angels and Airwaves CD Deluxe Box Set), after all how many attempts at serious SF, however flawed, do film fans get to experience each year? Still it’s a shame the writer/director couldn’t deliver a film that stood on its own merits more successfully.

[i] At times Love feels like being trapped back in the late 80s with a loved-up raver who, driven by an E too many and the mistaken assumption that a similar taste in music implies a similar reckless disregard for personal space, believes that everything would be better if we all gave each other a great big hug. I’m not denying the importance of healthy interpersonal relationships, but everyone having someone to love isn’t going to solve the world’s problems any more than bouncing around a field in Essex, locked in a sweaty embrace, while Ebeneezer Good by The Shamen plays for the seventh time that night was about to bring down Thatcher, mate. I’m sure Josephine, Eva, Nadezhda  and Khieu all provided comforting shoulders and caring private spaces for their husbands but it didn’t stop their men all being rampaging bastards, did it?

[ii] Nope, I’d never heard of them either. Apparently one of them used to be in Blink 182.

This entry was posted in Blog reviews and tagged films, review, sf. Bookmark the permalink.