Posted on September 9, 2011 by Martin McGrath 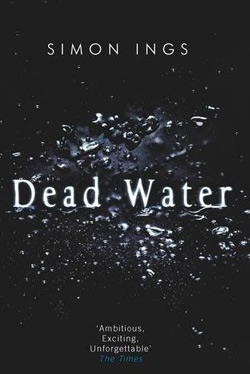 I appear to have misplaced my copy of Dead Water by Simon Ings, which is annoying and makes reviewing the book tricky because my notes are scribbled all over it. If anyone finds a copy in a second hand bookshop somewhere with the phrase “I fucking love this” repeatedly scratched in the margin in HB1 pencil, could you please send it back to me. Of course, thinking about it, it’s possible that those words might be scrawled over practically every copy of this book.

Simon Ings isn’t a science fiction writer anymore. Though he wrote Hotwire, Hot Head and Headlong – three of the best UK entries in the cyberpunk canon – Ings has moved on. There’s still science in his later work – the novel Weight of Number is deeply influenced by mathematics and he’s carving out a career as a successful science writer – but his books, or at least the marketing of his novels, mean he is no longer placed inside the genre. You won’t find his work in the sf section of your bookshop anymore – he’s a literary novelist now.

That shouldn’t put those with a genre-sensibility off this excellent book, however, because there’s still plenty for us in Dead Water. It is possible that neither Mr Ings, nor his publisher, will thank me for this comparison but Dead Water remains an sf novel in the same way that William Gibson’s later novels, the Blue Ant trilogy, remain speculative. They may not be set in the future. They may not feature wild technologies. But they share the same interest in unpicking the modern world by pulling at the threads of technology and science.

Dead Water delves into the world of container shipping (and the global economy of piracy and shady dealing that leaches off it). Ings takes a subject that could be dry and makes it fascinating. He has a genius for making his info-dumps (and there’s no doubt that he’s done his research on this stuff) genuinely gripping. I’ll admit a soft spot for novels where the writer teaches me things I didn’t know, and Dead Water tickled that particular personal fetish very satisfyingly.

However, what makes Dead Water stand out as a novel is the way that Ings takes a conceit – the movement of liquids and gases (particularly water) in perpetual turbulence – and wraps that up in recursive levels of meaning in the text. It’s not just that so much of the action occurs on or within sight of the ocean or, most obviously, in the descriptions of people being engulfed by water in the ocean, in floods and tsunamis but more subtly in the ebb and flow of his characters lives, in the way they find their positions constantly churning and unstable, the way the whole world refuses to stand still.

Dead Water is a novel thick with intertwining thread plots. Opening in the Arctic with excursions to Norway, the Middle East, India, South Wales and London (amongst other locations) the plot, somewhat discursively, follows a red notebook – in which a doomed polar explorer and oceanographer (whose name I can’t remember, damn that lost book) has written his revelation about the nature of waves. I’ve tried several times to summarise the plot neatly but, really, there’s so much going on that it’s impossible. But for all the complexity and sheer packing in of stuff the novel never overloads the reader and it does that most difficult trick of all, it maintains an effective balance between all the competing threads. I found each part of the story equally gripping. Whether it’s the machinations of the ex-spy David Brooks, the torment of Erik Moyse, the tangled investigations of the tragic Roopa Vish or the wanderings of the dead twins, transformed into Djinn, I was genuinely hooked by every part of the story. And, in the end, Ings brings it all together in a most satisfying and revelatory fashion.

The reason for this success lies in Ings facility with characters – he manages, in relatively brief sketches, to create characters that are not just instantly believable but for whom I felt a genuine connection almost at once. Of course that’s a double edged sword because, as an author, Ings is a cruel bastard who then goes on to torture most of the characters mercilessly. The bad get punished but so do the good. I don’t think any of the characters make it out of the story unmarked in some more-or-less gruesome way. He succeeds in getting you to care about what happens to these people and then he beats the living shit out of both them and you.

Dead Water works. It’s a really entertaining read but it also has depth and scope.

And I don’t care what the author or his publishers claim – this is a novel that contains more than enough speculative elements (it’s got ghostly, quantum Djinn twins and someone time travels, ffs!) that should be considered for the Clarke Awards.

PS. Read the novel then take a look at this gallery of pictures Simon Ings posted online that illustrate his research and some of the locations in the novel. I found it complemented my memories of the book very nicely.

This entry was posted in Blog reviews and tagged review, sf, Simon Ings. Bookmark the permalink.