So I was reading a story submitted by an author in a writing group I belong to and he’d decided to write a story with a political background. It was supposed to be set in the future but he couldn’t resist dropping in one of those slightly ranting asides about the present state of the nation that are the punji-stake-floored trap that skewer so many writers who decide to have a stab at writing explicitly about politics. These traps are particularly deadly if your understanding of the political situation is drawn only from the soul-sucking, half-witted jabbering that passes for political debate on our national media.

So, what was the trap my colleague fell into? Well I’m not going to quote him directly, but it went a bit like this – the story is set about twenty years in the future and a character is monologuing to himself:

“Prime Minister Harlow’s honeymoon with the electorate hadn’t lasted long. The emergency budget, just three months into his term of office, had seen to that. Not that he had any choice. Anyone in his position would have had to do something about the ballooning deficit – the global markets didn’t leave any room for manoeuvre.

“Harlow measures were modest, but while the British public might have sworn blind to the pollsters that they wanted someone to come in and sort out the economy, sd soon as Harlow had raised taxes a little and cut spending a bit they’d turned on him like a pack of wild dogs.

The public wanted the mess sorted out alright, but only if they, personally, didn’t have to give anything up to pay for it.”

Now my colleague is hardly alone in this assessment of the British public or, indeed, the analysis of the fundamental weakness of modern social-democratic economies.  (And I don’t want to sound like I’m insulting him or calling him stupid – I’m not. I think he’s wrong but this the “common sense” opinion of many economists and politicians – it’s part genuinely held political opinion by those who tend towards doom-mongering and part highly effective propaganda distributed by those who want to railroad us down their chosen path to “economic salvation”.) In particular it has been refined by the UK’s current government to justify their policies – it goes (somewhat crudely stated) like this:

“Economies are in crisis, dramatic action is needed or disaster awaits but our political systems can’t deliver it. If we don’t cut the public sector to shreds, we’ll all end up like Greece but the bleeding-hearts are too cowardly and the public too venal. Someone has to take the tough choices for the good of us all!”

The “debt crisis” has become the foundation of every ConDem justification for the shredding of the public sector. But, while the sharp up-turn in Britain’s levels of debt is something that needs to be dealt with, a quick look at the chart below reveals a number of interesting facts. 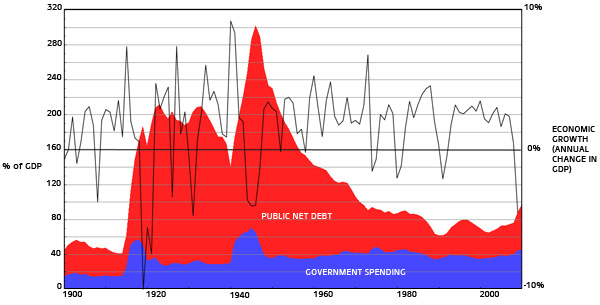 So what does all this tell us?

Well, first it tells us that the political system is perfectly capable of delivering policies that reduce debt. We are neither helpless spectators nor venal contributors to economic disasters caused by debt.

Second, while our current levels of debt do need to be controlled, the historical evidence demonstrates that we did sustain similar (and much higher) levels of debt in the past and probably still could, if we had to. Britain has never been on the verge of becoming another Greece or Portugal or Ireland (God save her!) – this is not a “debt crisis”, it’s much more of a “debt potential threat if we don’t do something quite soon situation”.

Third, it suggests that in normal circumstances (i.e. outside global wars with Germany and her allies) British government spending has relatively little relationship to the level of debt. British public sector spending has been more-or-less steady as a proportion of the national income since 1945 and debt has fallen (and risen) again regardless.

And finally, it tells us quite clearly that if your goal is, genuinely, to cut debt (rather than to use debt as a screen to hide ideological attacks on the size of the state) then your economic policy should be built around the pursuit of economic growth. British history since 1900 shows that real debt reduction only takes place during times of strong and sustained economic growth.

Now no doubt you’re thinking that I’ve taken an aside in a short story a bit too seriously. And maybe I have, but the problem with expressions of the “common sense” view of politics or economics is that it so consistently favours the forces of reaction and retreat. It has become “common sense” not because it accurately reflects our world but because it serves a purpose. It needs to be challenged and exposed. So I did.

This entry was posted in Politics and tagged debt, economics, Politics. Bookmark the permalink.